It’s June, which we love not just because it means more drinking in parks, more taps aff heroes and less sitting indoors calling folk wankers on Facebook, but also because it’s Pride season. Edinburgh pride brought us all the joy of standing around ogling at some wee boy who was maybe in x factor once. it’s always the smaller, shittier version of Glasgow‘s. My first ever pride was in Glasgow and because of the people who go, it will probably always be my favourite.

Last year we marched round the city, photobombed Ruth Davidson at the Better together stall, had a drink on Glasgow green and saw Heather Small! I understand there is anti-Heather Small content on this blog, please just ignore it. She is amazing. 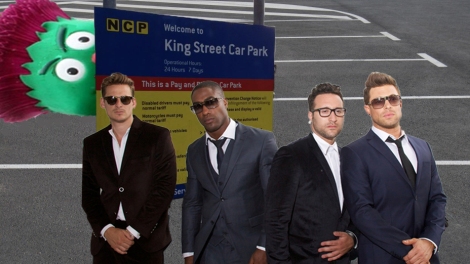 Blue were originally booked for this year but pulled out due to “availability issues.”

There is one problem with my current massive wank over Glasgow Pride: this year the march ends up at a NCP car park on King Street where we will be charged £5 entry. This is important, not only because it’s not worth it to pay £5 to hang about a car park all day, getting charged out your arse for drink to watch some folk from X factor and the infamous No vote swingers, the Krankies.

It is important because this is a significant watershed in the commercialisation of Pride in Glasgow. Without giving you a boring as fuck history lesson Pride originates from the Stonewall riots when a bunch of queer people who were sick of being treated like shit by the police and the mafia, fought back for three days outside the Stonewall Inn in New York. Since then we have had to fight for plenty of legislative changes and continue to fight for societal acceptance.

To this day, there are children and adults in schools, colleges, churches and workplaces up and down the country being bullied, harassed and beaten, made homeless and driven to suicide because of homophobia and transphobia. This year there has been a 22% increase in homophobic crime in Scotland, and every LGBT person the world over has experienced being sneered at, whispered about, spat on, shouted at or assaulted for just being here. Pride is the day we stand together, in unspoken support of each other’s struggle, united in asserting our right to exist in this society.

Being charged entry and cordoned in, like this is a gig, takes away from that. Not only does it give money to horrible cunts like Stefan King who doesn’t give a shit about equality and force me to spend most of my day avoiding Nando’s and Tesco leaflets but it fundamentally shifts the focus from us celebrating our fight for a decent, accepting society to just being a day where we pay to go to the shittiest gig in history and buy overpriced booze so we can stand around with other LGBT people. This isn’t a gay T in the car park. Pride isn’t about Blue, the Krankies, fairground rides or even Heather Small, it is about us being able to have a big celebration of what we have fought for both personally and collectively and is a chance to highlight society’s continued need to fucking change.

When I first went to pride I was 14 and I hadn’t intended to go. I was in Glasgow with my friends and we went through George Square, my friends dragged me into the crowd as I frantically avoided cameras in case one of my family saw a picture. That day, I saw the assless chaps, drag queens, rainbow flags and glitter that go with pride. I also saw all the people just like me who were there to have a good time and give a big fuck you to the family/friends/parents/society that gave them shit. That day made me so much more confident to come out, tell homophobes to fuck off and y’know stop hiding who I am. If we cordon off pride, in some shitty car park and charge £5 entry, nervous teenagers like me won’t go. Teenagers who aren’t out won’t pass by a few times watching avidly, not joining in but returning home feel reassured that they are not alone. Poor people in our community who don’t have £5 to throw away won’t go.  Homophobes won’t have to walk by and be forced to accept that we are here and throw a great fucking party. If we cordon ourselves off, we are not public and being public is what pride is all about.

Now I am not going to start blaming the organisers, they don’t make a profit, are mostly just committed old LGBT folk who are good at organising things, even though their decision last year to ask GCC not to fly the pride flag was pretty shitty. I would say that they were maybe a bit quick to turn to ticketing the event and hopefully will reconsider next year. No, the main responsibility we suspect is with our arch nemesis – Glasgow City Council. In the name of the Commonwealth Games, they will chuck us out of Glasgow Green into a car park, and cut our funding but it’s fine, we have Pride House to show how wonderful and gay friendly we are (to rich visitors from the few parts of the Commonwealth where being gay isn’t a criminal offence). 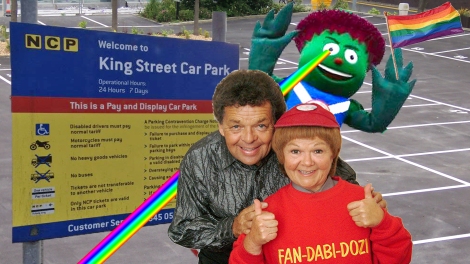 No prizes for guessing who’s behind all this

I will reluctantly pay this year – and pay anyone else in who couldn’t go otherwise – but there is one simple demand for Pride Glasgow 2015: get out of the car park,  get back to Glasgow Green and make it free again. (Also if you could bring back Heather Small, that would be great).

Whose City: Are the Commonwealth Games ruining Glasgow?