If New York is the city that never sleeps, Glasgow is the toon where some fly bastard is always up to something. The rot starts at the top, with the city council synonymous with corruption, cronyism and sheer incompetence. Labour have run the show for 60-odd years, almost as long as the Communist Party ran the Soviet Union, and all that power seems to have gone to their heads… alongside the cocaine (allegedly) (definitely true).

I fully expected them to get booted out in last year’s elections, but they somehow held on, perhaps giving some validation to the old quip that you could pin a red rosette on a monkey and this city would still vote for ’em. Maybe it’s just cos people have given up hope.

The only thing disrupting the inertia is the regular slew of scandals emanating from the Chambers; some hilarious, most of them depressing and all quite outrageous. Nothing lasts forever, especially not with the independence debate in full flow. The regime will fall, eventually. When that golden day dawns, take a moment out from tanning fortified wine and toppling statues in George Square to remember some of these tales of woe.

11. KELVIN HALL OF INFAMY
Easing you in gently here. City Fathers appoint a firm to do up the Kelvin Hall. They apparently forget they’ve done that, and appoint another firm for the same thing. Whoopsies, there goes tens of thousands of pounds of our money. It’s enough to make ye wanna dodge yer Council Tax. 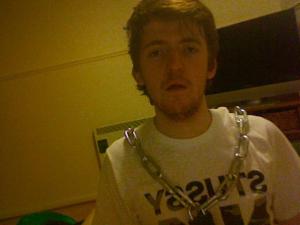 Check out this fucking wide-o. Stalwart of the labour movement and lifelong socialist (FNAR!) Sohan Singh gets, like, totally busted for:
a) Flouting alcohol licencing laws at hotel he bumped off a tax-dodger (still has licence funnily enough).
b) Being one of THOSE GUYS who abuses the disabled people’s blue badge parking scheme.
c) Profiting from renting out flats he’d bought for £1 off the council. Nothing to do with his donations to the Labour Party. No no. Move along, nothing to see here. To be fair, they hit him with a momentous sanction, removing his title of Chief Baillie, meaning he doesn’t get to prick about in a big chain a couple of times a year. Poor lad musta been greetin’ into his bundles of grubby cash.

9. GAMMYGATE
Council leader Gordon Matheson was caught by cops noshing a guy off in a car. The Procurator Fiscal decided there wasn’t enough evidence for a conviction. Just those police eye-witnesses. We’re sure his prominent position was unrelated to the lack of a criminal conviction. Ahem.

8. DRUGS AND THEFT, BUT NO CHARGES
Sticking with exciting criminality, let’s talk about Matheson’s predeccesor, Stephen Purcell and his bezzer, ex-socialist sell-out Ruth Black. Stevie ended up having to stand down, fearing blackmail after it revealed he was up to his nostrils in the white stuff (no, not milk). Strathclyde Police (RIP) even sent a couple of officers to have a friendly chat with him, about how it might not be such a good idea to hang around with known gangsters. Standard. The old SSY blog went a bit daft about this.

Ruth’s rise and fall was equally woeful. Me and her were both in the SSP once-upon-a-time. At a meeting shortly before the split, she accused me and another comrade of “trying to feather their own nests” for pointing out that Tommy Sheridan was a liar. She was duly elected as Solidarity’s only councillor in May 2007, before defecting to Labour in December of the same year. Her reward was to be put in charge of the Castro Centre, despite previously running the old LGBT Centre into the ground. When – just like the old one – the new centre fell apart amid allegations of corruption, the police stepped in and she was deselected by Labour. Paul Ferris was a regular visitor and Black was accused of being a drug-dealer. Great goss!

In May 2012, Ms Black stood as a candidate for ‘Glasgow First’, failing to gain election. Our loss, surely.

7. CREEPS IN HIGH PLACES
Gilbert Davidson. Remember the name. Don’t sit next to him on the bus, The guy is a manky creep. But he’s well-connected, a friend of Mafia Don/Labour donor Sir Willie Haughey, so he’s still a councillor. Scum. He’s been outed for groping and harassing female colleagues, which I’m willing to wager is the tip of a boak-inducing iceberg. Gilbert earns bonus bastard points for threatening to get the disabled son of a politician sacked if she voted against the administration.

6. GEORGE SQUARE FIASCO, MAJOR CRIMES INVESTIGATION
Noo this is a big yin. Anyone who has visited George Square in recent years will know the place is a dug’s dinner. Where once there was a verdant oasis, there’s now a big load of ugly tarmac. The square has a lot of history, including being the launchpad for the mini-insurrection of 1919 which ended with tanks on the streets. The STUC objected to this denigration of radical history, but then the council said they’d paint the tarmac red so everything was cooshtie. IKR?

Anyway, since everyone now hates the place (except the corporate sponsors who get to hire it when it suits them), a competition was launched for a redesign. Matheson took time out from rummaging in his glovebox to “drive a coach and horses through EU procurement law.” Cue police investigation and this epic, squirmy interview on STV news.

5. IN BED WITH BIGOTS

We’re halfway through, and I’m sure you’re already thinking “how do these guys win elections?” It’s obvious that apathy and residual Labour loyalty aren’t the only factors. There’s also the series of alliances with sinister forces, not least the Loyal Orange Lodge. Matheson denied it, but it’s Glasgow politics’ worst-kept secret. Prior to the 2012 election, a deal was done: the Lodge would mobilise members to vote Labour, in return for GCC allowing Orange marches to evade restrictions caused by a 2010 by-law restricting public processions.

In reality, rather than causing a noticeable reduction in the ridiculous number of Walks, the new rules were mainly used to clamp down on progressive marches against austerity, fascism and sexism. Didn’t bother us, we just had a bunch of illegal demos instead.

4. GOLDEN HAUNSHAKE
After a long career as a well-paid Council bureaucrat, Ronnie Saez was appointed Chief Exec of Glasgow East Regeneration Agency in 2007. The anti-poverty charity was dissolved into a wider Glasgow R.A. in 2011, meaning big Ro’ lost his job. He was given a pay-off of £500k+, including £232,000 in a ‘discretionary’ top-up. This was decided by Labour Councillors Jim Coleman and George Redmond, who coincidentally still have shared business interests with Mr Saez. The charity regulator described this as “misconduct” and “wholly unsatisfactory.” Somehow they got off the hook. I wonder how many strings they had to pull for that.

A member of the Labour Party, Ronnie has now set up as a thousand-quid-an-hour consultant on equal opportunities, proving he at least has a sense of humour.

As part of a land clearance to make space for the Commonwealth Games, Margaret Jaconelli had a Compulsory Purchase Order (CPO) placed on her house in Dalmarnock. The Jaconellis didn’t want to leave the home which they’d lived in for decades and raised 4 kids in. When GCC offered a derisory £30,000 for relocation, Margaret announced they wouldn’t be leaving. They were eventually made homeless after the polis smashed through their barricade.

Contrast that with Labour’s approach to Oor Willie Haughey. When they needed a bit of his land for the M74 extension, they decided against imposing a CPO, preferring instead to pay him £16 million.

2. DECIMATING DISABILITY SERVICES
After closing the Accord Centre to make way for a car park for the Commonwealth Games, the Council have now announced plans to close 3 of the city’s 7 remaining disabled people’s day care centres. If they thought they were picking an easy target, they obviously hadn’t reckoned on the tenacity of people who use the centres, whose campaign page is worth checking out.

1. THE BEST POLITICIANS MONEY CAN BUY
In a recent list of the ten highest-earning public servants in Britain, there were 5 GCC employees.

Please, STOP voting for these fiends.