It’s summer and that can only mean one thing – time for opponents of independence to get that sashes out and take to the streets to defend the union from all the nationalists and foreigners intent on destroying it. Since we last reported on the vile ex-UKIP holocaust denier and all round racist Alistair McConnachie officially registering for the No side, the ranks of Team GB have been further bolstered by BNP-splinter group Britannica and most recently, the Grand Orange Lodge of Scotland.  All the racist ducks are lining up in the No row.

“So what?” I hear you ask. Isn’t this just guilt by association?  It’s not like any of the official campaigners would want anything to do with this mob and their racist fleggy rhetoric, is it?  Except the Lodge and the Nazis are officially registered campaigners and the mainstream has shown it’s not above playing on fear of the future, fear of the unknown and fear of the foreign – even if it’s wrapped up in a cosy, jingoistic packaging.

Team No & Co. have been cracking out their finest fleggery over the last week, what with the culmination of Armed Forces Day across the whole UK being a big militaristic parade through Stirling, coincidentally timed to coincide with the Bannockburn commemoration taking place in, erm, Stirling.

Although they may not (all) be marching around banging drums about it, Better Together has proved adept at scaremongering about how foreign everyone will suddenly be and  the London-based spin campaign that is “Vote No Borders“ recently offered up this terrifying vision of being a child stuck on an island full of old foreigners.  Are you scared yet? 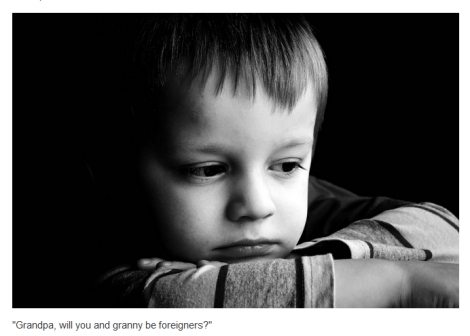 Vote No or this wean will cry.

Speaking of borders, the low level fear-mongering about how an independent Scotland would be incapable of issuing passports (unlike Britain which is doing so well) and would be unable to cope with hordes of Geordies descending on Border towns in search of free prescriptions, has been an ever-present straw man in the debate. Despite no-one campaigning for independence ever saying/suggesting/implying that there would be either the need or the desire to erect a border, we’ve been subjected to constant chatter about how we want to put up checkpoints, build borders and construct a new Hadrian’s wall.

This week, we came full circle as calls for guards at the border were being made by those on the No side –  not by the BNP splinter group nor from our most Loyal of Orders, but from the man who’s alleged to be our great hope for a better future as part of the UK, Ed Miliband.  Hopping aboard the big red bus, the Labour Leader warned that if Scotland were to reject the current trend of brazen immigrant bashing and xenophobia in favour of a more just immigration and asylum policy, he would have to consider guarding the border, to protect his beloved England from foreigners.

Coming to Scotland to tell us we’d better not be less racist than he’s planning to be is probably not what Ed Miliband got involved in politics to do. It’s not that anyone is suggesting he’s suddenly a knuckle dragger who wants to build walls and kick people out of Britain – just that he’s so spineless that those things could well happen on his (border) watch.  His predecessor Gordon Brown was quite happy to call someone a bigot when he thought his mic was off, yet he relied on recycled National Front slogans when he thought we were listening.  Labour cried “British jobs for British workers” and then had the cheek to ask who let the bigot in. 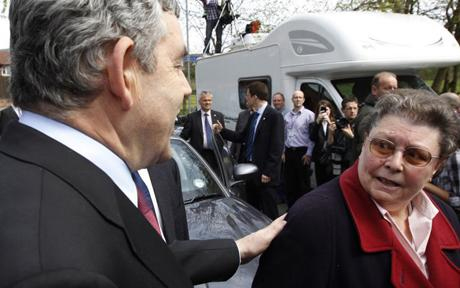 Gordon Brown later apologised for his rare moment of honesty

Labour are again frantically dashing to pull up the drawbridge and get the bunting out, in a vain attempt to chase after those who have ended up voted UKIP. Failing to realise that it’s not just racism that attracts people to Farage, they reckon that instead of offering an alternative to austerity, unemployment and misery, they can just be a bit more racist and win everyone back.

It’s highly doubtful these tactics will have any success in those marginal constituencies which will determine whether the Millipede’s many legs will be galloping towards Number 10 but the underlying message is that Scotland remains nothing more than their Irn Bru crate, which Labour politicians can stand on at any time to reach the much more important voters living elsewhere. 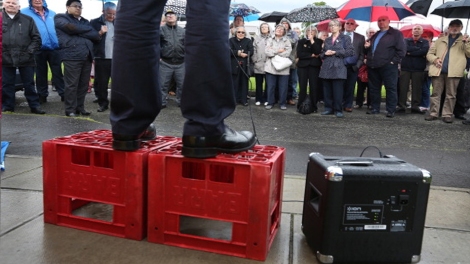 The fact the Labour leader is prepared to wade into the referendum debate by making clear he will stop at nothing to defend the floating voter of middle England against all comers, including the non-existent mob of tartan clad immigrants, shows the utterly desperate state of British politics and most specifically, of the party that has taken Scotland for granted for so long.

The truth now facing voters in September, even those who’d really like to believe there could be a future for Scotland as part of the UK, is that Ed Miliband is the only egg in the Better Together basket, your one chance to break free from the yoke of Tory rule  – and he’s clearly just rotten.

The best case No scenario of watching Miliband, rather than Cameron, make a massive arse of everything looks infinitely less desirable than the worst case Yes scenario, where at the very least, we get an opportunity to make a massive arse of things for ourselves. And if an independent Scotland happens not to work out, we can always go and live in Ed Mililand, if we can make it past all the border guards that is…

Labouring a metaphor: A smashing future with Egg Miliband?

Vote No or we’ll shoot