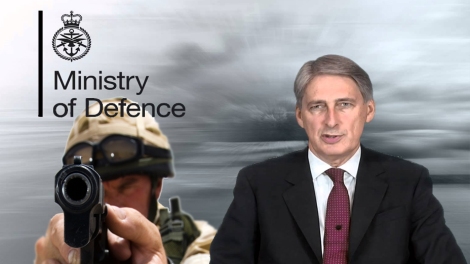 This week, the independence debate has reached its logical conclusion.  Not content with scaring us about everything from maritime borders to passports to pensions, those campaigning to maintain the UK have unveiled their not-so-secret weapon.  The latest claim? If we vote Yes, we’re all going to die.

Defence Secretary Philip Hammond has spent the last few days telling us all  what a good job he does fighting terrorism, unlike the SNP who he claimed had “a dagger poised at the heart of Scotland’s industrial infrastructure.”  No, really. The Daily Mail, so famed for their understated and balanced reportage, covered the release of a Ministry of Defence report about security and military policy post-independence, which they combined with a fawning Hammond interview, under the headline “Scotland ‘more likely to suffer catastrophic terror attack if it achieves independence’” The subtext of the MoD report/Daily Mail rant is that poor, wee Scotland couldn’t defend itself against the myriad of foaming cyber-terrorists and extremists so intent on doing us harm.  Security and military spending are conflated in the Daily Mail world, despite the fact that spending vast sums on Euro-fighters and nuclear bombs doesn’t make anyone any safer, either before or after independence.

We need to ask not only whether we have or can have a competent defence apparatus but what the purpose of defence and security policy is.  Previous attempts to cover the topic of defence policy in an independent Scotland have included the much vaunted Scotland Institute report “Security and Intelligence in an Independent Scotland.”  We’ve covered this in great detail before but it’s worth a recap.  The report basically points out that Scotland could easily defend itself,  couldn’t maintain the current level of military infrastructure, would have to spend money in order to establish a Scottish Defence Force and probably wouldn’t be able to manage quite so many foreign wars.

One interesting assertion contained within the Institute’s report is that a Scottish Navy would be quite expensive, and no-one needs a navy anymore anyway so we‘d be no more safe.  That’s a handy position for supporters of the union to maintain, since Scotland doesn’t have much to speak of when it comes to defending our seas at present. Not so long ago, when a fleet of Russian warships approached Scottish waters, the MOD had to sail HMS York to Scotland to check out what was going on, since there are no maritime patrol aircraft in Scotland, at all.  If you fancy checking out Britain’s nuclear submarine fleet for youself, why not just walk onto the dock, board a submarine and ring the bell, like 2 anti-nuclear activists did back in 2002? The idea that the current UK military apparatus is somehow comprehensive or particularly secure is nonsense.  When Philip Hammond popped up in Edinburgh today, he was largely being shouted at by those opposed to Tory cuts to Scotland’s military and not by us hairy peaceniks.  The military has not escaped austerity Britain, with conventional forces being cut to ensure we get to keep all the flashy pieces of kit we’ve committed to buying.

Will cybertanks destroy an independent Scotland?

Despite dire warning about ever-increasing cyber hooligans, the state currently doesn’t spend vast amounts researching software or protecting its computer systems.  Like everything else, the systems used by the government are made and maintained by private companies who work on a contract basis.  There are no mass of secret agents, huddled within buildings with darkened windows who’re cracking codes and swooping on terrorists.  An independent Scotland will not suddenly get a new Scottish version of the internet which will be really easy to hack or brand new software that no-one has ever used before, nor will our security experts suddenly start speaking a foreign programming language.  Scare-mongering about virtual threats and unanswered cyber questions is aimed at a generation who think all this “cyber” malarkey is pretty frightening at the best of times, never mind when you add things like “independence” to the mix.

The contention that we couldn’t keep up the current level of defence spending is highly questionable.  In reality, Scotland contributes £3.3bn towards UK defence budget whilst spending on defence in Scotland is just £2bn. Indeed it is estimated that the UK government spends around 4 times more per head on defence in the South of England than is spent in Scotland.  Scotland gets a whopping 0.83% of MoD contracts and has seen it’s total defensive capacity reduced by a quarter since 2000.  Even if you believe that lots of guns and troops equals security, Scotland is not doing well out of the current set-up. It’s safe to conclude then that we could probably continue, or even increase our level of defence and military spending, if we wanted to.  We could have London-style robocops stoating about, immigration officers hassling people on the Tube, anti-aircraft missiles on top of the Buchanan Galleries, if that’s what we chose to spend our money on. The real question is, should we?

The need for Britain to constantly project its perceived authority on the global stage is every bit as costly as actually keeping us safe. It also places a significant burden on our security services.  We need to be clear that not only would the resources dedicated to military interventions abroad be better spent patrolling our waters or keeping our infrastructure secure, but that a military policy based on constant aggression has negative implications for our safety.  Jihadists weren’t particularly interested in Glasgow Airport (another wondrous example of some random guy keeping us safe) prior to our involvement in Iraq and Afghanistan.  This isn’t a chicken and egg situation – British military policy actively endangers the lives of our citizens, both combatants and civilians.  Ordinary Scots are not served by this kind of interventionism and it’s deeply unpopular in Scotland despite – or perhaps because of  – a disproportionate number of armed forced personnel being Scottish.

John Smeaton: Better as a puncher of burning terrorists than a politician

The UK government can see that people no longer buy their theory that military spending + conflict = security (and even if we did, they aren’t spending any money or getting to fight any wars anymore).  The defence industry so lauded by Hammond and his chums failed in their recent attempt at selling the benefits of a Syrian intervention, even to Tory backbenchers.  Our new Scottish Secretary, Alistair Carmichael, ensured most of the Lib-Dems loyally voted with the Government but the general public are rather more sceptical about the motives of the British state so intent on sending its young people to die abroad.  Supporting a war in Syria became almost as unpopular as supporting the Lib-Dems, with neither proposition attracting more than 10% of the public.

If you’re not buying the UK Government’s theory that jihadists, Assadists or cyber plotters are kept at bay by their military and foreign policy choices, Hammond and the MoD have pulled out the big guns.  The MoD report which Hammond has been constantly brandishing has been seized on by the media as confirmation that the army (that apolitical, unbiased force who exist solely to protect us) would simply not wish to protect an independent Scotland and would remain loyal to the UK instead.  It’s true that some of the more “loyal” elements of Her Majesty’s Armed Forces haven’t been crowning themselves in glory lately but has the debate really degenerated to making claims like this?

The report itself merely notes that the future security apparatus of an independent Scotland is not automatic, we will have to negotiate what bits of it we get, including which personnel.  We already know this.  There is also the suggestion that some soldiers might be quite sad to leave the British army.  We already know this too.  So it’s mainly the media (as usual) who’re responsible for the over-dramatic presentation. They’ve conflated these two facts to mean that all of our military infrastructure and personnel will be seized by London and squaddies loyal to Britain will maraud around gunning down independence supporters in the days following the referendum. Neither Hammond nor the MoD has rushed to correct the flurry of terrifying headlines suggesting the Scottish regiments are about to go rogue on us. This leads us to believe that they knew exactly how the report would be interpreted or even that the report was written to be deliberately presented in such a scary manner.

It suits the MoD to terrify Scots about independence because they have conceded that they have no contingency plans for Scotland and by extension the rest of the UK post-2014. Unless of course those plans involve fantasising about what side Scottish soldiers would take if the remainder of the UK decided to place us under a military occupation. Putting in place transitional arrangements to ensure the security of Scots if they vote for independence is obviously out of the question. It’s a strange kind of neutrality which presents the options as the status quo or, well…we can’t be responsible if  a bullet happens to fly into your back on the way out.

Having failed to make us scared about an independent Scotland’s ability to deal with the threat of foreign terrorist bogeymen or child cyber geniuses, the UK state has decided to scare us about what they might do to us instead.  Holding a gun to the heads of Scottish voters may be precisely the wrong tactic.  When Philip Hammond & the MoD seem to be inciting a military coup against a future Scottish Government, we can’t help but wonder if “Vote No or we’ll shoot” may be the last battle cry of a British establishment who realise they are out of ammunition.

Redefining security and intelligence in an indepedent Scotland

Who are we afraid of?

Enough of this scary militarism

10 responses to “Vote No or we’ll shoot: Hammond’s military intervention in Scotland”