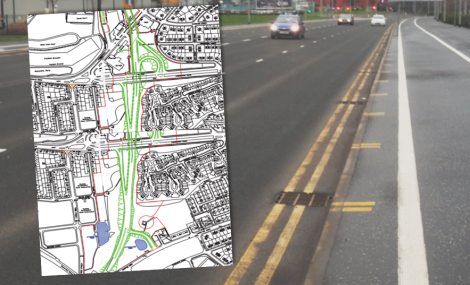 Glasgow is a city scarred by motorways, a legacy of disastrous planning decisions from an era when cars were unquestioningly seen as the future. Sadly, its a legacy we’ve still to escape from.

With every year that passes, the vision of Sixties’ planners who dreamt of a city in which a network of tightly knit motorways, flyovers and rings roads  would “define” the city and the everyday experience of its inhabitants seems to creep closer. Every now and again, a project comes along which shows some sign of disrupting the inevitability of this prophecy, from the fabled Glasgow Crossrail and the East End Subway extension to integrated ticketing and a blitz of publicity a few months ago about (uncosted) plans for a “new city park covering the M8″ at Charing Cross. These projects rarely, if ever, come to pass.

But when it comes to road building, it’s as if the last forty years of developments in science, technology and urban planning haven’t happened. A determination to continue ploughing motorways through deprived parts of the city has been as shortsighted as it has been unrelenting. It’s not been without opposition, from the Pollok Free State to the (duly ignored) official inquiry which came out against the M74 extension, but that has rarely got in the way of it.

This week, Glasgow’s ruling Labour executive will make a preliminary decision on the latest phase of the city’s motorway mania, a four lane behemoth that will scythe through the east end. It comes in at a bargain £60m plus VAT for one mile of road.

But when is a motorway not a motorway? When it’s a “regeneration route” apparently, which is the dubious title which some bright spark at GCC has coined for this latest effort, which is designed to link up a new road near Celtic Park, opened ahead of the Commonwealth Games, and the M8 in the north of the city. It will involve the construction of a viaduct spanning the Glasgow to Airdrie railway line, two bridges and six junctions. The road will cross from east of the Forge retail park, over greenspace near the college on Duke Street, and then continue alongside Haghill Primary School, partially surrounding Alexandra Park.

But given that the “regeneration” of Glasgow’s east end has always been more about attracting private investors and property developers to this part of the city than improving the lives of those who live here, it’s perhaps an appropriate title after all. The proponents of the road – both now and its earlier phases – will point to the untold economic benefits of their project. But parcelling up the east end into a series of business districts does not a community make. It’s also difficult to argue that a giant new road is really for the benefit of locals when it will go through an area with one of the lowest rates of vehicle ownership in Scotland, with 57% having no access to a car.

In a searing piece ahead of Glasgow 2014, the Guardian’s architecture critic descibed the initial phase of the East End Regeneration Route as “driving a violent wedge” through Dalmarnock, unfriendly to pedestrians and with little thought about what it would do to the communities surrounding it. “We expect most people to come by car,” protested Councillor Archie Graham, referring to how people would be travelling to that summer’s Commonwealth Games, at one time mooted to be car-free. “And that’s a busy main road, so it’s no place to cross.”

Some way to speak about a part of a city where most people simply don’t own a car, neatly summing up everything that’s wrong with regeneration in Glasgow. A bit like the so-called East End Regeneration Route.

Whatever happened to the East End Subway Extension?