After last week’s fleg dispute, it would be safe to assume that the last thing Glasgow Pride needs is yet another massive barney.  Unfortunately for them, booking an act most famous for doing a blackface video in which they try to out will.i.am and make jokes about his “big black dick” giving aliens AIDS, is probably not the best way to stay out of trouble.

I’d rather not waste too much time on the publicity hungry “Queens of Pop” who are, at the time of writing, still on the bill for Pride in Glasgow despite fury from people who’re not massive racists.  Thankfully, said “hilarious” video has now disappeared from their YouTube channel (which I won’t be linking to). There are screen caps and indeed some good analysis of all this on various other sources if you want to take the opportunity to be educated/offended in your spare time.  Google them, or even better, just don’t bother.

These two are clearly trailblazers, or some shit

It’s not really some “post-ironic” dancing fannies who’re the problem.  There will always be “artists” who’re completely ignorant or go out of their way to piss people off to get noticed.  It’s all the hoardes of white, gay men who can’t deal with people calling out their racism. I’m going to get straight to the point – racism is a massive problem in the LGBT community and it needs to be called out.  The fact we can’t see power when it’s staring us in the face is a real worry.  Not least, because if we don’t understand that homophobia and racism are problems we need to deal with together, we’re never going to get anywhere.

Blackface has a context we can’t fail to be aware of.  Historically, it was used to portray racist and racialised images of black people and in particular black entertainers.  The outsider as entertainment should have particular resonance for LGBT people.  Images of LGBT people in the media have often followed a similar pattern – we’re tolerated only so long as we’re being witty and comical.  Of course LGBT people, like people of colour have used and subverted this limited power to great effect over the years.  There is no subversion going on here though. An artist is simply being targeted and stereotyped using familiar techniques.  Nothing daring, challenging or original is happening – it’s just blackface being employed in exactly the same way as it always has been.  LGBT people would do well to examine what happens when racism becomes a weapon used against us.

Even yer granny loved Kenneth Williams. Gays were always good for a laugh.

When the tabloids wanted to target gay marriage, they often resorted to tales about the hunners of asylum seekers desperate to take random pals down the aisle in an attempt to obtain entry to our wonderous land of milk and free sofas.  LGBT rights were being targeted with racism as the tool.  If we allow racism to flourish in the LGBT community we are building a rod for our own backs.

Of course, those spewing out self-defence about how totally not racist they are when challenged on social media aren’t pretending to be interested in dealing with racism, or even their own internalised homophobia.  Instead, it’s the usual silencing techniques – calm down dear, cheer up, if you don’t like it stay away, you‘re just boring etc. etc.  Most comically, someone piped up with “I don’t like men in fairy wings but I don’t think they should be banned from Pride”  Mild discomfort/self hate at the sight of fairy wings and centuries of white supremacy are really not comparable.  We’ll be packing our fairy wings for your benefit pal. 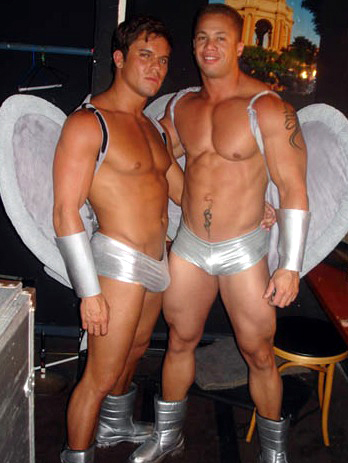 Some in the LGBT community (mostly white, gay men) need to take a good look at themselves rather than attacking those who‘re challenging their prejudices and privileges.  The fact that “AXM was really busy,” when Queens of Pop played there last weekend, is not really an argument.  Drunk, white men thinking racism is funny is not something to be proud of.

Speaking of drunk, white racists, the English Defence League‘s “Scottish” offshoot, the SDL, were out on Buchanan Street with their pals from the Scottish BNP last year, on the day of Pride.  Luckily for them, so were the homo army.  Their tiny band of neo-nazi minions can’t even pretend not to be homophobes in Scotland, so they don’t bother.  The “master race” didn’t quite get passed doing flapping their wrists like you used to do in P6, so it wasn’t exactly threatening, as public homophobic abuse goes.  It was still a delightful sight to watch them be hoarded away by the Polis while I waved a wee rainbow flag in their baldy, racist faces. 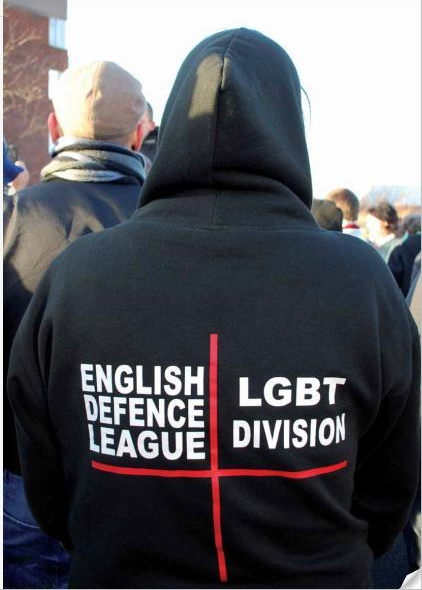 Coz you can’t be a gay racist…honest

Down south, the EDL work hard at pretending they aren’t all just Nazis and have even gone as far as to acquire themselves an “LGBT division.”  Their anti-Muslim narrative seems like an easy sell to gay, white men who are now on their way to at least some sort of legal recognition.  The EDL are looking to the far-right in countries like Holland, who have attempted to hijack gay rights to spread racist hatred with some success.  “Pinkwashing” is a long established technique – using, or rather abusing, LGBT rights to punt a sinister agendas.  The absolute zenith of this technique can be found in Israel, where racial supremacy and ethnic cleansing are wrapped in a rainbow flag in an attempt to get hold of the pink pound/win the propaganda war against those they continue to illegally and brutally occupy.  If you want to see pinkwashing Israeli style – there’s a great examination here (*Trigger warning for all kinds of violent, abusive, misogynistic, racist shit*).

OK, so maybe the people who booked Queens of Pop aren’t about to run off and join the EDL or the IDF.  But we can’t ignore these things in our own community or pretend we live in the enlightened world some of these people seem to claim.  Racism is real in Scotland.  You’re not immune from it because you went to art school or have a tendency for gaiety.  The “post-racial” hilarity reached it’s usual conclusion when the old standard,  “you mentioned race, so you’re the real racists” emerged from the gutter. The super tolerant homos don’t see blackface apparently, they just see face.  I see bollocks.  And believe me, I know bollocks when I see them.

It’s a different kind of racism which just presumes it’s fine to black up.  There may even be a time when it will be.  It’s just not now and it‘s not even close. People dress up as Vikings but then I don’t know anyone who’s been the victim of Viking raids.  I know plenty of people for whom the fight against racism is part of their everyday lives.   There’s a middle class, artsy, liberal presumption coming from the defenders of Queens of Pop that this stuff just doesn’t happen anymore – because generally racism doesn’t happen to white, middle class, artsy liberals.

The post-racial, Hipster Defence League need to wake up.  There’s a reason they think it’s fine for black men to be reduced to “big black dicks” for their amusement. Because basically, that’s all people of colour are to them anyway.  It’s time the LGBT community acknowledged our racism and started challenging it.

The Pride organisers (who let’s face it, were almost definitely clueless about all this), now have a simple choice.  If they want Pride to be a safe space for everyone, they can drop the dodgy racists and let us all enjoy our day.  Or they can say that people of colour (or even just non-racists) don’t really matter so long as “it’s really busy.”  Of course we’d encourage you to spam their Facebook and Twitter accounts, and there’s also a petition here if you feel like letting them know what you think.

You can’t pinkwash blackface. We have to make a choice between a community that’s open to people of colour and a community that’s open to racism and racists.   Glasgow should  stand up and tell all the racists – gay or straight – that they are the ones who‘re not welcome in our city. There’s no pride in racism and there can be no racism at Pride.  In the end, LGBT people would do well to remember that old adage – we’re either all equal or we’re not.

5 responses to “Pride and Pinkwashing Prejudice”