“We like to think of ourselves as a welcoming country,” gushed a Daily Record editorial back in November 2015, just as the refugee crisis was topping the news agenda and as the clamour for the UK to take in those fleeing war in Syria peaked. “Right-minded people will recognise refugees are the ones fleeing terror, not inflicting it. They will be made to feel welcome, or Scotland will have failed to live up to its ideals and reputation,” the newspaper continued.

Fast forward to 2017, however, and the same publication could hardly contain its excitement when it emerged that a suspect in last month’s terror attack at Parson’s Green tube station in London, Yahyah Farroukh, had a connection to Scotland.  Scouring his social media accounts for anything worth publishing, its journalists hit the jackpot and did what any sensible editorial team surely would, rushing to publish the photos of Farroukh’s trip to Scotland to visit his cousin ahead of any their rivals.

And it was compelling stuff: a suspected terrorist posing aboard a CalMac ferry on his way to visit “fellow Syrian refugees” on the Isle of Bute, already the subject of a media storm over its intake of refugees two years ago. The story practically wrote itself, and the rest could just be implied.

It was quickly picked up by the rest of the media, with the Mail helpfull chiming in to dub Bute “Scotland’s ‘Syria Isle'”.

But there was only one problem: Farroukh was innocent. He was released without charge just three days after the Record’s splash which, for the British press, was far less exciting than the idea of a “weed-smoking, vodka drinking” refugee, who “bragged about his westernised lifestyle” and the news was generally mentioned in passing, alongside reports of another man being formally charged with the bombing.

Posting on Facebook, Farroukh’s employers, a fried chicken shop in Hounslow, told of the threats, humiliation and abuse they had faced since his arrest, demanding an apology from the Met police. His mother, meanwhile, had suffered a heart attack after hearing the news.

But what of his Scottish relatives? The Daily Record had seen fit to publish a photo of Farroukh’s cousin, while informing its readers that he now resides in a “a council-owned property in Greenock”. You can read it yourself if you like – it’s still there, unedited and complete with a reference to the then-suspect, now released without charge, as a “London tube attacker”. Which was initially contempt of court, and is now just plain old defamation.

It is hard to imagine what Farroukh’s family, including his relatives in Scotland, have gone through here. In the days after his arrest, they had told reporters that they believed he was innocent and not a terrorist and, as it turns out, they were right. But we don’t need leave it to our imaginations as to what they’ve gone through, as they told STV themselves earlier this week.

“The first thing I felt was fear because I didn’t understand what was going to come out of it. I’ve got nothing to do with what happened,” Farroukh’s cousin, Abo Ziad told the channel. “My youngest son is seven and he’s now scared of everyone. There was somebody who came to check the gas and my son ran away… he fears that someone is going to take him away or take me away.”

Threatening messages were received online. With his wife and two sons, they were forced to leave their house and stay in a hotel for a week under police protection. 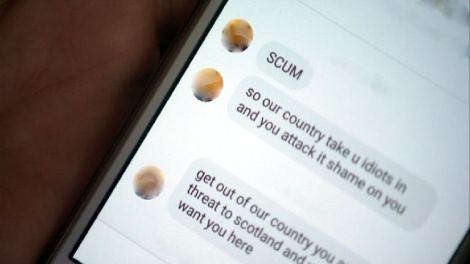 How could such a thing happen in a Scotland that never tires of reminding itself just how welcoming and diverse it supposedly is? Greenock is a not a large place. There are just 23 refugee families from Syria and Afghanistan in the entire Inverclyde area. The threats – serious enough to justify being removed from their house for a week – did not come from nowhere, but were a direct consequence of the media splashing their names and images across front pages and social media:  While a national paper was pissing itself over its parochial take on that week’s big story and an entirely irrelevant “Scottish link”, a family were fearing for their lives.

Whether there was merit in reporting that Farroukh had relatives in Scotland, or had visited here, could be debated but – at the very least – it should have waited until the police had decided whether he was charged. Instead a sensationalist front page, and the surrounding coverage, has simply provided confirmation-bias to any number of myths that persist about refugees and asylum seekers. The social media commentry it provoked was predictably disgusting and even STV’s follow-up piece – which takes until the sixth paragraph to reveal that Farroukh was never charged with anything – led to outpourings of racist vitriol below the line on Facebook.

It’s all the stranger, then, that there’s been very little comment on this – with the notable exception of the Scottish Review – to date. While it has a far from unblemished past, the Record likes to see itself as a progressive voice in Scotland and has spent the last couple of years hounding the far-right in the country. So it’s ironic, then, that with one misjudged front page with mass reach they’ve managed to achieve far more when it comes to setting back the cause of accepting refugees in Scotland than the halfwits in the SDL could ever dream of.

“Refugees will be made to feel welcome, or Scotland will have failed to live up to its ideals and reputation,” they wrote two years ago. Apologising to Farroukh’s family, and removing the creepshots they took of his cousin on the street from their website, might be a good start in repairing the damage they have caused here.

UPDATE – Friday 13th October 18:09: The Daily Record edited the online version of their story at 13:58 today. The only change we can see is a reference to the “London tube attacker”, amended to “London tube bomb suspect”. Which is all the more curious given that Farroukh is not a suspect anymore. The Scottish Refugee Council have also now commented.