Irregular skimmers will be familiar with this blog’s lifelong vendetta against the chancers and charlatans who run Glasgow City Council.  The replacement of the decades old Labour administration with a shiny new SNP led “City Government” was hailed by many as a moment of transformation, as the old monster was replaced with a new definitely-not-a-monster.

A new era for Glasgow?

Every new administration usually has a honeymoon period where they do all the things the previous shower got kicked out for not doing – and one of the most long held grievances against Glasgow City Council was their systematic pay discrimination against women and their refusal to do anything to compensate those affected by it, a position which began to fall apart the more times courts told them they had to.  There were frequent and not unreasonable claims the previous Labour council were deliberately stalling, knowing full well they’d not be re-elected.  Luckily, the SNP’s Glasgow Manifesto was very clear where they stood.  Under the heading “A new era for employment relations for Glasgow City Council”, the manifesto bemoans the fact that,

Significant numbers of lower-paid staff – the vast majority of them women – have waited over a decade for settlement of their equal pay claims.

And makes a clear commitment to,

working with trade unions and others representing women who were victims of discriminatory pay policies with the aim of resolving and settling all outstanding equal pay claims within this Council term.

Back in March, following one judgement against the council for effectively excluding women from bonus schemes, the new leader of the council, Susan Aitken, took to Twitter and confirmed she was sticking with the manifesto pledge.

Met with officers today about this ruling. GCC will not pursue further appeals & will now talk to workers & TUs to agree a fair settlement. https://t.co/y4bXXKWPGX

But it now seems the honeymoon is over for the “Significant numbers of lower-paid staff – the vast majority of them women” who expected the SNP to be on their side when it came to be paid fairly – or even just as much as men – as the Evening Times reports that Glasgow City Council are seeking permission to appeal an equal pay ruling made in August.  While a Council Spokesperson described the move as “procedural”, the GMB Union more accurately called it a “betrayal” and confirmed they hadn’t been informed.

And while the Council leader apparently had “nae time to the Tweet much” during today’s full council meeting, we can only assume an explanation that GCC loved equal pay so much, they were prepared to keep dragging women demanding it through the courts wouldn’t have gone down quite so well with the Twitter faithful.  While many councillors were making their maiden speeches, the “new era of employment relations” was going down outside. 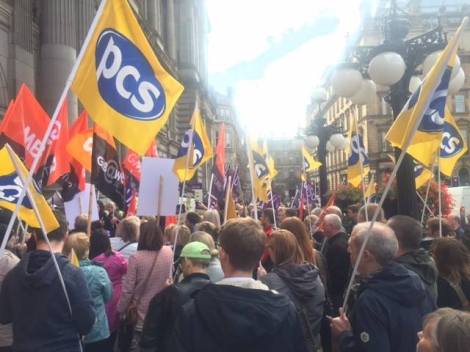 There’s not much we need to say about this: it’s an insult to the thousands of women who’ve been routinely discriminated against that the new administration continue to resist equal pay.  Using the courts is a blatant waste of public money that could and should be put towards settling the claims of those who’ve been short-changed.  If the SNP want to honour their manifesto pledge, they need to “Pay Up For Glasgow” and stop fucking around.

As Glasgow Labour prepared to lose control, are they out of control?

it’s a complete insult to the thousands of women who’ve been routinely discriminated against that the new administration continue to resist equal pay.  Using the courts is a blatant waste of public money that could and should be put towards settling the claims of those who’ve been short-changed.

2 responses to “Why are Glasgow City Council still resisting equal pay for women?”