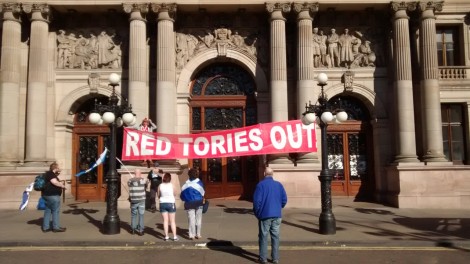 Labour losing control of Glasgow City Council is massive. Lots of us on the left have felt sympathetic to Corbyn for the last couple of years (despite misgivings about his proximity to the SWP) and voting Labour is a genuine proposition again in the upcoming general election. Today’s loss could not be any less about him. Glasgow represents the most concentrated collection of carpetbaggers and gangsters in British Blairite Labour and there’s no shortage of competition. Today they lost overall control of the council with a potential SNP-Green coalition on the horizon. Labour have held power in Glasgow since 1980 – just one year after the first referendum on Scottish devolution was defeated on a technicality and another election of particular significance.

Yes it’s 2017 and we’re still talking about Maggie. Scotland was decimated by Thatcher but the uniqueness and anti-Scottishness of that have been massively overstated by the SNP. Other areas of the UK were hard hit in similar ways but Scotland had the bare bones of a devolved state with a (small) degree of autonomy. So those state instruments targeted by Thatcher could be slightly turned back against her programme of destruction: whether at the level of elected councillors mitigating the worst effects; implementation by workers; or community resistance. This is the foundation narrative of the SNP’s civic nationalist state and, confusingly also the reason Glasgow has been held by Labour for 37 years. Because anti-Thatcher meant Labour for the longest time, and many in the party still think this is enough to win them votes.

Despite 10 years of evidence of its failure as an election winning strategy, they still think that calling the SNP “Tartan Tories” forever will be enough for us to keep electing monkeys in red rosettes. Funnily enough many people remember what Labour were like in power. The continuing scandal of the crumbling PFI schools serves as the best metaphor for what Labour’s anti-Thatcherism has meant in practice, not only in the devolved institutions of Scotland and Wales, but in councils across the UK: from flimsy to dangerous, with the primary benefactors being those in the party who have manipulated its democratic structure for their own profits. In this context the Scottish Labour Party voting against Corbyn came as no surprise. But even after 2007 and 2011, when the slow trickle of support lost to the Nationalists had long since became a flood, Glasgow held firm in 2012 and Labour won by 12%, allowing us to experience five more years of Frank and the gang. Obviously the use of gang here is not meant to imply that the Labour council has been in the pocket of organised crime in the city for years – this blog would never make such unsubstantiated claims.

There are deep seated reasons why the Glasgow Labour vote held up last time out. Labour has done a lot for Glasgow, from the incredible water supply to the city’s council house building programme that was initially the envy of many cities across the globe.

But Thatcherism is the SNP’s foundation story of choice for a reason: the social democratic consensus has been broken, with council housing and just about everything privatised, the rest is history. Labour’s electoral coalition was in part a unionist one and that goes right back to the city’s shipbuilding past. The sector was central to the British Imperial project and was founded upon strong trade unions and a historical exclusion of the city’s Irish Catholic immigrant population. But Labour also won the working-class Irish Catholic vote in Glasgow and beyond for decades thanks to it’s economic and education policy. It included Catholic schools in the Scottish education funding system and it built houses.

The two Labour candidates in my local Dennistoun ward perfectly outline the extent of the party’s decline. Allan Stewart enjoys dinner with private companies paid for by the public purse and Elaine McDougall, who barely tweets, but a rare RT was an Evening Times smear story about the local SNP candidate Allan Casey being a terrorist sympathiser. That she now has to sit across the council chamber from such a scary individual is the least of Labour’s worries.

But harking back to the 1920s for a moment, it was then Labour who were portrayed as friends of the IRA. Particularly Irish-born Independent Labour Party lynchpin John Wheatley. Rumours were spread about his refusal to stand for God Save The King and his preference for singing the Soldier’s Song. The drunken Irish stereotype was used to exaggerate his links to Irish publicans (yes that’s pub, not re-pub, a subtle but important difference) despite Wheatley’s own teetotalism. Wheatley was a misogynist and a racist but he did oversee arguably the most significant improvement in working-class housing in 20th century Britain. To see the modern Scottish Labour Party reduced to the same smear tactics that slowly strangled Wheatley’s political career and added to the stress that contributed to his early death in 1930 is deeply saddening. The SNP broadly winning over the Irish Catholic vote in Scotland will continue to go under investigated compared to the focus on the Orange Order and the Tories.

Back to 2017 and the wheels have fallen off Labour’s electoral coalition of convenience. In council elections plagued by low turnout the pensioners who form a vital, consistent voting bloc appear to have deserted Labour for the Tories. You get the feeling that even the Lodge, despite the long established links with the Labour administration are pushing their members to vote for the Scottish Conservative and Unionist Party. That there is only one party in Scotland with reference to the Irish constitution in their name is significant. Scotland has never nationally dealt with the continued blight of anti-Irish Catholic bigotry, aside from draconian laws aimed at working class football supporters. The Tory strategy of talking about only the referendum, lampooned by the liberals across the board, was an absolute success. It’s just like Labour versus the Tories on immigration policy in England: why would you trust the implicit party of union when you’ve got the explicit one driving a tank through your front door?

Funnily enough the Tories are better placed in a conflict between two nationalisms than they are in a class-based battle between the right and left. The rise of the Greens should be celebrated cautiously by the left. Their policies are vital particularly in Glasgow where any departure from Labour’s suicidal love of building motorways (and dishing out the construction contracts to their friends) must be welcomed with open arms.  The environment is going to have to take centre stage over the coming decades, we just hope the Scottish Greens can shake off the influence of those who think this can ever be a priority under capitalism.

Labour losing the last scraps of power their anti-Thatcherism afforded them still matters. It is a crushing death rattle for the Scottish party but for many reasons detailed above we can celebrate as well as mourn. They’ve had their hands in the till for so long. They’ve used the voter base they thought they could rely on forever to line their own pockets on the back of anti-Thatcher sentiment. So: fuck them.

Can The SNP Really Extend the Glasgow Subway?

As Glasgow Labour Prepare to Lose Control, Are They Out of Control?

Remember The Arches: What Will Council Elections Mean For Glasgow Nightlife?

One response to “How Labour Lost Glasgow”