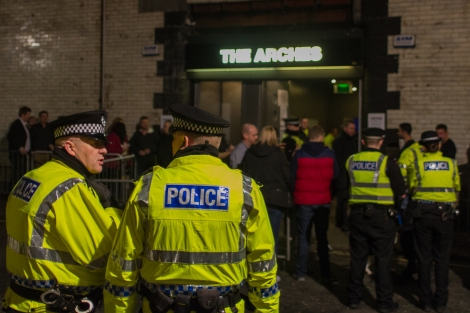 It’s not an issue that has been much discussed ahead of Scotland’s councils going to the polls on Thursday for the first time in five years – yet licensing is one area where our local authorities do have a decisive say.

June 10th 2015 should be a day that is remembered in Glasgow. It was that morning that one of the city’s leading cultural venues – The Arches – announced it would be going into administration. The news came weeks after the venue was stripped of its post-midnight license to hold club nights by Glasgow City Council’s licensing board, following an aggressive and long running campaign by Police Scotland. This was under the misguided pretence of clamping down on drug use, as if shutting one well managed, not for profit venue would stop young people taking pills in clubs…

By removing its ability to hold club nights, they jeopardised the venues’ income stream which had actually managed to achieve that rare thing in the arts: a sustainable business model. Through operating one of the city’s largest club venues, profits were poured into an extensive cultural programme. Many of Scotland’s leading lights in theatre and the arts would not be where they are today without the support they received from The Arches and the community it fostered. At the same time, the city lost a vital club space at the heart of the city centre that has not been replaced.

The cavarnous arches below Central Station from which the venue got its name now lie empty. Owned by Network Rail, they are – strangely – not even being advertised for rent on the organisation’s property site.

It was a tragedy for the city and unlike so many of the other difficult decisions which cash strapped councils have been “forced” to make over recent years, due to funding short falls, this is one that could definitely have been easily avoided, with no revenue implications for the council.

Decisions like this matter. They say a lot about the city that the city we live, what it values and what it stands for.

In his National column a few days, Pat Kane noted how the (its assumed incoming) SNP administration in Glasgow can barely utter a sentence without namedropping a trendy European capital, with leader Susan Aikten promising to turn Glasgow into a city that “rivals Berlin, Barcelona and Copenhagen.”

“Will [an SNP] Glasgow abolish the last call for drinking, or encourage young creatives to live in cooperative co-housing arrangements, like Berlin?” writes Kane. “Will we entertain drugs-friendly freezones like Copenhagen’s Christiania – or try to match their 2016 achievement where more bikes are owned than cars?”

Well, will we abolish closing times for clubs and bars? It seems unlikely. As far as cultivating a night life culture on par with say, Berlin or Barcelona, goes, the Labour, SNP and Green manifestos don’t say a word on the subject, despite the council recently publishing a glossy strategy on the “aspirational transformation” of the city centre’s network of lanes into buzzing nightlife hotspots (which is out for consultation until June). An important aspect of Glasgow’s cultural mix is completely missing from the manifestos – despite being at the core of one of the most controversial decisions that Glasgow City Council have made in recent years.

The closure of a night club is obviously far from the greatest injustice to ever happen in this city. But it was a decision that our council actually had responsibility for, rather than their usual excuse for unpopular decisions where they have to “pass on” SNP/Tory (delete as appropriate) cuts.

Ultimately three Labour and one SNP councillor supported the decision to remove the night club license. Superficially this was a formal, judicial decision taken on the basis of what evidence had been presented that day by the police and The Arches’ lawyers respectively, within the narrow confines of licensing law. This is only half the story – it was in truth a political decision influenced by an organised campaign against the club by Police Scotland, who coerced the venue into compiling the case against themselves. The Arches were made to assiduously record door searches and report any findings to the cops, only to find that same evidence used against them at the hearing.

At the time, the newly elected SNP MPs, then just a few weeks into post, did make noises about supporting The Arches and finding ways to “allow it to continue to operate, with or without a reinstated late license”. Green MSP Patrick Harvie put forward a motion in the Scottish Parliament, supported by several SNP MSPs and one Labour MSP, calling on the authorities to reinstate its license and support its future “as an arts venue and as part of Glasgow’s vibrant social scene.” Of course, nothing happened and the venue now lies empty, the organisation that ran it has gone and the music and arts scenes it supported either no longer exist or have found a home elsewhere.

Glasgow deserves better than a local authority that is bullied into making kneejerk reactions on important matters of public safety, drugs and licensing. Turnout in Thursday’s election – particularly among young people – will probably be terrible, a combination of election fatigue, voter apathy and a lack of clarity on what the election is even about. It’s not about referendums or even about Brexit. It is, however, a chance to shape the sort of city we want to live in. Let’s not forget what happened to The Arches and push for something better from our council.

Can The SNP Really Extend the Glasgow Subway?

As Glasgow Labour Prepare to Lose Control, Are They Out of Control?

3 responses to “Remember The Arches: What Will the Council Elections Mean for Glasgow Nightlife?”