Opposition is growing to plans to demolish the Royal Concert Steps on Buchanan Street, with just 3 days before the official consultation closes.

The application now tabled to Glasgow City Council will see the steps torn down as part of a £400m extension of the Buchanan Galleries.  Council speak assures us that the new entrance will be more “user friendly”, with the artists impression suggesting glass doors will now be installed to allow access to the shopping centre, replacing the current entrance system of…glass doors.

As far back as 2008 the Council have been threatening to demolish the steps, which have become an iconic and well utilised public space at the heart of the City Centre.   Despite having only been around since 1990, they are a focal point for a whole array of activities from charity events, performances by artists and musicians, demonstrations and much more importantly, sitting down and having your lunch and watching the world go by.  The referendum campaign served as a perfect example of the role the steps play in Glasgow’s civic life with both Yes activists and no campaigners/Labour councillors utilising the space in the weeks running up to the vote.

The revamped Galleries will now include 100 shops, 25 restaurants, a cinema (backing onto the tallest Cinema in the World…) as well as a hugely expanded carpark, which raises questions both over whether the continued centralisation of all retail within a single mass of glass is of economic benefit to the city and why the demolition of the steps is a necessary part of the plan.  Moving some shops and restaurants in to the centre doesn’t suddenly give people more money in their pockets but it can drain money from other parts of the city and cause struggling business elsewhere to go under.  If the sole aim is to attract tourists, the diversity of both your retail space and your public space matters.  Glasgow isn’t different because we have a big glass shopping centre but choosing to maintain and protect public space in the city centre will stand out.   Instead we continue to put all our eggs in a big glass basket. 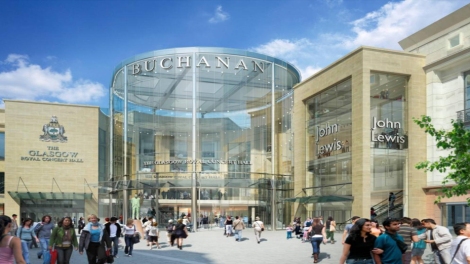 Whether you share our miserablism about the managed decline of late capitalism or not, this is really more about the steps. One suggestion would be to scrap the cinema part of the plan or have 2 less parking spaces, or 1 less shop.   Are we expected to believe the entire development/future of retail in Glasgow rests on the removal of this miniscule amount of public space?  Or is it much more likely that this is a deliberate attempt to “develop” Glaswegians as far away from tourists as possible?

This is not the first time Glasgow City Council have played a role in the destruction of public space (or attempted to), coming hot on the heels of plans to demolish Barrowland Park, rent a section of Victoria Park they can’t legally sell, the botched George Square “renovation” and their embarrassing war against a traffic cone.  It’s clear they intend to plough ahead with the demolition unless strongly opposed – and equally clear that strong opposition has delivered the goods before.

To these ends, if you’re reading this before 5th December, feel free to bombard the council with  objections via email: planning.representations@glasgow.gov.uk

Write to your councillor and ask them what they are doing to prevent the destruction of the steps and sign the petition against the demolition here.

There’s a demo this Saturday (the 6th of December) at 2pm at the Steps…obviously, so check out the Facebook page for the demo and the campaign here and get down on Saturday if you can.

It’s time to step up the fight to defend our public spaces and deliver a message to our local politicians – if you take our seats, we’ll be coming for yours. 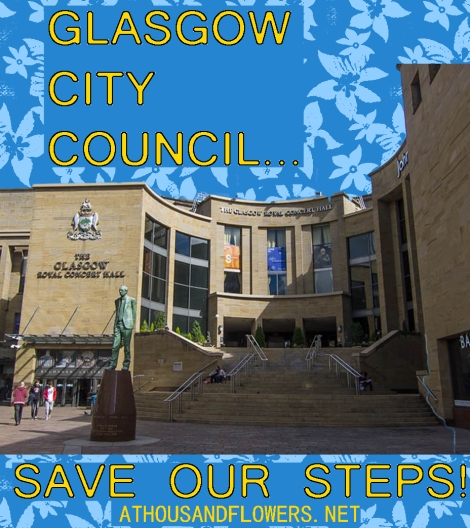 Only a Yes vote can…save the Buchanan Street Steps

The Cone of Destiny: The People vs Glasgow City Council

One response to “A Step too far? Opposition grows to Buchanan Street steps demolition”