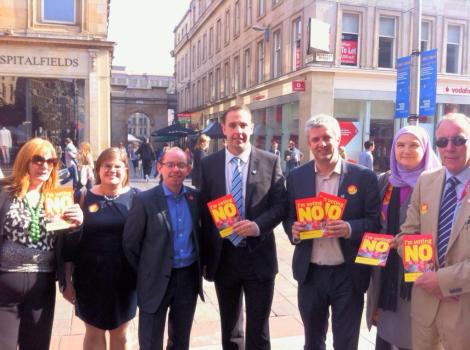 Glasgow Labour Councillors leafleting on Buchanan St today, shortly after 3pm – when a council meeting should have been taking place

The Labour Party have been the subject of a great deal of commentary today, most of it focusing on the Big Red (Gravy) Train that slipped into Glasgow Central this morning and their subsequent saunter up Buchanan Street/Imperial Death March. Much has been made of the fact that after months of  constantly telling Scotland that the decision is theirs alone, panicking Westminster leaders have now resorted to sending dozens of English MPs up to er… tell people in Scotland how to vote.

If that seems at odds with the spirit of democracy, it’s nothing compared to goings on at Glasgow City Chambers, where the entire democratic process was put on hold today because, well… Labour decided they’ve got better things to be doing. As you may recall, one of the key tropes of the referendum campaign from Scottish Labour has been that it’s put “Scotland on pause”, moaning that “Salmond’s obsession with separation” is preventing “real” social issues from being solved, completely ignoring that it’s reinvigorated mass participation in politics and led to voter registration hitting 97%.

This afternoon, however, they seemed quite content to put “Glasgow on pause” in a very literal sense, suspending a full council meeting that was scheduled, every group had agreed would go ahead, and had actually already started. Only taking place once every six weeks, this was the first since the Commonwealth Games finished, and a number of important issues were due to be discussed. Labour’s majority bloc had other ideas, shutting down the meeting after 15 minutes and adjourning it until after the referendum.

A Thousand Flowers understands that the Labour group had been planning on allowing the meeting to run long enough for their self-congratulatory motion on the Commonwealth Games to be heard. which was the first item on the itinerary.  However, when Green councillor Martin Bartos raised concerns about how an aspect of the Games had been dealt with by the council’s press office, the meeting was shut down immediately. 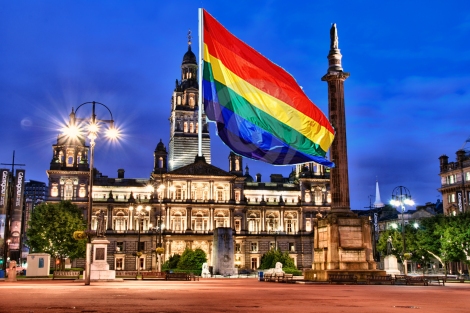 The last full meeting of the council, in May before the summer recess, had agreed to fly the rainbow LGBT flag over the City Chambers as close to the start of the Games “as protocol permitted”, following a motion proposed by the Greens, and for reasons we cover here. This move was initially opposed by the Labour group, before they realised they couldn’t really get away with voting it down. But although the flag did then fly above the City Chambers, they did their best to ensure no one knew about it. Usually a symbolic event like this would be greeted with, at minimum, a press release – like this one  they issued when they raised the Palestinian flag last month, generating headlines internationally. For some reason, they didn’t bother telling anyone about their gesture of flying the rainbow flag at the start of the Games, diminishing its impact and meaning it was only reported as widely as the er, Glasgow Greens website. The Green members of the council had been set to grill the council on this today, among other issues to be discussed, including a motion that would have seen Glasgow City Council take a position on Boycott, Divestment and Sanctions against Israel.

It’s almost like they were playing a game of A Thousand Flowers bingo: gays, flegs, Labour, the Commonwealth Games, independence… it’s truly the story with everything! Wishful thinking aside, it’s in reality just another example of the disdain that democracy in Glasgow is held in by the ruling Labour executive (33 years and counting). They are more than happy to put the city “on pause” when there’s the important matter of taking selfies with Labour MPs to be getting on with. Then again, it also provides an example of the sheer desperation in the No camp just now, whose lack of grassroots activists means they can’t even spare 40 councillors to sit in the Chambers for a couple of hours.


Glasgow Labour had more important things to be getting on with today, like being humiliated on Buchanan Street

One response to “Glasgow On Pause: Labour’s Death March of Democracy”