Given that the past few days have been jam packed with absolute roasters,  this week’s Wanker was a tight contest. Just which nauseating English celebrity, with their bullshit plea to save the union, would we possibly settle on? Fortunately for us, however, a late entrant emerged from more familiar surroundings and managed the soaraway feat of outdoing all 200 of Dan Snow’s Christmas card list.

Here at A Thousand Flowers we give Glasgow City Council a pretty hard time, with the Labour administration providing us with an endless stream of er, “talent”, farcical decision making, PR gaffes and shameless cronyism for us to relentlessly document. Sometimes it’s easy to forget though, that things could be much worse – we could have actual Tories in charge, not just pretendy Labour ones.

As things stand, there’s only one Tory on Glasgow City Council, Pollokshields member David Meikle, a man previously best known for being an arch unionist, opponent of gay marriage, minor Glasgow Twitter celeb and this boaktastrophe. That’s possibly all changed today though, when Councillor Meikle decided to go on a determined and selfless crusade in defence of massacring children, committing war crimes and bombing UN schools. Because making a point of taking an Israeli flag to work with you and spending the afternoon waving it out the City Chambers, on the day that the Council made the symbolic gesture of flying the Palestinian flag for part of the day, can’t really be viewed as anything else in the current climate. 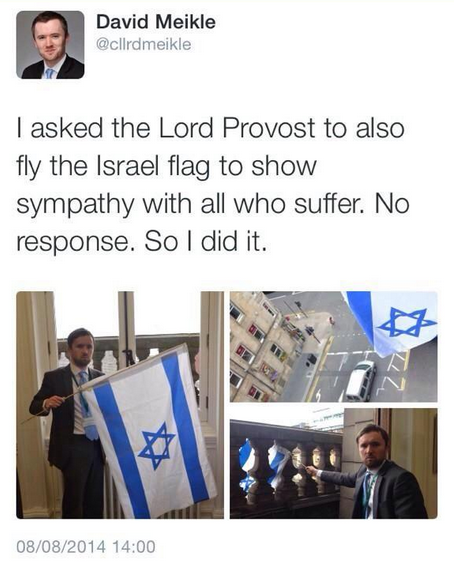 Meikle’s actions are nothing new by Tory standards, with a long tradition of outrageous japes like this, tribalist acts designed to provoke a reaction from pinko lefties and Guardian columnists as much as anything else. Indeed, they had to wind up their entire student wing in the 80s because they wouldn’t stop wearing Hang Mandela t-shirts and vocally supporting far-right death squads in South America. So a reaction to his fleggy fanaticism is surely what Meikle was hoping for, when he tweeted several photos of himself putting on his best glum councillor face as he dangled it over George Square. And a reaction is certainly what he got, with his images going viral on social media over the course of Friday – to the extent that he’s now disabled his twitter account. Given the collapse in support for Israel, reaching as far as senior levels of Government, and widespread public sympathy for the suffering in Gaza, this is hardly surprising. Add in the fact that A) this is Glasgow B) Meikle’s a Tory, and C) he represents the council ward with the largest Muslim population in the whole of Scotland, and his actions suddenly make the rest of his council colleagues look like paragons of virtue, diplomacy and statesmanship. What an utter tool.
————————————————————————————

More fun with flegs:
Last Orders for the Lodge?

Everyone Wanted to Protest in Glasgow on Saturday