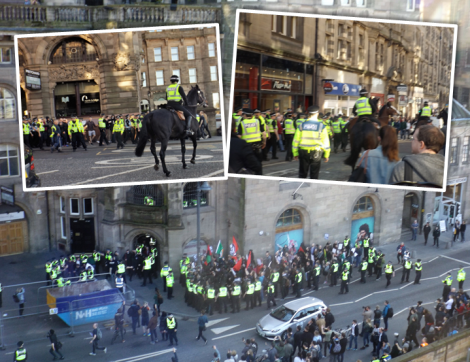 The Scottish far-right suffered their biggest defeat on the streets in seven years in Edinburgh yesterday afternoon, as anti-fascists continually impeded their movements and refused to obey police instructions. This culminated in dramatic scenes as the 30 or so ‘White Pride’ marchers were forced into a humiliating climb down – quite literally – as police held them within the Scotsman steps while waiting for reinforements to arrive at the ground floor and clear their exit. As horses charged anti-fascists on North Bridge, other groups on Market Street began pelting the Nazis with eggs, as they cowered behind police within the Edwardian walkway.

Having attended and reported on dozens of far-right demonstrations since the first emergence of the Scottish Defence League in 2009, they can often be depressing affairs, following a predictable script where the authorities facilitate a penned in shouting match between the two sides, before allowing the fascists to disperse of their own accord into nearby pubs. As we noted after the SDL showed up in Alloa two weeks ago, while it’s important for anti-fascists to show up on these occasions, it is a strategy that clearly has its limits in its failure to prevent the fascists from organising.

Saturday’s demonstration in Edinburgh marked an important change in tactics from anti-fascists. Things started rather differently, however. Early on, a Unite Against Fascism demo gathered outside Waverley Station, where it was mooted that the White Pride demo would also be assembling. However, having heard from the great and good of Edinburgh politics (MPs Ian Murray and Tommy Sheppard), it then proceeded up to the Royal Mile. Other autonomous groups were already gathered there, and intentionally remained outside of the carefully positioned barriers and fencing.

The police had other ideas, and quickly moved in, taking most protestors unaware. 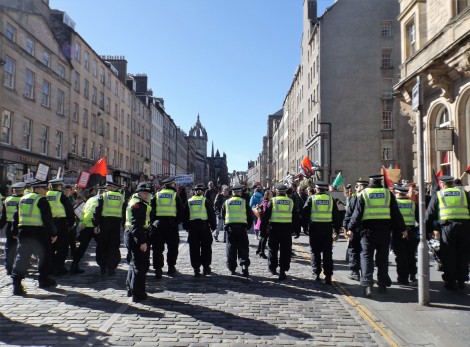 Smoke flares were set off and a minor scuffle ensued as some tried to break the police lines, but this was quickly subdued. The inane chanting of the SWP quickly took over as the “singing kettle” reverted to type. With no sign of the fascists yet – or even any idea when, where or if they were going to emerge – an opportunity presented itself for anti-fascists who did not want to stand behind police lines all day to regroup, sneaking out from behind the kettle.

This was a turning point – not just for yesterday’s victory, but for overall anti-fascist strategy in Scotland, after years of tepid demonstrations behind cop lines. The police were not prepared for this scenario. Some cat and mouse runarounds on the Royal Mile, as the police tried to re-kettle anti-fascists, would end up with them simply giving up – they did not have the resources to have officers penning in small, dispersed groups of anti-fascists. This did come at a cost: a small number of anti-fascists were arrested.

But it meant that when the ‘white pride’ demonstrators did finally appear close to 2pm, anti-fascists could surround them on all sides. As a result, their movements were far mor tightly controlled by the police than would usually be the case. Two Nazis were arrested – it is believed that this was for doing straight armed salutes. 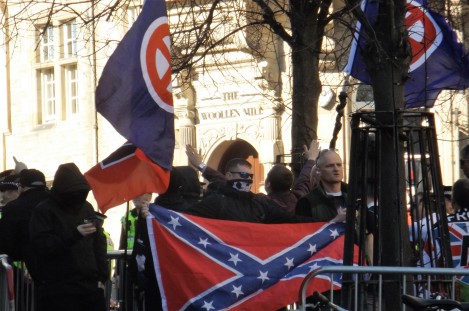 When time was up for the Nazis, the police faced an enormous challenge in how to get rid of them. Dozens of officers were drafted in, forming a tight kettle around the 30 or so fascists. They were marched from Hunter Square on to the Royal Mile, and then on to North Bridge. Anti-fascists ran down the street, taunting them as they went, as police horses were brought in to try and maintain control.

Funnelling the fash into the Scotsman Steps, which span four storeys between Market St and North Bridge, the police found themselves with nowhere to take them. Another group of anti-fascists had assembled at the foot of the steps, pelting the Nazis with eggs as they were marched down the Lord of the Rings-eqsue tower.

From there, the police began threatening anyone with arrest if they followed the fash kettle along Market Street. Eventually, they were dispersed in small groups into Waverley Station and taken out of the city. 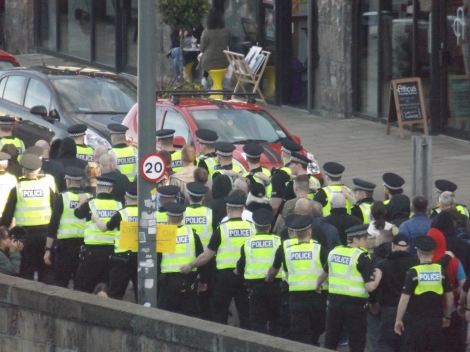 Unfortunately, the price of humiliating the assorted fascist groups who showed up in Edinburgh yesterday – which was only achieved by continually breaching police instructions – was that a number of people were arrested. If you were lifted or know someone who was, support with the court process and financial assistance is available – please contact glitteragainstfascism@riseup.net in the first instance.

The challenge for anti-fascists is now to ensure that the networks which successfully confronted the white pride demo yesterday are consolidated and built upon. The tactics of UAF – which put the notion of outnumbering the fascists above all else – have, over many years, made only a minor impact on the ability of fascists to organise on our streets. What was shown in Edinburgh on Saturday was that even small numbers operating autonomously can be far more effective. We need to learn the lessons of the Battle of Scotsman Steps. 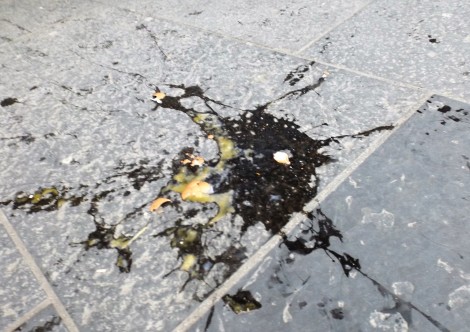 SDL drowned out as Leith marches against racism

The SDL went to England and anti-fascists nicked their banner

9 responses to “The Battle of Scotsman Steps: White Pride Marchers Humiliated in Edinburgh”