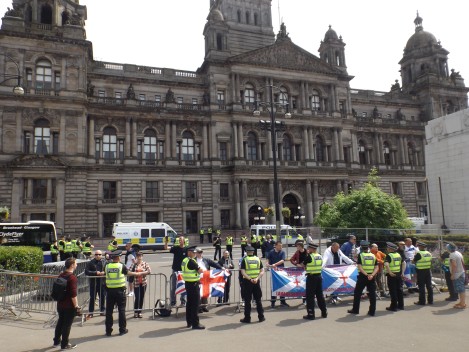 A familiar version of events played out in Glasgow city centre this afternoon as blundering far-right fantasists the Scottish Defence League staged a demonstration against – variously – refugees, Islamism, communism, anti-fascism and the European Union. As coherent as ever, this involved  a rabble of 40 racists standing in a confined pen in front of George Square’s City Chambers, while a larger crowd of a few hundred anti-fascists looked on.

The police weren’t messing about today with over 100 cops and about 8 horses camped out in the square. At first, this was all for about 10 supporters of the SDL. However, numbers were soon boosted by the arrival of various groups of ‘infidels’ – complete with massive England flags – and cultish neo-Nazi youth group National Action.  Also in attendance was Dave McDonald, Aberdeen’s most controversial community councillor and the leader of the National Front in Scotland. 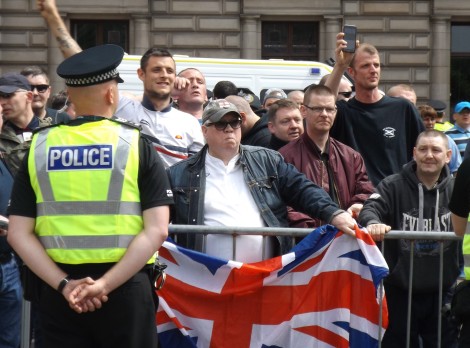 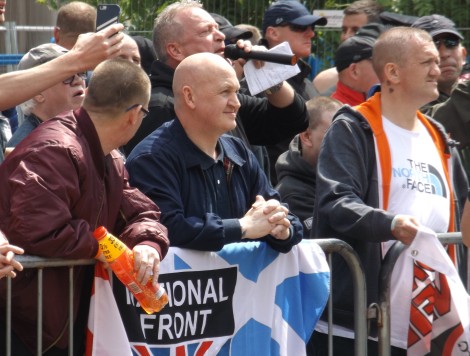 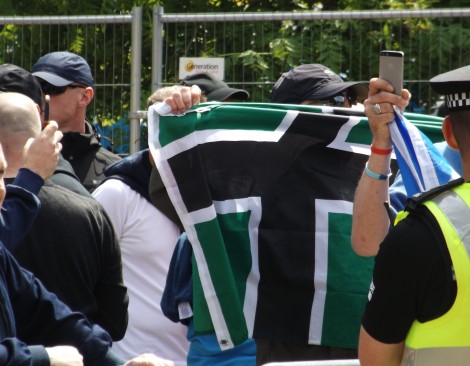 Big fans of “Vinnland”, those Nazis 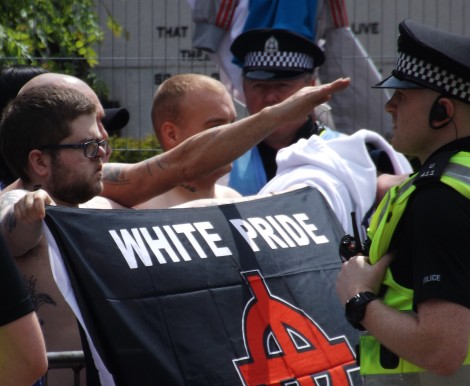 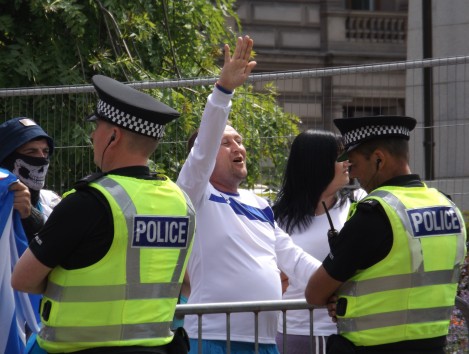 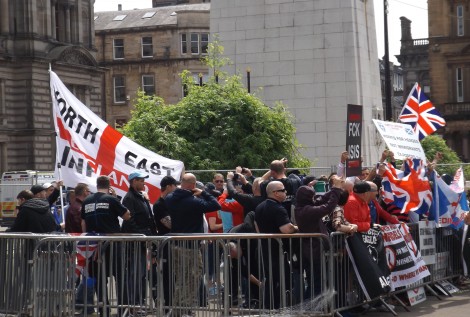 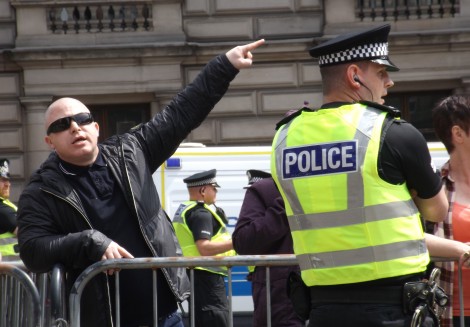 The anti-racist protest, organised by Unite Against Fascism, numbered in the hundreds and was necessary for a number of reasons. It kept the police on edge and meant the SDL were never given much free reign to wander about the square. 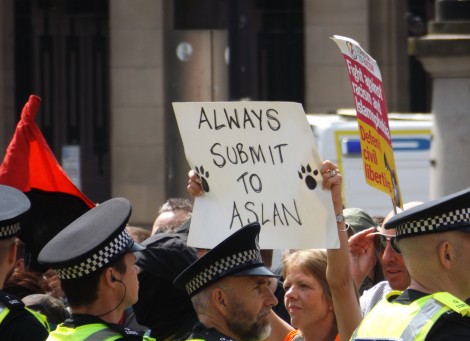 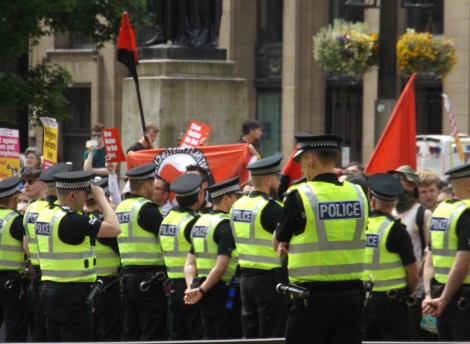 Unfortunately, the counter protest was tinged by a completely unnecessary snobbery, as illustrated by the “hilarious” placard below. There’s plenty of reasons to despise the SDL without attacking them over a perception that they’re just lacking the right number of Standard Grades. Haha stupid racists! Bet they all like football too! 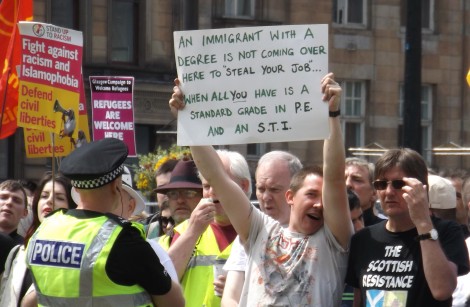 This disconnect was further illustrated when some guy on a megaphone – who seemed to be aligned with an antifa block with syndicalist flags, rather than the main UAF demo – started mouthing off about how the police protect the interests of the rich, and you never see them in “Govanhill and Possil”. The latter point seemed like a strange conclusion; if anything the harassed working class youth of outerlying areas of Glasgow probably got some much needed respite on Saturday, with half the cops in Glasgow instead sitting in vans around George Square.

The SDL and their hangers-on (such as local celebrity “EDL Abdul”) were abruptly shuffled out of the square at 1.30pm. It was perhaps premature for anti-fascists to begin celebrating another great victory at this stage, although they did. The group of 40 SDL were moved along the length of George Street, signing Rule Britannia and sieg hailing as they went. Anyone who it looked like the SDL may find vaguely disagreeable (e.g. being from an ethnic minority) was awkwardly pushed off the pavement by the cops, lest they “provoke” the passing fascists. 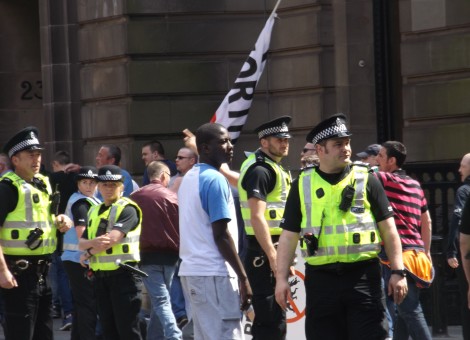 As two SDL supporters tried to start up a (intentionally provocative) chant of “There’s only one Adolf Hitler” as they passed Strathclyde University, one passer-by snapped and had to be held back by his partner. The police rushed over, telling him to calm down because they were just trying to “keep the peace”. How facilitating an unofficial march of 40 fascists chanting inflammatory slogans about Hitler is “keeping the peace” is anyone’s guess.

The remenants of the SDL demo were then dumped in the Old College Bar on High Street, the oldest pub in Glasgow which is more used to pensioners doing karaoke than large groups of tanked-up men with Swastika tattoos. One hour later, two stuffy vans full of overheating cops were still parked over the road. 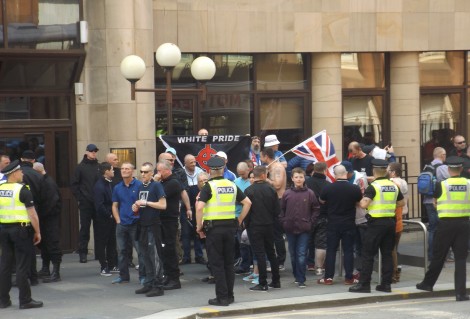 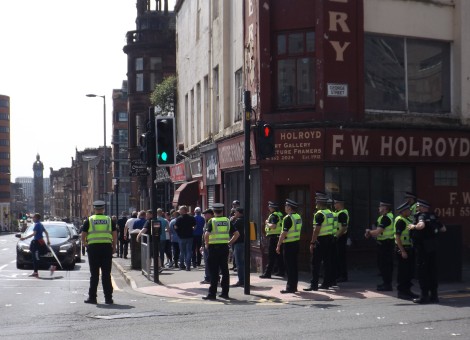 Photos: Nazi Salutes on the Royal Mile as the SDL Protest in Edinburgh

Police Allowed Nazis to Stage an ‘Anti-Refugee’ Protest in Edinburgh