As fabled Glasgow infrastructure projects go, Crossrail Glasgow is up there with the East End subway extension and the airport rail link. Proposals for the project, which would fill the “missing link” in Scotland’s railways by connecting up routes currently split between Glasgow’s two main stations, stretch back decades.

Several credible Crossrail proposals have been tabled over the years, the most recent by SPT a decade ago. It proposed three new stations, at West Street, Gorbals and Glasgow Cross, that would mean services could run from the south and east of the city to the north and west, without passengers having to walk between Queen Street and Central Stations. It would make use of the iconic but rarely used line that runs over the arches at the Saltmarket, above Mono and various retail units, connecting with a relocated High Street station.

But any future proposals to develop Crossrail have today been dealt a fatal blow after Glasgow City Council approved a major mixed-use development on the “High street curve” site that would be vital for creating the link. The £200m high rise plans – from Get Living Group (Glasgow) Limited – are for 727 build-to-rent homes, 99 student studios and more than 3,000 square metres of retail, leisure and business space on a former goods yard site.

Only one objection was registered to the planning application – from Glasgow North East Labour MP Paul Sweeney, a long standing advocate of Crossrail. His objection letter blasts the development as a “strategic error for sustainable transport in Glasgow” that will “nullify the purpose of the potential Glasgow Crossrail scheme.” He has previously alleged that Transport Scotland refused to ask for the site to be protected in the most recent City Development Plan, which makes reference to safeguarding other sites but not the “High St curve” land.

Get Living Group (Glasgow) Limited are – despite their name – not very Glaswegian. You’ll struggle to find them on the Companies House site for that matter too. Rather, they are registered in Jersey in the Channel Islands, with their parent company then owned in an even more notorious tax haven: the British Virgin Islands, at an address that features 8 times in the Panama Papers. Their Jersey and BVI registrations make it impossible to probe their accounts or find out who their ultimate owner is.

On the face of it, more homes being built in Glasgow, not least on a site within the city centre that is lying derelict, is not a bad thing. But all 727 flats, as well as the 99 student “studios”, are intended for private rent, and will be managed directly by Get Living Group. Unsurprisingly, the Section 75 planning agreement between Get Living Group and the council makes no reference to affordable housing provision nor rent levels in the flats being developed. Get Living Group currently operate two similar build-to-rent schemes in London where flats are on offer for between £1,650 and £3,856 per calendar month, which provides an indication of the market segment that they will be aiming for.

“Get Living’s aim is not just to redefine the way people think about, and experience renting, but to go beyond that. Following a concept called ‘neighbourhood thinking’, we create vibrant and well-connected city neighbourhoods, each with its own style and spirit. We are committed to being part of the wider neighbourhoods that we join for the long-term,” states the firm’s design statement. What’s missing, presumably, is the bit about funnelling vast profits to a tax haven while jeapardising a long standing and much needed strategic rail project…

It is all the more frustrating at a time when Glasgow’s transport system is getting a well overdue shot in the arm from the new council administration. The recent Connectivity Commission report (pdf) made a series of welcome recommendations on how we can reorient the city away from private cars and towards pedestrians, cyclists and public transport, in that order. While recommendations on rail will follow in a future report, due in early 2019, the report did note that “Scotland’s railway is facing a crisis of growth”, with huge passenger increases at Glasgow’s stations. It’s ironic that the feted Glasgow Crossrail project has likely now been killed off, in perpetuity, by a planning decision in favour of a tax haven developer. 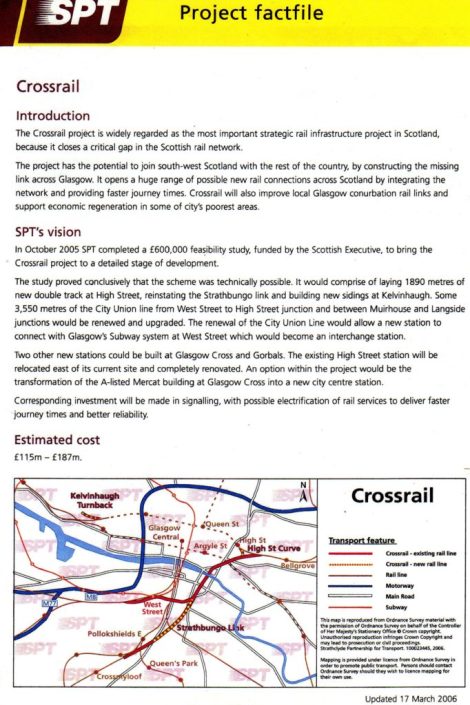 Can the SNP Really Extend the Glasgow Subway?