Scotland is, in the scheme of things, a pretty wee place. Our political class, in turn, does not feel that distant. This is great if you’re trying to get the First Minister to say, endorse your book or come along to your charity lunch, but probably makes running an eye catching current affairs magazine, that markets itself on its exclusive access to power, that bit harder. There are, after all, only so many times you can make a magazine cover featuring a revelatory interview with Neil Bibby MSP seem exciting.

Which brings us to Holyrood Magazine, the country’s only regularly published political mag. Coming out every two weeks, it’s not bad… but it’s not that exciting either. But being a pretty wee place, we also have a terrible tendency to get overwhelmed when someone seemingly important in world affairs comes our way. So it has turned out with Steve Bannon who – as we reported at the time – paid a flying visit to Edinburgh last month as star speaker at an international media conference.

As we noted then, for reasons unclear to everyone except themselves, mainstream commentators love Steve Bannon: ‘He may be the demagogic leading strategist of the international far right, the man behind rolling hate machine Breitbart,  the former chief exec of Trump’s presidential campaign, and someone obsessed by an idea of a great clash of civilisations between Islam and “the west” – yet they will not stop giving him a platform. Because despite all this, liberal discourse would have it that Bannon is someone whose ideas can be undermined by some good old fashioned debate and er, “scrutiny”.’

And so it has transpired this week, in exemplary fashion. “Shades of grey vibe to ⁦@HolyroodDaily⁩ out tomorrow,” was how the magazine’s editor, Mandy Rhodes, previewed the new issue on Twitter a few nights ago. “BLUE COLLAR BANNON” ran the banner heading, overlaying a massive photo of Steve Bannon doing his best Emporor Palpatine impression. We had to wait until Wednesday for the interview to be put online – all 4,438 words of it, dutifully typed up by Rhodes herself.

Calling it softball doesn’t quite do it justice. Interviews with Bannon follow a familiar pattern by now – vague attempts to call him a nasty racist followed by the big ol’ truthbomb that, while they not like his style, his message is one of “legitimate concerns”, of the type expressed by “real people”. As Natasha Lennard writes in the Intercept, these features are “little more than liberal self-congratulation or perverse fascination… this subject-object conflation has informed all too much liberal reporting on the far right, which confuses exposing the phenomenon of racist populisms — the ways they spread, the systems which fuel them — with giving exposure to their proponents.”

So to Holyrood. “The problem with Bannon is that there is an uncomfortable kernel of truth in much of what he says,” writes Rhodes, in one her pitifully few efforts at analysis. Much – in fact most (64% of the word count) – of the article is given over to Bannon who, for entire paragraphs at a time, is allowed to extol the virtues of his particular brand of “economic nationalism”.

He’s just standing up for the little guy, the article surmises, commending Bannon for “at least engaging” with the concerns of ordinary people, while once again allowing him to tell the story of how he, Harvard alumni and former Goldman Sachs investment banker, is just a regular guy from a normal background, and that this is what drives his politics. The far-right have always said this; it doesn’t make it any truer the when they repeat it. But believing this myth is exactly what skews the centreground of politics towards the (far) right. It would be tougher to find a better illustration than Hillary Clinton telling The Guardian recently that she lost because she wasn’t racist enough. 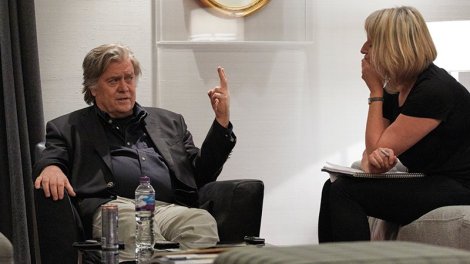 But it is this dying centreground that Rhodes goes to Bannon as an emissary of, her “inherent bias” – her own words – being caught out by him within minutes of the interview starting. But more than willing to concede more ground to Bannon, the author goes on to ask him if he’s actually just jealous of successful, liberal, middle class people – who have, as good readers of Holyrood will know, reached the peak of human existence. Is a “fairly crude inverse snobbery” behind his politics (rather than, say, a peculiar brand of laissez faire capitalist survivalism cum white nationalism backed by oddball billionaires??!!!). No, says Bannon, he really just wants to stand up for little guys. They’re getting a bad deal. He wants to help them. Give them college places and jobs.  The Hispanic and black kids can have them too. It’s just about fairness.

And so it continues for 1,200 words over 13 uninterrupted paragraphs.  Why bother with 13 paragraphs when you could just print 14 words?

We Came, Wi’shaw, We Sent Them Home Again: SDL Sent Packing in Lanarkshire