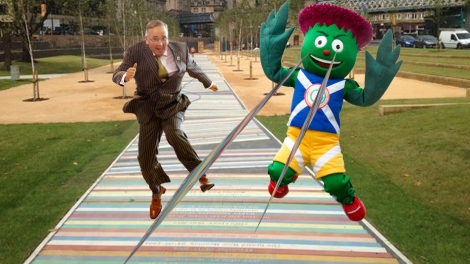 After contributing a mere £620,000 to the creation of a park between London Road and the Gallowgate, Glasgow City Council have responded to the overwhelming positive feedback at the creation of green space in the area, by declaring they can’t wait to knock it all down and sell it off to build more shops and houses.

Part of the much vaunted Commonwealth “Legacy“, the Barrowland Park includes the “Album Pathway” by artist Jim Lambie, a multi-coloured concrete path featuring the names of over 2000 artists and bands who have performed at the Barrowlands since 1983. When it was unveiled in July this year, a gushing press release from Glasgow 2014 declared it “a public open space for Glasgow that acts as a key gateway to the east end of the city.”  So why are we closing the gates now?

The reality is that the park was always intended to be temporary (although the Album Pathway will remain, somewhere), so while this isn’t the scandal of the Council suddenly announcing the mass demolition of social housing or flouting the law by renting public space they can’t legally sell to private developers, it still leads us to ask what the point in spending all this cash was, if the net result is yet more cluttered retail units and posh flats.

The creation of a temporary public park in the Calton is an infuriating glimpse into what our city could be – we desperately need to create and restore civic space and despite fighting a relentless war against parks and all who use them during their tenure, the project will have been worth every penny the Council spent, if we retain it as a useable public space.  There are already many struggling businesses in the area yet the Council seem to have endless amounts of money to “redevelop” the city centre into a mass of glass and shopping – like their masterplan to demolish the Buchanan Street steps and replace that civic space with…more shops!  Centralisation and concentration of massive retail development is of no benefit those running wee shops in the Calton or down the Gallowgate.  There is also  a housing crisis in our shiny “new” East End but yet more poor quality, overpriced private housing stock is not going to solve that either.  None of the array of social and economic problems facing residents in the area are caused by the fact there’s now a nice park there, so 2000 people have already signed a petition asking the Council to ensure it is maintained permanently.

Those in the City Chambers wrote a blank cheque to make sure Glasgow didn’t look shit for 10 days during the Games;   when we were on show for the dignitaries, it was “People Make Glasgow” but now Bolt has bolted, it’s back to “not for the likes of you.”

If the park is there, used and popular, is it beyond the realm of possibility to just leave it alone, given we’ve spent £620,000 on it?  Something stops being a legacy when you have to give it back. 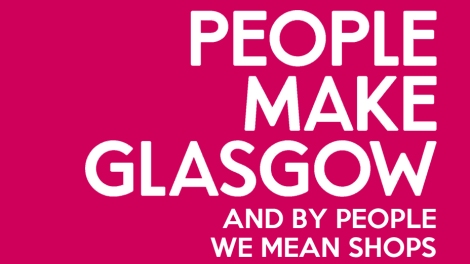