You would imagine that pointing out what a wanker this man is would be a simple task.  Yet, the more I think about it, the more it becomes clear that it’s a life’s work and then some; I could continue writing till the rocks melt with the sun and not get near the tip of this gigantic wankshaft.

I could lambast the folically challenged tycoon for his ownership of Miss Universe (which is actually a more sexist breakaway from Miss World)…no really.  I could delve into his dodgy racism, given that the  tyrannical goblin once told an employee that he hated black people counting his money and that “laziness is a trait in blacks” and who is alleged to have refused to rent properties to African-Americans in the past.  I could suggest that one way to prove you’re not a racist is to avoid saying your political opponents are actually secret foreigners, as Trump did to Barrack Obama.  We could laugh at his forays into being a caricature evil capitalist on the telly, pish ourselves at him lumbering about pretending he’s a wrestler and his seeping rancidity generates enough puns and silly picture ideas to break the internet or at least give me a headache.

Back in 2005, a few residents in a small corner of the quiet village of Balmedie received a mysterious call from a man, alleging to be interested in buying a holiday home in the area, all polite declined to sell their homes.  In 2006, unbeknown to them, Donald Trump began buying up the land around them.  In March 2006, with much fanfare our anti-hero announced that he would building a golf course on his Menie estate.  The sand dunes at Menie are an area of Special Scientific Interest.  They’re also sand dunes, they move, a lot, that’s their thing. 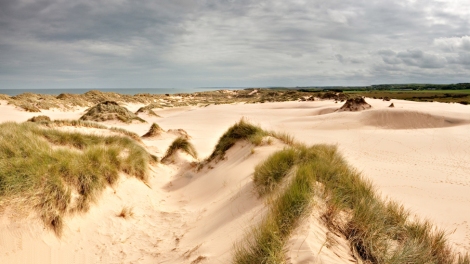 And the house on the sand fell flat.  Donald clearly never went to Calvinist Sunday School.

Not content with a crusade against nature, Mr Trump set about endearing himself to the other residents of Menie, some of whom were rather concerned at the prospect of a gigantic golf course being constructed in their gardens.  On his visit to the area, Trump paused, pointed at a house that wasn’t on his land and declared it was ugly and would be removed – that was only the beginning.  The Trump Organisation had plans for the Milnes and their home.  Despite his estate running to some 800 acres, Trump not only declared ownership of 90cm of their Garage but sent them a letter telling them to demolish or reconstruct it outwith his made up boundaries within 3 days.  His goons later arrived and dumped a “fence” in the general area, sending the Milnes a bill for nearly £3000 for the privilege.  Trump’s “boundaries” were based on satellite mapping which, as Andy Wightman brilliantly deconstructs in his phenomenal Trump Report, would be a much more accurate way of mapping land in some future universe, but it’s just not the one we use in Scotland, where we have those old O.S maps and bits of paper and the land registry.

Then there was Michael Forbes, the farmer whose land was right in the middle of the space Trump seemed to be demanding.  His equipment was destroyed by Trump heavies under police protection despite them having no authority/business getting involved in any kind of civil disputes and despite Forbes showing the police his title deeds.  Trump called his property disgusting and brand Forbes a pig and when his minions built a fence on land which Michael Forbes knew was his and Forbes removed it, the cops arrived and charged him with theft.

The press were nowhere to be seen in all this, heaving praise on Trump’s “Billion Pound Investment.”  The Aberdeen based Press & Journal and their sister paper The Evening Express ran nothing but gushing praise for our Kirby-Gripped Crusader and gave no space to the massive local campaign against Trump, on the basis that one of them was studying in GLASGOW.  It was strongly suspected that this had more to do with the fact that Sarah Malone, the relative unknown but somehow Vice President of Trump’s new development was the partner (now wife) of the Editor of the Press & Journal, Damian Bates.

In stark contrast to the mainstream coverage, I can highly recommend “You’ve Been Trumped” by Anthony Baxter,  which paints a picture of the intimidation faced by residents at Trump’s hands and of the community working together to defend themselves. It’s a rare example of piece of telly which actually helped reshape public opinion; the audience comes to realise that this was or could be happening in all of our backyards. The journalists responsible for the film were arrested at the behest of the Trump Organisation whilst filming, in a move condemned by the NUJ.  Unlike our pals at the Press & Journal, I’ll be honest about declaring my interest in this particular documentary, which just so happens to feature a cameo appearance from yours truly in a past life.  I play the role of a bussed-in-for-the-day, rent-a-mob hack, smoking a rolly in the background and trying to not get interviewed, in case the Press & Journal put me on their front page for being NOT EVEN FROM THERE, like they had with other activists.  It was a local paper for local people…and that guy from America with his “billion pounds” to throw around. 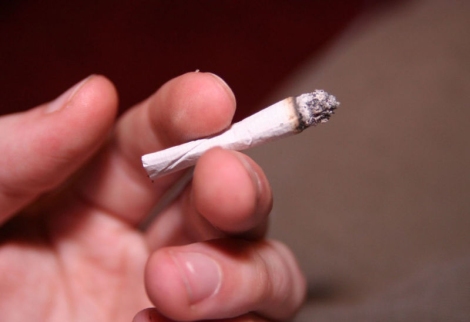 Mumble mumble…Trump…capitalism…would you like to buy a paper? We were all young once.

The actual planning process was a farce but the application was eventually all cobbled together in November 2007. Like all first attempts at planning applications in the known universe, after a bit of wrangling, it was declined by the council.  What happened next was unprecedented. On the basis that since the council hadn’t actually communicated their decision in writing to Mr. Trump, the Scottish Government pulled the application and it was approved a year later.  By 2009, Trump was smugly writing to the same council who’d declined his application initially, to demand they carry out Compulsory Purchase Orders to remove everyone he happened not to like from the vicinity of his course.

The threat of Compulsory Purchase was quietly dropped further down the line but Trump has ploughed on with the course.  Sort of.  It’s open and all that but of the 6000 promised jobs, it’s created maybe 200 or so.  You also don’t have to be a shrewd mathematician to figure out that a man with total net worth of $3.5bn (just over £2bn) would be unlikely to have a billion in his back pocket, especially if he’s a property tycoon.  Figures between £20m-£30m have been thrown around and again I’d defer to Andy Wightman, who reports that analysis of the accounts would suggest that up to 2011, excluding the land purchase itself and all the money they’ve lost, the investment was around £13.5m.   Just two weeks ago, The Scotsman still referred to his “£750m development” but who knows what that even means.  Nonetheless, the abysmal Apprentice aficionado announced plans to build a second course last year and in October, an initial planning application was lodged with the council.

The once cosy relationship between Trump and the Scottish Government, whose role in all this was highly dubious, was increasingly turning sour.  In an incredible dose of own medicine, Trump has been spending most of his time recently accusing Alex Salmond of…you guessed it…INTERVENING in the planning process,, to approve a wind farm development within sight of his precious golf course.  I don’t know enough about the development to comment on its relative merits but it takes some cheek for Trump to play “concerned local resident.”  Having destroyed an area of Special Scientific Interest and failed to invest even a fraction of what he promised, does he really get to have any say over Energy Policy or pretend he has even the tiniest concern for the community in which he operates?

Artists impression of the B(r)each of Human Rights

Things came to a conclusion on Tuesday, when his claims that the Scottish Government had “breached his human rights” by approving the wind farm project were thrown out.  He announced that he would no longer be building his second course at Menie and would instead being investing in Ireland.  Not content with that he declared,

Wind Farms are a disaster for Scotland, like Pan-Am 103.

Comparing a turbine to the Lockerbie disaster in which 270 people died and then running away is about as inauspicious an end as is fitting for our dastardly dickhead.

In the end, the tale of our toupéd tadger is a cautionary one.  We shouldn’t ever have reached the point where someone like Trump thought they had this kind of power in Scotland, we should never have allowed our politicians to give Trump this much power.  While Jack McConnell was undoubtedly the fluffer, it was Swinney, Salmond et. al who delivered the wanker to the bank.  It was a parable we should have needed to have been taught, “never trust an evil bastard waving money he doesn’t even have around and telling us to get rid of all the poor people.”

No amount of engineered bunfight between Salmond & Trump can distract from the fact that fundamentally, the Government were prepared to bend the rules to facilitate this man’s bullying and destruction, based on promises that were always provably lies.  If this is allowed to happen in such glaring public view, what can we expect behind closed doors?

Bezzies: But it wasn’t to be

The fact Trump’s gone to Ireland should be another lesson.  In Ireland, this phenomenon is called fucking off to Poland.  In Poland, it’s called fucking off to Romania.  The egomaniac exploitation experts like Trump remind us that there are always people even more desperate to get screwed over than us, always planning laws more relaxed in some other corner of the world, always politicians in need of something to call “investment” and “regeneration” or just the odd photo opportunity – we simply can’t allow that to the basis of policy making in Scotland.  I’m mindful that the bosses of BP and RBS interjected in the independence debate recently, to say that they too might fuck off, if we go our own way.  That just leaves poor Scotland with sand dunes, wind farms, all our money and loads of oil.  A grim prospect indeed…

Back at the nineteenth hole, I’ll leave you with one final pearl of wisdom from our trolling Trumpetter.  When asked for his views on gay people getting married, he likened it to a world in which golfers used really long putters. Really. Long. Putters.  Do you want to live in a world like that?  Are you scared yet?

I sincerely hope Trump is for once true to his word and that he never comes back to Scotland.  If he does though, we shall greet him with our really, really long putters held proudly and probably slightly threateningly aloft.  But for now, it’s cheerio to the chump that is Trump.

What about Brian Souter?