Let’s just get to the point – Bill Walker MSP is a really nasty piece of work and this week has set that in stone for the world to see. Accused by his three ex-wives and step-daughter of a host of grossly violent assaults over a period of twenty-eight years, this week saw Walker found guilty as charged, vindicating (I’m sure) these women who he abused, demeaned and treated in the most shocking manner.  He’s maintained his innocence the entire time (of course) and made sure to thank his current wife for her support in his post-conviction statement (of course). Here at A Thousand Flowers we are appalled by not only the abhorrent crimes of which Walker has been found guilty, but also his brazen disregard for the seriousness of those crimes.

All in all, he’s well and truly in the realm of Weekly Wanker, to say the very least. (NB: A pertinent moment to remind ourselves that this is also the man who in his vocal opposition to gay marriage, has compared gay-rights campaigners to Nazis – a statement which doesn’t for one minute merit any analysis).

Like all Western politics, the Scottish political landscape is no stranger to misogyny and sexism. From a certain perma-tanned swinger, Frank McAveety’s “choice” comments DURING A PARLIAMENT COMMITTEE MEETING about a teenage intern, and lest we ever forget, Bill Aitken’s jaw-droppingly ignorant response to a women being gang raped in Glasgow, the male dominated world of Holyrood is (entirely unsurprisingly) no exception to patriarchal, sexist bullshit. Having worked there myself for a good two and a half years I can confirm first hand that Holyrood is absolutely a place where sexism is present and a lot of dangerous gender-talk goes entirely unchecked, albeit largely behind the scenes. Working there destroyed my mental health and I can say with absolute certainty that this culture impacted on that.

But Bill Walker is a whole other story.

It is clear that he led systematic hateful campaigns against each of his ex-wives. Alongside what appears to have been constant demeaning, controlling and emotionally abusive behaviour, he was stunningly violent, resulting in this conviction for twenty-three individual accounts of assault. This includes punching one of his ex-wives square in the face on the run up to their wedding day, threatening another with an air rifle, and on another occasion – repeatedly smashing a saucepan over the head of his step-daughter. It is beyond shocking to read the catalogue of horrors that he subjected his partners to, and I can’t even begin conceive of what life must have been like under his terror. I imagine that this conviction, whilst undoubtedly a victory, will only go so far in beginning to repair the damage and trauma that he has inflicted on the women he was supposed to love and care for.

Yet Walker doesn’t give one shit. Flat out and unrelenting denial has been his rhetoric, with some classic gender stereotyping thrown in for good measure – see calling all his ex wives “mad” and claiming that the allegations were routed in their being “miffed” about him winning his parliamentary seat. Aye Bill, because all three of your ex-wives are so jealous of your wee “thinking pod” and the members restaurant (which is quite shit btw) at Holyrood that they decided to club together to reveal to the nation and then a court of law the most intimate details of their married lives with you and the disgusting and humiliating abuse you subjected them to. Right then. Innocent until proven guilty of course, but even yesterday in the wake of his conviction Walker showed no remorse. Instead, his statement from his solicitor stated that he is “disappointed”, thanked his “supporters” and advised that he will be taking some time to “consider” the verdicts.

Bill Walker – loves Jesus, not so much women (or homosexuals)

Salmond has been very quick to condemn Walker, and rightly so. Walker was barely out of the dock yesterday and Big Eck was all over the press to stress his outrage and insist that he resign as an MSP, having already booted him out of the SNP camp last March when the allegations came to light in the Sunday Herald. At that point Walker hadn’t even done a year as an MSP and the SNP were seen to move fast to make sure that they were seen to be doing the right thing by giving him the heave-ho.

Yet, on closer inspection – the SNP actually have a fair bit to answer for when it comes to Bill Walker. They themselves have confirmed that they knew full well about Walker’s violent and abusive behaviour, well before he even made it on to the 2011 candidate list. In true MSP tradition, Walker was first an SNP Councillor in Dunfermline before moving up the ranks to MSP, and in February 2008 the SNP were approached by the brother-in-law of one of his ex-wives who made Walker’s unacceptably abusive behaviour very very clear. Not only did he provide the SNP with information about instances of violence (some in newspaper article form) but he also gave them affidavits provided by his sister-in-law and her daughter, as well as a court judgement with a penal notice attached which threatened Walker with prison if he exerted violence towards a named child. Yet the SNP claim at that in candidate assessment, they couldn’t find anything “in law” to suggest that this was the case. Um…….right. So he wasn’t convicted, no, but it had been made more than obvious to them that Walker was a violent, or at least extremely questionable, individual. Yet he was still allowed to proceed as a candidate for public office in what the SNP knew would be a landslide election in their favour. Why? 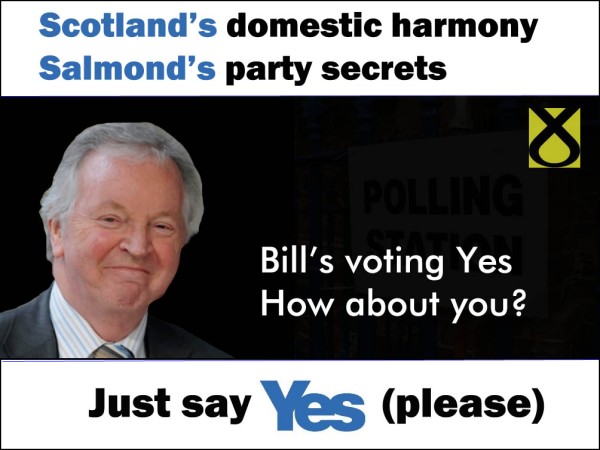 Almost enough to make me vote No.

Being an MSP, or someone who aspires to be an MSP doesn’t make you any more unlikely to be an abusive man. It is important that the narrative around Bill Walker’s case is not allowed to fall into that “they just don’t seem the type” trap. There is no “type” of man who abuses yet that is a myth perpetuated with such voracity that it continues to significantly hinder the fight against domestic abuse. We must remember that lawyer, bin man, doctor, baker can all be abusive. Yet, at the same time – we cannot ignore that fact that in being an MSP, Bill Walker holds a very publicly responsible role, one which he absolutely cannot be allowed to maintain in the face of being convicted of such sustained violent and manipulative abuse.

We expect a lot of our politicians. Elected representation is one of the highest accolades which can be bestowed on an individual by communities. In turn, we expect those to whom we give this responsibility to display behaviours and values which are broadly perceived as morally upstanding. I’m a jaded cynic but I still think this is a worthy aspiration. Representing your community and being party to decisions which have very real implications for the daily lives of citizens is a deep responsibility and whilst no human being is perfect, it is entirely reasonable to expect that these are positions to be filled by individuals of integrity, honesty and at least a degree of kindness.

Bill Walker is none of these things. Bill Walker is a violent, morally reprehensible thug with an ingrained hate of women. His unreserved contempt for the grievances of those he abused and his complete lack of remorse towards those he is supposed to serve and represent do nothing but demonstrate his utter arrogance and vile character. Walker will be sentenced on the 20th September. If he receives a custodial sentence of over a year he will automatically be suspended as an MSP, anything shorter than that and the decision lies with him. There is no shred of doubt that he must resign immediately – there is no place in a modern progressive Scotland for the tolerance of gendered violence, least of all in those who we invest our trust in to make our most important decisions. Bill Walker is an abhorrent individual who had committed unforgivable crimes – we must not rest until he is banished entirely from public office.