The rapid global expansion of takeaway delivery firm Deliveroo – launched by a former banker in London just three years ago – saw it unveil another £212m in investment last week. Takeaways are big business, with app and online based ordering magnifying growth in the sector, expected to be worth £8bn a year by 2020.

But when in comes down to it, what actually is Deliveroo? When you take out the drivers and cyclists who deliver the food, the answer is very little – a couple of offices and some lines of computer code. A smart-looking website and a long list of takeaways are of little value if there’s no-one there to deliver the goods.

So you would think – given the company’s reliance on the willingness of its drivers to cycle about delivering gourmet burgers to the desks of City workers – that Deliveroo might value its workforce and treat them with something nearing respect. But that’s not how things work in the gig economy, which is predicated on low wages and quasi-legal evasion of employment rights.

The imposition of a new contract for Deliveroo drivers in London (which would scrap a £7 per hour pay rate, topped up by £1 per delivery, and replace it with a flat rate of £3.75 per delivery) has sparked wildcat strike action over the past three days. Hundreds of drivers have been gathering outside the company’s headquarters to demand a living wage and refusing to carry out deliveries. Last night, dozens shouted down a company boss who came out on to the street to insist that they were willing to negotiate “individually” with the workers. Quite rightly, the drivers and riders were having none of it:

A Thousand Flowers has been passed a copy of the contract given to Deliveroo cyclists. In Scotland, the current rate of pay is £6 an hour with a top-up of £1 per delivery. To meet the National Living Wage of £7.20, riders would need to complete at least two deliveries per hour. It is unclear when the new piece-rate is being rolled out in Scotland nor what this will be set at, although it is likely to be lower than London.

Deliveroo makes clear in the contract that it is exempt from employee rights legislation, as the firm considers its workers to be self-employed contractors, with no entitlement to sick pay, maternity leave, paid holiday or other legal protections. Despite this alleged self-employment, the drivers are compelled to wear a uniform and abide by a lengthy code of conduct. Worse still, they need to pay for the uniform and other working equipment themselves, stumping up £150 for  clothing, the delivery box and “branded stickers”.

If drivers don’t pay this upfront, it’s deducted from their pay. The driver that ATF spoke to confirmed they had never been supplied with a helmet or lights as promised. Workers should, in theory, be repaid this if they formally end their contract and return the items in a “good state of repair”, at the “sole discretion” of Deliveroo.

If any worker wants to dispute the “self-employed” contract and argue that they are an employee or worker for Deliveroo, they are liable for paying the company’s legal costs in any resulting employment tribunal. This farcical set-up effectively insures Deliveroo against any legal dispute with their workforce:

Companies like Deliveroo are reliant on a huge pool of compliant labour – a reserve army so desperate for work that they will sign up to whatever shitty conditions are thrown at them. All workers deserve the basic protections provided by employment law, and no amount of clever, legal duplicity should be able to deny them that. With the company worsening an already bad situation and imposing a new contract, something had to give, and London workers walked out.

Facing days of disruption to their deliveries and, perhaps more crucially, vast reputational damage as media interest in the dispute mounts, Deliveroo responded in the only way that hipster tech start-up innovation wankers know: they sent some prick on a fucking penny farthing out with a Deliveroo bag in central London. 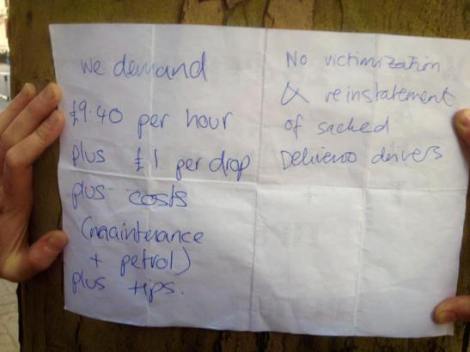 Revealed: Panicking G1 Bosses Try to Silence Their Own Staff