Unless you’ve gouged your brains out already, chances are you’ll be familiar with Daryush Valizadeh AKA “Roosh V” – more specifically, his now cancelled plans to hold gatherings of his followers at locations worldwide this weekend, including Glasgow and Edinburgh.

For anyone lucky enough to not know, he’s a brazen self-publicist and the self-appointed figurehead of a movement which actively promotes hatred of women and rape culture, with a side order of every other kind of bigotry imaginable. His books on how to be a “pick up artist” are little more than tactical manuals for the grooming, intoxicating, sexual assault and rape of women. His various online projects (no, you’re not getting links) attempt to create a safe haven for men to be dangerous misogynist arseholes in relative anonymity.

It’s little wonder his attempts to bring this online bilefest “out from the shadows” by hosting meetings has provoked an intense and furious reaction across Scotland (and other countries) –  petitions, demos and calls to change the law to ensure hate speech against women carries the same penalties as it does against other groups. There have been statements by police, by politicians, by quite literally everyone and anyone, expressing condemnation towards Roosh V.

This has led to more than a hint of…”aren’t we giving someone like this exactly what he wants by plastering his rancid coupon everywhere?”

But “Roosh V” is already here, he’s already managed to make a discussion happen. If society had meekly tolerated this, we’d have a lot more to worry about than whether one troll gets fed or doesn’t. Feminists the world over have been asking ourselves for some time “Really? Where is the line? At what point do people in the general population decide ‘enough is enough, women shouldn’t be treated like this, stop it’?”

The line clearly isn’t drawn anywhere near providing a justice system where rape victims and domestic violence victims are given the full resources of a well-trained police force in protecting them and apprehending their attackers. And refuges and rape crisis services? Nope – I guess we don’t need those any more – or if we do, the Tory government isn’t going to fund them.

Well, looks like we finally found a line, and for that, I guess we should be grateful. I guess the line is advocating legalising rape on private property (and yes, he now claims that point was a “satirical thought experiment” – just joking lads! – but it was also widely publicised and seemed to be the catalyst that tipped everyone over into action).

Finally: an act of sexism that brings *all* the boys to the yard in solidarity with feminists. I never thought I’d see the day when a local fascist mob (of 5 people), known as the Scottish Defence League (SDL), were on the same page as the Glasgow Anti-Fascist Alliance (100s of ‘em), and wanted to turn up at the same event, not to beat the shit out of each other as is usual, but to beat the shit out of Roosh V’s fanboys. Although I suspect the SDL’s designation of Roosh V as a “beast” may have also involved a degree of “protecting our white women against a man of indeterminate-but-definitely-probably-not-white ethnicity”, so please don’t think I have become an admirer.

Also on that page was lefty liberal feminist leader of Plaid Cymru, Leanne Wood, who publicly lauded all-female boxing club, The Toronto Newsgirls, for stating they would beat the shit out of Roosh V’s supporters if they showed up in Toronto. How great to see our normally anodyne leaders advocating violence against .. was going to say rape apologists .. but in this case, rape advocates. No, I actually mean that. It’s about time a line was drawn. Pastor Niemöller and all that. 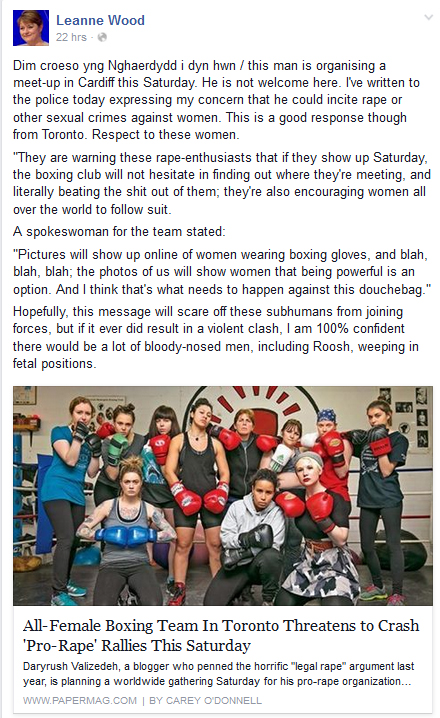 Yes, since Roosh V first made the call, there have been all sorts of outpourings and potentially unsafe actions mooted against him and his supporters. It’s important to recognise that the scale of the reaction says *something* positive about the underlying desire to challenge these attitudes before we rush to the usual hipster condemnation of anything vaguely spontaneous, because we’ve decided we’ve got better tactics than people who’re actually fucking furious.

I am glad to know that there are men, and politicians of any gender, who are willing to step up on this issue – but I also think Roosh V would have been lucky to get 3 genuine attendees in Glasgow. He couldn’t find a single punter in the city prepared to donate…an email address to the cause. But we all need to be honest about the scale of the problem.

It’s a different story when women call out male abusers in their own circles, accuse men who are known and liked. Cf: Tommy Sheridan, still being lauded in some circles. The SWP and their comfy sofa for rapists – still sitting outside Hillhead Underground or handing people banners on marches and not being scraped off the face of the UK. The fact no-one on “the new left” has ever asked why many of the dangerous men who wrecked “the old left” are still fucking here.

Round and round we go

I find it hard to believe, given the examples above and many many more, countless more, that the SDL or indeed GAFA, or RISE, or any of our other political groupings dominated by men, would genuinely react with this vociferousness if members in good standing within their ranks are called out by victims.

All this outrage, this sound and fury, petitioning and poorly conceived “demos”, it all means very little, because it locates the problem “over there” with that particular bad man. Yes, that bad man is scary and yes it is possible that his advocacy and writing are training up an international cadre of rapists with more skills and knowledge around how to do it and how to get away with it. Encouraging doxxing and harassment of women (“unattractive women and their enablers” as their blog so helpfully puts it) are also their methods, and these things are traumatising and dangerous too.

If Roosh V didn’t exist, someone else would be doing what he’s doing and we’d all be talking about it because he taps into the pool of rubbish men who’re all around us, the ones we see groping women at clubs, the ones we have our lunch with who tell us all about their weekend of burds, the ones we never bother to challenge, the ones with so much power in political movements – some of them will then go home and post endless abuse about how Roosh V’s gonnae get pure Smeatoed if he sets foot in Scotland.

I’m not saying people shouldn’t be threatening to beat the crap out of these terrible people in order to discourage them in future. But let’s not kid ourselves that the line of consensus on outrage and condemnation being so far on a distant horizon is anything other than profoundly disturbing, while doing nothing to address the rump of dangers faced by women, gender-non-conforming people, and the men who support us the world over.

Whether the misogynists “come out from the shadows” or not, they are already here.

The Rise of the Meninist

“This is a tax demo, why don’t you go back to your rape demo?”