On the 48th anniversary of the Abortion Act 1967 becoming law, members of the Society for the Protection of Unborn Children (SPUC) held their annual anti-abortion vigil in Glasgow’s George Square.

The timing this year had a particular significance, since it’s just been announced that abortion law is to be devolved to Holyrood.  Leading the charge to restrict abortions is ATF’s favourite roaster, John Mason.  Mason tabled a motion in Parliament which,”“recognises what it considers the fundamental rights of babies to be protected both before and after birth as well as the importance of women’s sexual and reproductive rights, and commits to achieving a proper balance between these respective rights.”  For those not fluent in John Mason, that means “I want to drag us back to the dark ages.”

And out of this darkness came SPUC, rolling up at about 6ish with their car, pasting table, banner of the Virgin Mary and a seemingly endless supply of candles. 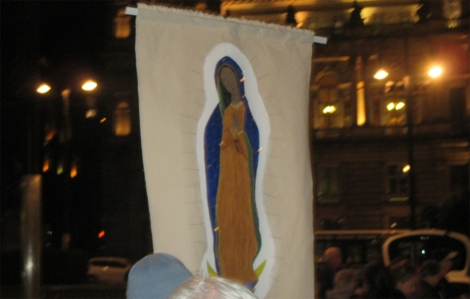 Thankfully, they were soon greeted by a vociferous group of pro-choice demonstrators, who managed to shield the SPUCers from sight by surrounding the vigil for the next hour or so.

Considering the strength of feeling, it was an entirely peaceful affair, setting aside the inherent violence of men telling women they can’t control their own bodies, which by the way, we shouldn’t.

After about 90 minutes of hymns, chanting, singing and a rather boring back and forth in which the same man shouting “murderers” was greeted with the same few women shouting “hypocrite”, the SPUC demo slowly marched off. 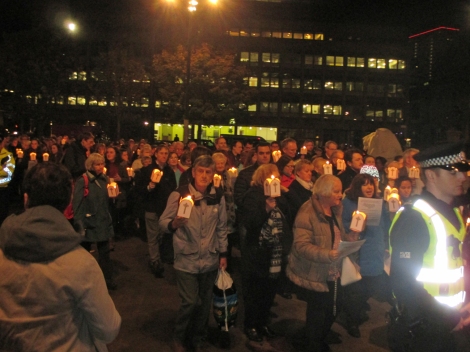 Attempt at a hands across the water moment of the evening goes to the SPUC dude who came up to ask if anyone had lost a credit card.  Before I even saw it, I knew it would be mine.  He handed me my card back, I thanked him and he gave me a “love the sinner, hate the sin” pat on the back and a knowing look, so thanks pal but still fuck you.

The vigil moved off towards the Cathedral….only to again be greeted by pro-choice demonstrators.

As the march approached, the counter demo chanted “Not the Church, not the state, women must control their fate” and led a rousing rendition of “Misogynists, misogynists, your candles shine so brightly” to the tune of Oh Christmas Tree.

With the SPUCers and the Sacred Relic of our Lady of Guadalupe now safely in the Cathedral, the demonstrators faded off into the night/went to the pub.

I couldn’t help but notice the sharp demographic differences tonight, on the pro-choice side there was a younger vibe and the demonstrators were almost entirely woman, on the SPUC side we had small weans and their grandparents with an abundance of angry, reddish faced men. In other words, we had the people who would have to deal with the consequences of having their rights snatched away vs. people who didn’t look like they’ll be doing much procreating any time soon. 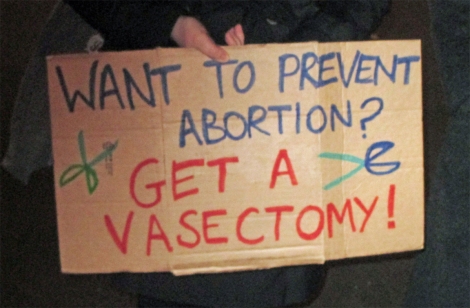 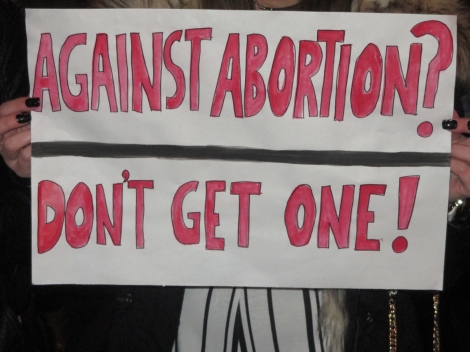