The story of this election is so utterly obvious that we’ve spent precious little time recounting it.  If you’ve been living under a rock: Labour are still shite and everyone loves the Nats, like a lot.   All efforts by the media to suggest that Alex Salmond will eat your hamster or that Nicola Sturgeon is unfit for office on account of her having a posh coffee machine seem to be having broadly the same effect they had during the referendum, making rational humans feel duty bound to defend the SNP, for no other reason than to balance out the incomprehensible nonsense being fired in their direction.

I’m not a big fan of elections from a political point of view (mainly because they‘re usually rather lacking in politics). I see them as more like wrestling; to be enjoyed and understood you need to suspend your disbelief and become uselessly attached to someone shouting and attempting to land piss poor blows on their kiddie-on-rivals, while  the real benefactors hide far from view.

Cleggmania-4-life: Elections usually bring out all the action figures & the macho men.

The story told and sold still matters though because it shapes our confidence to challenge things on the ground, it changes the way we see “ourselves,” however miserably unchanging things may actually be. Even if we all knew Obama was pure itching to start droning Pakistan and we’re all fully aware that the SNP remain unlikely to call for all out class war, we still end up cheering for the “good guy.”  And did we mention, it’s not a guy anymore?!?!

I can’t underestimate how much that matters, when our plucky underdogs, Nicola Sturgeon, Leanne Wood & Natalie Bennett wiped the floor with the titanic defenders of the male, pale, stale politics which has plagued us for far too long.   It’s not just symbolism or tokenism, it ferments a change in engagement , it brings politics to people who the political class don’t want anywhere near it.

Keen to keep up with the latest instalment of the thrilling battle, I tuned in on Thursday night to cheer on the new golden trio of politics.  It was all going down as expected, the leader of a nationalist movement started talking about wanting to get rid of, “people with no right to be here,” calling for “strong controls” on immigration and declined to give a straight answer as to whether there were too many immigrants in the country.  Nigel…fucking…no wait, that was Nicola Sturgeon.

A few short weeks ago, there was a righteous furore amongst members of the online community supportive of the SNP over the Labour party’s decision to produce a mug, celebrating the party’s pledge for “controls on immigration.”   So why is to OK for the SNP to make repeatedly calls for “strong controls” on immigration while suggesting Labour were pandering to the right with their #racistmug?

There are many battles being fought at once, including one much closer to home for Nicola Sturgeon, the most prominent person in this election who isn’t actually standing.  The Glasgow Southside MSP came to the fore for more than a moment last Thursday, as Sturgeon rightly pointing out that lack of investment, poor housing and inequality are what damages social cohesion…before boiling everything down to the GDP value which could be extracted from immigrants by the state (in this case, presumably, the British state), “what benefits our economy? That’s what should drive our policy on immigration.”

Less than an hour before when discussing austerity, economic policy was not an end in itself but when there are crucial constituencies to be swung we now only seem to welcome people with hunners of money to our shores.

While the overwhelming and compelling economic case for allowing freedom of movement must be made and rarely is, there’s an increasing drive to divide immigrants in much the same way as the media and political class seeks to divide the unemployed and those forced into poverty; the story being told is of good immigrants vs bad immigrants.  Look at this fire fighter, look at this teacher – but turn a blind eye to the thousands who will drown at sea this year because they might need a bit more support before they’re able to be the ones rescuing people from burning buildings.

It was left to Leanne Wood to lay the smackdown on the whole issue, by calling for the repeal of Thatcherite anti-trade union laws to help create a society which can resist very really pressures on services,  housing, wages and jobs.   That’s a knock out blow always absent from the SNP repertoire.

It can be dangerous to define immigration solely in terms of economic benefit but that doesn’t mean we underestimate the importance of economics in understanding why it occurs.   One solution is to stop anyone coming to your country by turning it into a shitehole,  the Tories may yet achieve their dream of driving immigration down to “tens of thousands” annually by forcing millions into poverty and destitution.  Another is to create an economy and a society in which people can participate and which works in our collective interest, even if that means a few more people chosing to stay here, rather than leave.

I have no interest in over playing a few words, the overwhelming majority of what Nicola Sturgeon said about immigration was as good as you’re going to get from a mainstream politician.   There’s just something uncomfortable about watching a nationalist leader discussing the need to rid of, “people with no right to be here.”  Especially when the rights of said people remain defined by the British state – a state which will, at best, be ruled by a Labour party toasting their sort-of-victory with their racist mugs.  This may only be a whiff of a change in approach from the SNP leadership towards immigration but it’s a pretty stinking one. 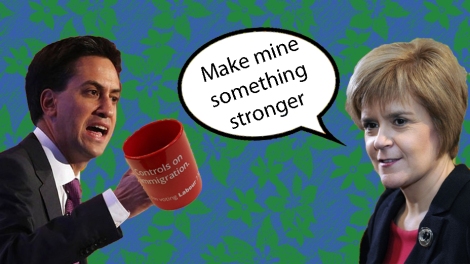 The most fascinating interactions last Thursday were between Miliband & Sturgeon, which generally involved Ed looking like he should have stayed at home with his other two amigos.  But what Sturgeon had to say about immigration seemed like a carrot to Labour –  the SNP won’t do anything to challenge policies which see people ripped from their communities and the widespread detention and deportation of those who we should be proud to call our fellow citizens, often back to places where they simply aren’t safe.   That means the policies which many people, including SNP members and politicians, have opposed are here to say, it means people we fought to keep here will continue to be snatched away by the British state, that’s simply not acceptable.

There’s going to be a massive battle over whether the SNP seeks to shake up the British establishment or embed within it.  If the intention of some is to create a Westminster Branch Office prepared to drink from the Labour cup on immigration or any issue, they could find themselves playing a mug’s game.

The influx and the exodus: Is everyone coming to/leaving Scotland in 2014

One response to “A Mug’s Game: Immigration, Labour and the SNP”