Welcome to January 2014, the month when doubtless hunners of billions of Bulgarians and Romanians take part in a mass dash to our shores.  Despite the total population of both countries being around 29 million, some very reliable sources (UKIP) have guesstimated that around 4 million people are definitely coming to the UK THIS YEAR ALONE, 14% of the population of both countries. Presumably the other 86% will arrive over time, completely bypassing all the much closer, hotter countries and leaving the entire Western side of the Black Sea coast completely uninhabited. Over at A Thousand Flowers Towers, our crack team of analysts have been using a calculator to discover that Scotland’s share in this bonanza would be 336,000 folk in 2014 alone.  WOOP! WOOP!

Underneath the overblown predictions, there is an ever increasing current of nastiness, in particular anti-Roma racism.  The narrative about “Eastern Europeans” has been doing the media rounds for some time but the intensity of the anti-Roma sentiment has accelerated in anticipation of the non-existent influx of new EU migrants.  A press which attempts to incite racial hatred before the fact (especially when that “fact” is a mixture of conjecture and fairytale) must be challenged and resisted.

One particular fairytale proved a big hit last year, when Greek and Irish police abducted two children and splashed pictures of them looking very, erm, blond, all over the papers.  The far-right had a field day as the old “Gypsies steal children” tale was everywhere.  When it turned out both children were actually Romani, one was informally adopted while another was just knicked from her family for no reason, the press lost interest. “Racist police steal children” wasn’t a great Daily Mail or Express headline, even though it was true. 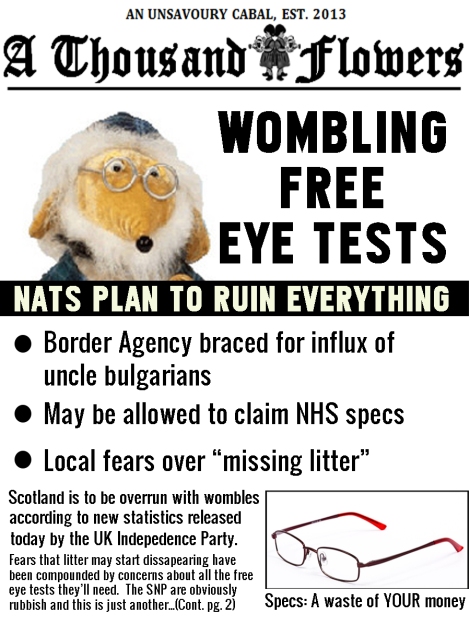 The collapse of the British National Party and the English Defence League has left a clear run for UKIP to exploit fear and racism for political gain.  While they’ve been hounded off Scotland’s streets and have failed to make any headway at the polls here, we have to be on guard, especially with Euro elections on the horizon.  It’s also true that what’s good for the goose-stepper could be good for any of the other racist ganders – the EDL have engineered resurgences before when events have transpired which they could exploit.

It would be incredibly arrogant to write this off as England’s problem and ignore what may be brewing on our own doorstep.  There are more than murmurings from Govanhill of increasing hostility towards Roma who’ve settled there.  It’s not going to be enough to just shout “racist” at people when unemployment and underinvestment are real concerns, when we have no coherent housing policy and when politicians frankly don’t care for any of the residents or their concerns, be they native born Scots or more recent arrivals.

Dealing with these issues demands long term solutions we just won’t get from a Westminster system obsessed with austerity and subsidising a house price bubble.  I’d also argue that remaining part of a political system which allows Nigel Farage’s coupon to grace our screens so much does nothing for community relations nor does remaining part of a state which openly exploits racism for its own ends. The Tories have been banging the anti-immigrant drum, whether it’s increasing racial profiling, stop and search at public transport hubs or the disgusting campaign labelled “racist van.”  Across the chamber, we have Labour, apologising for getting it wrong on immigration (i.e. not being racist enough). 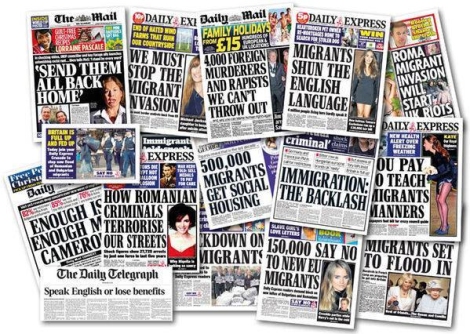 Scotland isn’t “full up”, it’s practically empty, a man-made desert where many former population centres have been transformed into playgrounds for the rich.  Land reform as well as reform of the immigration system must be high on the agenda for any Scottish government. While it’s important to point out that hundreds of thousands of immigrants are not planning to come here, we should also question whether it wouldn’t be a positive thing for Scotland if they did.  Not least because 2014 is also the year of a mass exodus from Scotland.

Apparently when us dastardly Scots vote for independence, 640,000 people will up sticks and leave, according to a very scientific poll conducted by…the Express. The most notable potential emigrant is bra tycoon Michelle Mone, who declared she would take her business elsewhere. This will doubtless be bad news for Scottish manufacturing.  A Daily Record investigation back in 2004 alleged the great patriot paid her Chinese workforce £33 a month for a 6 day week.  That hasn’t stopped Mone ranting about how much she hates having to employ anyone in Scotland and she recently hit out at the excessive use of employment tribunals.  We’re sure her outburst was in no way connected to the tribunal brought by a former employee of hers.

I can’t say I’ll be shedding a tear for Michelle or any other evil bastard who wants to leave Scotland, before or after independence.  If anything, it makes an even stronger case for building the kind of country that attracts some new talent; in Daily Express world, we still need about 300,000 new citizens to break even this year. Maybe we could look to the North of England for some “benefit tourists” who we’re always assured will descend on us in the hope of a free bus pass or a free prescription.

At least there will be plenty of room for Mone and her cronies on the soon to be deserted Black Sea coast.  Perhaps she can set up a greasy spoon to serve all the miserable Daily Express readers of Bourgas, who’ve had to leave the multicultural tartan hellhole that Scotland will obviously be by this time next year. 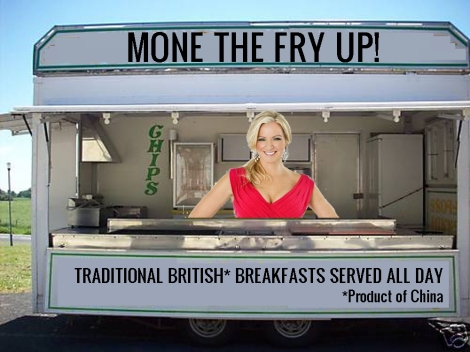 What both the influx and the exodus myths have in common is fear – fear of the future, fear of the unknown, fear of someone or something new or different.  They’re both obviously pish but why are we even expected to be scared by the fact that some people might leave and some other people might come instead?  I think Scotland could deal with that, even if it’s never actually going to happen.

We’d frankly be delighted to have some new arrivals to make up for the few cretins who might decide to leave Scotland in the hope of being able to more easily exploit people elsewhere when we gain independence. We’d rather have thriving Eastern European and Roma communities in Scotland than Michelle Mone moping about.

Britain’s Race to the Bottom

One response to “The influx and the exodus: Is everyone coming to/leaving Scotland in 2014?”