This week’s local elections in England & Wales have again focused attention on the perennial boil on the arse of Britain that is UKIP.  Taking an average of 26% of the vote in the seats they contested and picking up 147 councillors, many are hailing this result as the start of a move towards a 4 party system.  UKIP leader, Nigel Farage, put the result down to the huge disconnect between the political class at Westminster and ordinary people and he is probably correct.  Many of the wifies who’ve been gracing our screens from the streets of  English towns have talked about wanting something different, the need for change and most importantly of wanting to stick it to the smug politicians who take them for granted.  In many ways, it’s hard not to share these sentiments.  I formerly tended to think of UKIP as “a bunch of cranks who’ve had too much media coverage,” to quote an excellent piece arguing why that’s not the case.  It would also be wrong to be hyperbolic about their fascist character, although the far right are certainly quite at home in UKIP and see it as a mainstream vehicle to peddle racism and specifically Islamophobia. They are certainly not just about smoking in pubs and cosy protectionism either.

The desire for protectionist time-travel back to a fairytale of green and pleasant lands does strike a chord in a divided England.  Back to the days when Britain was Britain and it had power.  But their tardis tricks have no currency at all in Scotland and their rise down South is further proof of the increasing divide between Scottish & UK voting patterns.   Given their ability to take votes from Labour, it would not be inconceivable that we could be faced with a coalition of an entirely more Blue and Purple variety if we reject independence in 2014. UK(IP) OK may not be far off if some commentators are to be believed. But it’s also entirely possible that UKIP will just disappear when it comes to electing a government.  Their vote went from 16.5% in the Euro elections in 2009 to just 3.1% a year later in the General Elections.  Electing councillors who can’t be closely monitored by the leadership may not be a smart move either. People may change their minds given the time to assess just who it is they have given power to. So on that note, it’s time to set aside the tedious political chat which has dominated the media all week and move on to what we do best; calling people wankers. 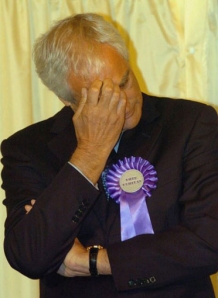 Even Kilroy gave up on himself eventuallly

Imagine the task of picking a single individual from a party like UKIP.  Where to start? Remember Robert Kilroy Silk? A former Labour MP who went on to bully people on a chat show before returning to political life as a Kipper.  Amongst his gems were calling Irish people “priests, peasants and pixies” and launching a racist anti-Arab tirade in 2004 which isn‘t even worth repeating.  After the suntanned warrior tried and failed to take control  of the  party, he quit and formed his own shitty party with exactly the same policies but with him in charge. He managed to not even be able to be leader of a party specifically set up for this purpose and resigned in 2009 saying, “we tried and failed.”  Yes you did.

But where Kilroy failed, others sadly succeeded such as Godfrey Bloom.  In 2004, the MEP declared he wanted to focus his attention on “women’s issues” before adding “because I just don’t think they clean behind the fridge enough.”  He used his position on the European Parliament’s committee for womens rights to declare, “I am here to represent Yorkshire women, who always have dinner on the table when you get home.” When questioned on the morality of going to Hong Kong to engage in sex with prostitutes he replied, “in short, most girls do it because they want to.”  When he’s not being a misogynist he’s mostly just being a drunk; having had to be carried out of the Parliament on one occasion while incoherently frothing against MEPs from Poland, Latvia and the Czech Republic.  He also once interrupted a debate to ask a question about the Cambridge Womens Rugby Team.  He later blamed the outburst on “very heavy” pain-killers.  Of course, we were all very drunk at the time.

Tom wasn’t wise enough to not get caught

Fellow MEP Tom Wise no longer graces the benches of Brussels having admitted to embezzlement of EU funds (you know, that gravy train they are so against).  Wise denied and contested the charges at first but confessed to his guilt just before UKIP Leader, Nigel Farage was due to give evidence against him in court.  In sentencing him to two years in jail the judge concluded,

It is no exaggeration to say that you had hardly got your feet beneath your desk as an MEP before you were planning to defraud the parliament to which you were elected and the people you were elected to serve. This was very deliberate and blatant dishonesty. You did not fall into this offence as a result of some unfortunate combination of unforeseen circumstances which happened to suddenly present you with temptation. You knew the system of expenses inside out and this was a claim you devised and planned with some care.

The public exposure of UKIP pricks (there‘s a tongue twister for you) increased significantly in the run up to the local elections. Anna-Marie Crampton is one potential inductee after she recently blamed the holocaust on a Jewish conspiracy in a rant online.  Her believable excuse was that her account was hacked and the comments posted as part of an anti-UKIP conspiracy.   As if to prove the party were equal opportunity haters, another local zero, Tony Nixon launched anti-Muslim rants and went on to give gushing praise to the fascist thugs of the EDL saying, “Its work has greatly helped the rise of Ukip.”  As if to enforce how definitely not racist the party are he talked about wanting to destroy mosques, burn Muslims and posted pictures of the Obamas mocked up as chimps. Candidate Susan Bowen was also expelled last week after her former membership of the BNP became public knowledge.

But all the aforementioned wankers have one thing in common.  They’re all English.  So since we’re a Scottish blog perhaps this week’s inductee should themselves be a Scot.  Now despite having had zero success in Scotland, there are perhaps surprisingly no shortage of Scottish contenders. 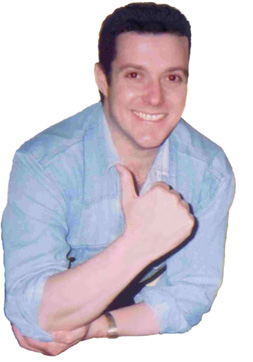 We give Al the thumbs down

A personal favourite of mine is former Scottish organiser , Alistair McConnachie. I’ve looked at this gentleman before vis-à-vis his incredible success in gaining 113 votes in the first ever by-election to the Scottish parliament by arguing that the parliament should be abolished.  He was later removed from UKIP after expressing sympathy with the views of holocaust denier, David Irving.  Imagine my horror when I moved to Glasgow to discover McConnachie had refashioned himself as an environmentalist .  He gained 1300 votes in the Kelvin Constituency, a stunning result for an independent candidate, in the 2003 Scottish Parliament elections by standing under the banner “Independent Green Voice.”  What nice liberals who got confused and voted for him didn’t foresee that that his “victory” speech would involve the phrase “pure people, pure land.” We did foresee this so ensured he was drowned out by a chorus of “Nazi scum“ which seemed to take him off guard.  He now  runs a website dedicated exclusively to him talking about why the Union is great.  What a top chap.

In 2005, John Houston, the UKIP candidate for East Kilbride called for “the resurrection of the British empire” led by the “English speaking nations.”  In case anyone was in any doubt he went on to elaborate by suggesting  the creation of separate communities for non-English speakers and for those with facial disfigurements, for those with learning difficulties to be sent to camps and for civil servants to be given free brothel visits as a perk of their job.

Of course it’s not necessary to go back in time to find UKIP wankers in Scotland.  Current Scottish President Christopher Monckton (AKA 3rd Viscount Monckton of Brenchley) is a former advisor to Thatcher and hereditary peer. He doesn’t believe in climate change and once argued that all HIV+ people should be quarantined until they died.  He got pally with former UKIP Leader Baron Pearson as both he and Pearson own vast adjoining swathes of Scotland’s countryside.  Baron Pearson himself deserves a mention for escaping £275,000 in capital gains tax by “flipping” his main residence between his £3.7m mansion and his Scottish estate.  He was exposed during the expenses scandal in 2007.

Why are gay people so selfish that they cannot see the benefit of long-term couples for the many people who are not gay? Why are they so hostile to hetero-sexual couples – that they feel they have to destroy marriage and replace it with McDonald’s plastic-relationships one-size fits everyone ‘marriage’

Continuing on the theme of destruction he scoffed,

I didn’t realise that gay people are actually deeply hostile to heterosexuals. Perhaps that is because of the way they have been treated, but personally, I’ve become less sympathetic to gays, the more they try to destroy our society – the society that gave them the right to be proud of themselves

So with so many potential candidates it’s fair to say I’m stumped.  So since I’m supposed to be on holiday, I will defer to the reader with regards to just who the biggest UKIP wanker is.  There are doubtless just as many I’ve left out as those I’ve included.  The party’s usual response to the worst excesses when they arise has been to expel the individual(s) concerned and hope it will all go away but with 147 newly elected members it’s hard to know whether this can continue.  The motives of individual Kippers are many and varied as we have seen.  Some just want it to be like the good old days while others have distinctly darker aims.  But they can’t all be expelled every time they express what they are really about.  Of course having this sideshow will allow the other Westminster parties to lurch to the right even more on the economy, immigration and maybe even social issues in an attempt to steal UKIP’s thunder.

We shouldn’t have to tolerate the stench of Kippers being carried north of the border inside British papers.  Nor can Scotland tolerate yet another party with no backing here seeking to impose their poisonous agenda. UKIP serve as a reminder that Britain may be only in the beginnings of decline.  It’s not a coincidence that the wankers are in the ascendancy now.  If Nigel Farage gets anywhere near the cockpit, Britain could be crashing fast. 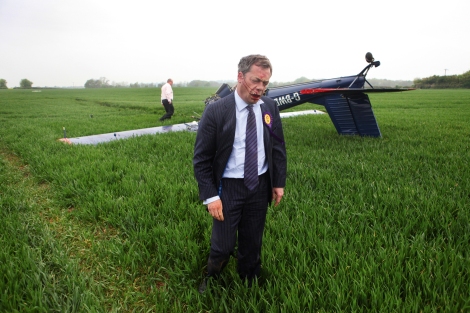 And did those planes, in ancient times, crash upon England mountains green?