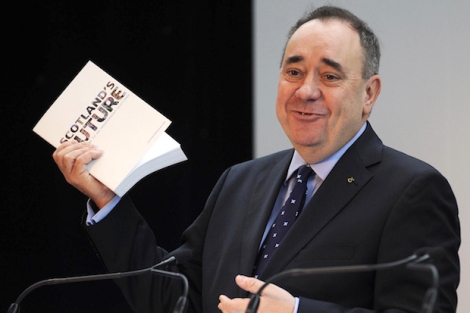 Tuesday’s long awaited White Paper on Independence was an event I was eagerly anticipating. It’s not that I need convinced about independence. I’m not really looking forward to ploughing through 670 pages in order to mark the government on every miniscule detail in red ink like a grumpy, half-cut communist schoolteacher (although that will happen).  It was more the knowledge that all the other people who hadn’t read it would nonetheless proceed to talk unadulterated mince about their eternally unanswered questions.

WILL IT ANSWER EVERY QUESTION?!?!  and if so HOW DARE THEY TELL US EXACTLY WHAT’S GOING TO HAPPEN?!?!

No-one quite knew if the answer to every possible query and/or wonder of the universe would be directly addressed within the document.  Frank McAveety summed up the mild peril best on Twitter.

On Saturday John Mason MSP said the White Paper will not answer all the questions.  Like the old comedy Soap said: “Confused? You will be.

Our politicians clearly weren’t bunking off eating pies. In fact, it’s a wonder they weren’t all on the (Willie) Rennie, given the speed with which they all managed to digest the document. 670 pages?  Easy!  In fact, it wasn’t nearly enough for Margaret Curran, who again wanted ANSWERS.  She tweeted:

White Paper astonishingly thin on detail.  Full of assertion and assumption.  Nothing for people across Scotland who are looking for answers

David Cameron was disappointingly quiet, waiting until Wednesday to mumble something about needing, yep, you guessed it…answers to his “unanswered questions”  before slinking off.

So what was the question they all wanted an answer to?  Luckily, we had the noble Ian Gray, a towering figure in the history of the Labour movement, to ask it on behalf of the people on Scotland.  Long may it be known as the “East Lothian Question.”

As the chamber erupted in riotous laughter, it was John Swinney who most accurately captured the mood.

Northern Ireland’s First Minister was probably the only one who wasn’t talking about unanswered questions and seemed more keen on pointing out things he thought we didn’t even need to know,

The people of Scotland do need to know there are many people throughout the UK that feel they have a very valuable contribution to make.

No, no we don’t.  Anyway, for all the work done by Alex Salmond & Nicola Sturgeon to convince people to vote Yes on Tuesday, they were well and truly trumped by another duo; Richard Madeley & Katie Hopkins whose performance on Wednesday was really quite something.  Sadly, the video evidence has now mysteriously disappeared from YouTube having been shared by Yes Campaigners across the land. The duo were joined on Channel 5’s “The Wright Stuff” by the only marginally less offensive Ronni Anconia & Jeremy Edwards, to share their ill informed opinions and ponder the great… unanswered questions, like:

Would they open their own embassies?

What have we done wrong??

Richard also pondered why “so much negativity flows from Scotland to us.”  It’s an interesting concept of “us” that doesn’t include everyone north of Carlisle (where Madeley reliably informs us he used to work and “never felt like a foreigner”).  But of course, the greatest unanswered question was reserved for the poor caller, who suggested she was a supporter of independence.

Are you a bit or a lot anti-English? 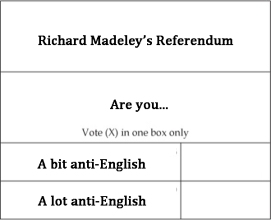 While he was sternly rebuked by the caller, he continued to prattle on about “the undercurrent of real dislike for the English…almost contempt.”  I’ve dealt with this before at length but if you want to see contempt , here’s what Katie Hopkins looks like when someone Scottish is talking. 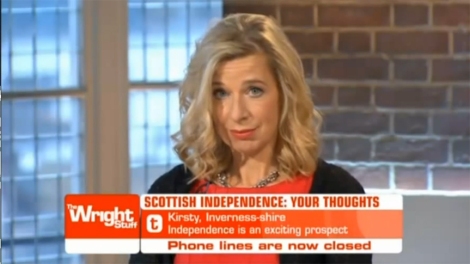 Katie was in fine form, saying we were cherry-picking and wanted to keep the best bits of Britain like maybe houses or working or the idea of putting one foot in front of the other or most shockingly DOCTOR WHO (although how England will manage when we say they can’t have Peter Capaldi, no-one said).  It wasn’t really clear whether she wanted independence or not.  We were told, “we shouldn’t be giving them the choice to become independent” and also treated to this gem,

If they are going to be independent, you crack on Scotland

I must confess I’m not doing so well cracking through the White Paper but it’s pretty clear that so far, nobody else is either.  I’m sure I’ll find bits and bobs I disagree with.  I’m all for keeping Doctor Who but I’d pick different cherries from the ones the SNP want.  That’s fine, I’ll take someone else’s cherries over Britain’s lemons any day. 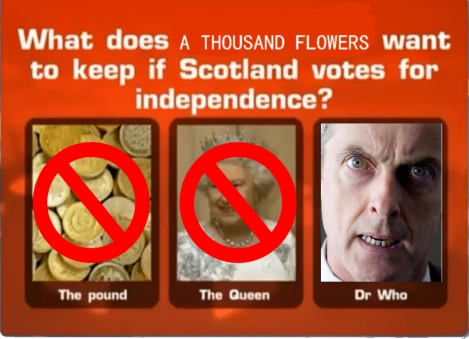 No-one who’s serious about politics believes that any document has, could or will ever be written which will provide every answer.  But we should be positive about the fact that for the first time, someone’s had a crack at outlining what an independent Scotland might look like, in such great detail.  The White Paper is little more than the opening contribution to a long debate about our future, other options are also available.

Better Together have been trying to pick holes in this and that (most notably, currency…yawn!) ignoring the fact that Scotland has no control over fiscal policy right now anyway.  While they ask “Where’s your plan B?”, we should be asking “Where’s their plan A?” 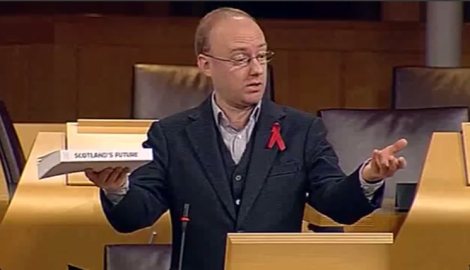 While the Scottish Government is doling out a massive document about their ideas, the Tories are scouring cyberspace deleting theirs.  While we’re reading the White Paper (probably, maybe, eventually), some folks are out there doing a better job convincing undecided voters to give Britain the boot than any of us could. So it’s a polite applause for Alex & Nicola and a stonking great standing ovation for Richard & Katie. 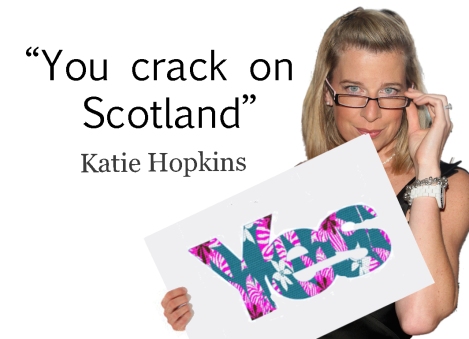 One response to “White Paper has the Wright Stuff, apparently”