With Equal Marriage legislation finally enacted, the wedding planners have never been busier.  Not everyone who’s been living happily without state approval up to this point has been rushing down the aisle but the industry is certainly benefitting from the pink poundage.  When you consider how many same-sex couples have already had a massive, overpriced party (when civil partnerships became law) may now have another one, it’s no wonder so many venues have been flaunting their gay credentials.

One venue which appears to be struggling to unlock its potential in this area is the Loch Lomond Waterfront, a luxury resort, hotel and alleged wedding venue in Balmaha.  John and Steven Devaney told the press that the hotel’s owner refused to allow them to host their wedding there and made various openly homophobic remarks, including such gems as, “we can’t allow people like you here,” before they were made to leave.  John is quoted in The Daily Record as saying,

I told her she was entitled to her beliefs but that gay marriage was now legal, but she just said she was the owner so she could say and do as she liked.

Except, of course, the law says otherwise.

In the interests of balance, I feel it’s reasonable to draw attention to the only statement currently available from the hotel. If I’d been accused of homophobia in the Record, I wouldn’t have opened with, “we would like to put the record straight,” but that’s far from the weirdest part.

The statement has been reported as a “denial” and certainly referred to “false allegations” but what it denies and what it doesn’t raises more questions than answers.   “Suzanne Cottam did not say the words attributed to her” is the only specific rebuttal of any of the claims made.  Words aren’t what the law cares about though; people can say homophobic things, and be called homophobes for it, without anyone going to jail. The law does care about whether you refused to serve someone their dinner, said they couldnae get a poke of crisps or denied them a place to sleep because you’re a bigot.   It is illegal to refuse to provide a service, such as a venue, to someone based on their sexual orientation.

Access to Monster Munch is an essential human right

If you respond to the suggestion you broke the law without explicitly denying that and divert attention to the words used, you deserve speculation about whether you broke the law.   If you miss out any reassurance for your potential customers that you don’t discriminate but for some reason refer to “Christian values” and the “dignity” of everyone, you’ve drawn attention to the fact that it’s  not “dignity” you’re advertising on your website, it’s a wedding which may not be available to some people.   Are there other moral or sexual tests we need to endure first? It would be nice to know.  But if you aren’t going to tell anyone and instead use threatening legalistic language directed the press in an attempt to make them stop asking questions, people will be forced to draw their own conclusions, like the conclusion you’re a massively evasive wanker.

Unfortunately, this is far from the first time stories of open discrimination against gay people by businesses have been in the media, despite the fact we always seem to win and they always seem to lose.  B&B owners Peter and Hazelmary Bull, who refused to allow a gay couple to book a room, lost their case, their appeal and their further appeal to the Supreme Court, being forced to stump up £3600 to the men. Michael Black and John Morgan visited Berkshire back in 2010 and were left without a place to stay as a result of homophobia and back in 2004, the Cromasaig guest host in Kinlochewe, Wester Ross had its Visit Scotland recommended status removed when the owner refused to provide a room to a gay couple and made horrendous homophobic remarks. 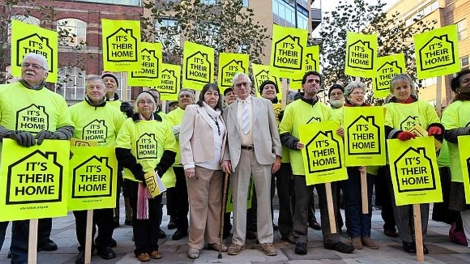 The Bulls: Despite support from the fundies, they lost over and over again.

You only have to look across the Irish Sea to understand where these dangerous homophobic arguments can lead. Following yet another time some bawbag business decided that the law didn’t apply to them, by refusing to bake a cake on the basis it was a bit gay, the DUP and the Catholic Church have manufactured a massive rammy, in an attempt to force a change in the law. The DUP are now calling for businesses to be given the right to deny services to people on the basis of “religious belief.” The proposed private members bill has thankfully been killed off thanks to Sinn Fein raising a petition of concern, also signed by the Green and NI21 MLAs, which would force cross-community support which the Bill simply doesn’t have…well, not in Parliament anyway. But the extent to which the most conservative and reactionary elements in Northern Ireland have been attempting to chuck a rainbow flag into their dizzying mix of fucknuggetry is thoroughly depressing and contemptible. It should remind people everywhere that our rights remain a hot topic and given what’s happened here this week, it’s not a problem unique to Northern Ireland.

Ok, it was more than a bit gay.

Scotland’s discrimination laws are rarely tested, not least because it requires those discriminated against to be arsed to dedicate copious amounts of time and usually money taking companies through the courts.   Calling for the law to be tested sounds dead radical from behind my keyboard but it’s not for me to be making demands of people who’ve had a shit time and are entirely free to just get on with their lives and indeed their now much speculated upon nuptials, in peace, with or without a really gay cake.

But people do go to court and win and I wouldn’t be doing my job if I didn’t sneak in another menshie of Robert Gale, who was denied entry to Polo Lounge on the basis he was a wheelchair user, who went to court and won.   When businesses know the laws we’ve fought to win will be defended and protected, they become worth something.   If this doesn’t happen, we could slip back.  If we tolerate any discussion over whether the basic provision of goods to LGBT people is a matter of conscience, opinion or choice, we’ve already lost.

Robert Gale (left) and his partner Nathan celebrate winning their case against the Polo Lounge.

This is about what kind of country we are, who our glorious luxury venues are for, who our countryside is for.  If gay people can’t go for a walk knowing there’s a pub they can go to at the end, if venues advertised as providing services can refuse to do so without consequence, we are forcibly excluded from activities everyone else takes for granted.   Given the authorities increasing reluctance to allow any form of camping about on the bonnie banks, it’s simply not acceptable to leave LGBT citizens out in the cold.

“People like us” are everywhere and we won’t take a long walk to the next wee village, just because you think we’re a bit too flouncy to eat your scones.  Wankers who don’t like that can take the high road to fuck.

AND PROUD OF IT

Something equal this way comes?