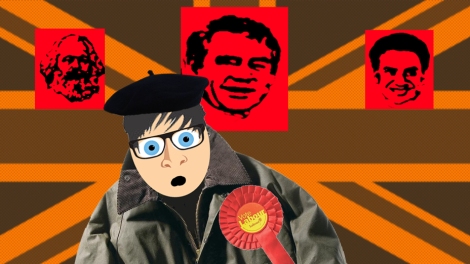 Firstly, please excuse my absence from the Scotland region of late but following our great victory over Salmondism, the class struggle has known no borders.  To give thanks to our comrades from the North, who flooded Scotland with their solidarity in the run up to the vote, I decided to “do an Owen Jones” and extend my solidarity to those fighting against nasty nationalism in the Heywood and Middleton by-election.

As comrades may have heard, the by-election was a political earthquake, as the workers rose to endorse the Labour Party and master Miliband, who now looks certain to experience his class coronation in 2015.  The Central Committee for Massively Reduced Majorities (Faragist-Leninist) has already made clear we will not capitulate to the smelly kippers, by ensuring our future BRITISH Labour Government insists everyone who is a foreign must learn the language of international proletarian struggle (English) and will have their benefits cut, in an act of solidarity with their brothers & sisters who had the class consciousness to have been born here.

But it is not Comrade Miliband who I wish to pay tribute to today – his ascent is already assured.  I want to draw attention to a towering figure in our Labour & Trade Union Movement whose reign is so often maligned, a man who ensured our vision for home rule, which we carried as a timeless beacon throughout the entire last 4 days of the campaign, triumphed over the bourgeois separatist idealists.  So raise your fists to the man who saved our United Kingdom, all hail Brother Brown!

Far from just taking loads of credit for scaring old people, the Great Gordon has made clear that he will implement home rule by any means necessary.  All true revolutionaries know that capitalism cannot be defeated by pursuit of a reformist agenda but only but only through a process of glorious petition.  The American Petition of  1765 which brought federalism to America, the French petition which established the new republic and of of course, our Bolshevik Brothers October Petition of 1917.  Chairman Brown has spoken,”change.org must come.”

Let us ourselves remember the record of the Peoples’ Prince, as humble Lord Chancellor he took us beyond boom and bust economics and towards a future of never-ending solidarity and surely any future Labour Government must continue that legacy.  His internationalism helped build links/pipelines with our brothers and sisters in Afghanistan/Iraq and in epoch ahead, which definitely has no historical connection to the previous one, the class war may again create the need to send international brigades to oil rich nations.

Brother Brown will  continue to fight against nationalist slogans like, “English votes for English laws.”  Voting is a sham under this bourgeois democratic tyranny, the material conditions for real democracy come only when we all vote Labour.   Every Marxist knows that we have nothing of value but our work, so let’s reject the division of our enemies and rejoice once more in raising the standard of internationalist Brownsim – “British jobs for British workers.”

There is, of course, only one way to ensure the federalist home rule which was promised to us by Brother Brown – voting Scottish Labour to allow us to elect a Labour Government to do whatever it is we all agree on afterwards in the spirit of internationalist co-operation.  This would also put real class power back in our hands, the workers could even start a petition to call for Ed Miliband to do all the things that were in the Labour manifesto.

Reformists, like that Nicola Sturgeon (who as I’ve mentioned before, Trotsky would also not have been able to abide), are now arguing for some sort of “home rule”, whatever that is.  So we are thankful that revolutionary Brownite forces are offering Parliamentary resistance to this divisive notion, which we have always stood bravely against.

All hail Brother Brown – he will not  accept the “toxic cocktail” on offer from the Tories, which would tear this country apart and represent an act of treachery to our class.  I know every member of our Great British Labour Party can proudly say that drinking toxic cocktails with the Tories is something they would never, ever do…

Reject nationalism and reinstate our proletarian dictatorship with Brother Brown & Red Ed.  What could be more radical than doing that again? If you don’t know, vote Labour.

Only a Labour Majority will give the workers a mandate to deliver Unilaterally Declared Communism  in 2015.

Workers of the regions, United with Labour

All Hail the Big Red Bus