So a few days ago, in East Belfast, some folk round about get wind that they’re getting a new neighbour. A new neighbour NAT from Belfast, but from Nigeria – who’s only been in OUR WEE COUNTRY for a mere 4 years. So some lads put it upon themselves to start a wee welcoming committee, even going to the effort of making banners for him. Really sweet homemade banners. Banners with “LOCAL HOMES 4 LOCAL PEOPLE” written in big fuck off red writing and just so their new pal wouldn’t miss them – they brandish them right all over the guy’s new digs. Nice. 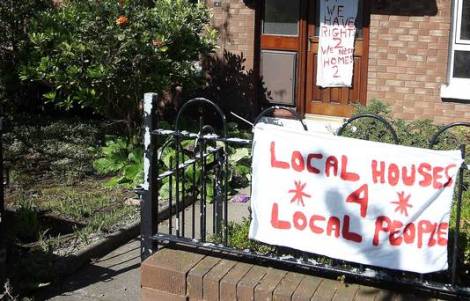 For those unfamiliar with the more boring aspects of the North, you’d maybe be expecting the high heid yin to condemn the actions of these dangerous fannies who don’t want a foreign black guy down the road from them. Well… naw. Our First Minister, Auld Peter Robinson is “not sure this can be described as racism”. Because intimidating a black guy and his kid from entering their own house isn’t the clear-cut racism that you thought it was! Pete the prick goes on to say that as the banner-making wee dicks did not INTEND to be racist, they weren’t. Even if this utter bullshit was true and they weren’t being racist wee fucks (THEY WERE THOUGH FUCKING OBVIOUSLY) Mr Robinson should get down to some racism 101 study. IF YOU DO SOMETHING RACIST, YOUR INTENT DOESN’T MEAN SHIT.

This level of racism in Northern Ireland is not something new, although there has been a terrifying increase of vicious attacks against people of colour in the past year. In April alone, Belfast was the scene of a Romanian guy having to go to hospital after getting actual shite flung at him first thing in the morning; a 23 year old guy got racially abused before being stabbed in the leg; and this just days after an Irish Traveller family, which included 5 children, were targeted in a gun attack after they moved into their new house. The end of the month saw three young people – one, a woman – brutally beaten with golf clubs by a gang of fifteen. Their crime was being Polish. Awk sure, there was an Assembly debate about all this here shite, a chance for those in power at Stormont to talk through what could be done. Did Robinson show up? Did he fuck. IDUNO but maybe it’s shit like this from the fucking main guy in charge that makes only 39% of people of colour living in NI feel like they have some sense of belonging to the province.

So it seems Rank Robinson has been fucking gagging for Weekly Wanker status for a wee while. It was just last month that he publicly went gooey eyed for consistently racist and Islamophobic, ballbeg preacher James McConnell – whose Church of Hate Sneaky Pete frequents (unlike me, he wasn’t dragged in as a child, he’s actually goes there of his own free will).

In one of his delightful fun-filled speeches, McConnell stated that Islam is “a doctrine spawned in hell”, “a new evil had arisen”. Horrendous and pretty fucking dodgy for even a Belfast preacher to spout but First Minister Petey would be too smart to weigh in on that surely? Um no. He straight away defended McConnell’s “right to free speech”. Would you like a fedora with that statement mate? Hilariously, Robinson then went on to say he “would not trust Muslims involved in violence” but… get this… he would “TRUST THEM TO GO TO THE SHOPS FOR HIM”. Queues of Muslims immediately formed outside the DUP office to see if there were any tasks they could fulfill for him.

These remarks came shortly after the big Boko Haram kidnapping, as if the actions of a few makes straight-up disgusting Islamophobia socially acceptable – from not just ordinary people but also extremely influential politicians. Belfast based journalist Mohammed Samaana says it better than me:

Prophet Mohammed himself asked Muslims to treat women well. Blaming Islam for the acts of Boko Haram is no different to blaming Christianity for George Bush and Tony Blair’s invasion of Iraq (which resulted in the death of hundreds of thousands of Muslims), or the ethnic cleansing of Palestinians in 1948, or the rape and murder of Bosnian Muslims by Christian Serbs.

You’ll be shocked to hear that for Peter Tolerance Robinson, this is far from the first time that he has made and defended statements that clearly cross the line from being whiney free speech to full blown hate speech. You might remember that back in 2008 there was a pretty horrendous homophobic attack in Newtownabbey, and true to form, instead of immediately condemning a brutal hate crime, Big Cunt Peter (I’ve ran outta insults, OK) decides to big up his MP wife Iris Robinson, whose response to a gay fella being left for dead was to recommend a psychiatrist “to help homosexuals trying to turn away from what they are engaged in”. I shit you not. Even the PSNI investigation concluded that her comments breached hate crime laws! Parochial Pete’s reaction was “It wasn’t Iris Robinson who determined that homosexuality was an abomination, it was THE ALMIGHTY“.Jesus fucking Christ. (Two weeks later the same bam states IN PARLIAMENT that homosexuality is “viler” than child sexual abuse. Just. What.) 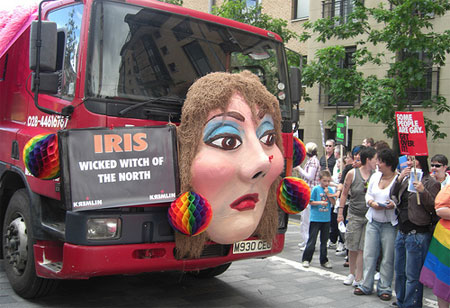 …so here’s to you 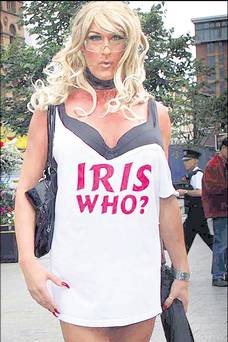 Peter Robinson makes writing for the Weekly Wanker pretty fucking easy, given that what comes out of his mouth is a never ending pile of steamy shite. I could have mentioned a couple of his dodgy financial dealings but I’ll conclude this with a bit of history instead. I really enjoy when Big P gets on his high horse about (Deputy First Minister, Sinn Fein’s) Marty McGuinness’ IRA past, as if Robinson has never touched a gun. In 1986 Petey, with his passion for all things peace, led a group of 500 loyalists to attack an unmanned Garda station in Monaghan. They graffitied the shit outta the place with loyalist slogans and then held a military parade along the main street, attacking the Irish polis. Don’t worry lads, instead of getting on with his jail sentence, he opted to pay the £17500 fine instead, prompting this message from the South, “Thanx 4 the Puntz Pete Bbz, luv the Republic Xx”

getting lessons in sub-tweeting from Mr R