Demonstrations against the Scottish Defence League should, on the face of it, be a fairly straightforward affair, with the Sieg Failing knuckledraggers and keyboard fantasists who make up their ranks being on one side and everyone else on the other. Of course, they rarely are, and when you throw George Galloway into the equation, as with Monday’s mini SDL picket outside the Assembly Rooms in Edinburgh, things start looking a lot more complicated. For starters, the staunchly unionist SDL were protesting against a talk that “Islamic hate preacher” Galloway was giving on er… why people should vote No to independence! The SDL chose to conduct their protest against Galloway’s No rally by waving union jacks and singing Rule Britannia. Confused? You will be.

Galloway’s is the #indyref intervention that literally no one asked for. Since December, the pseudo-lefty businessman, cat impersonator, former Weekly Wanker and, when he occasionally finds the time, MP for Bradford West, has been gallivanting around Scotland telling anyone who’ll listen why they should “just saw Naw” to independence. Provided they pay £10.00 (+ booking fee) to get in that is – after all, those designers suits don’t come cheap and this is the man who once famously said he “couldn’t live on three worker’s wages”.

On Monday night, Galloway was in Edinburgh, the first of nine dates he has planned for this year around Scotland. Pro-independence left-wingers under the Radical Independence banner had already been planning to leaflet those going to the event, but when the SDL announced that they too would be picketing the event, other groups including Unite Against Fascism decided to get in on the act to counter the far-right threat. With about six different combinations of ways in which it could potentially kick off, I headed along to see how events would unfold.

Inevitably, the SDL were meeting outside Wetherspoons and, true to form, there was only about eight of them, which at least meant they could all fit under the same bus shelter. I guess it’s a step up from their usual meeting place of inside a telephone box though, amirite??!?!?

By this point the assorted Galloway minions, Yes leafleters and leftie paper sellers were gathering about 20 feet down the road at the Assembly Rooms, eyeing up the SDL and waiting for the moment when they might to decide to make a move. It didn’t take long, leading to a scuffle as all ten of them tried to march straight through the anti-fascist protest. Chants of “commie scum” and “Nazi scum” took over, but the Battle of Stalingrad this was not, as the police successfully persuaded the SDL that if they would just go over to their designated protest area at the other side of the doors, everyone would then be able to quietly get along/spend the rest of the night shouting threats at each other without any physical contact. 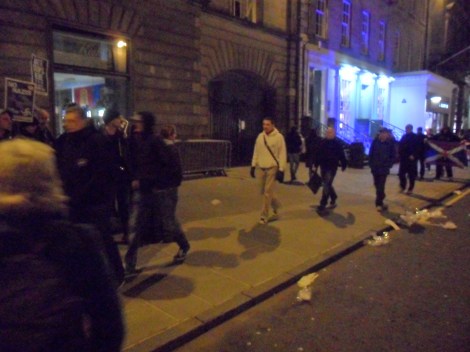 The SDL’s primary tactic seemed to be to bore everyone else into submission. Although occasionally broken up by chants of ‘S S SDL’, for the most part they just had some old guy on a megaphone, doing his best impression of a particularly monotonous Calvinist sermon. It was difficult to make out much of what he was going on about, although at one point he raised his voice enough that we could hear him saying that “if you love minorities so much, why don’t you move to Africa?”. A valid point??!?!

Things weren’t all that much more exciting over the other side of the great divide, where some Swappy guy was on the megaphone shouting about Nazis and how the SDL would all be dead if it “wasn’t for the coppers”, which is always a much easier thing to shout when you’re standing behind a line of coppers.

It’s fair to say the SDL weren’t particularly riled by the Nazi chants, with their Ian Paisley impersonator intoning that “I think you’ll find that you SNP supporters are the real Nazis” and launching into another boring monologue. Although it’s true that skinhead elements have flirted with them in the past, the bulk of the SDL’s “ideology” stems from British nationalism, tabloid anti-immigrant hysteria and loyalism rather than any allegiance to Nazism. Links to groups like the Golden Dawn are therefore pretty tenuous, although if you’d like more information on this subject I can refer you to the placard below, on which UAF have helpfully printed a complete history of facism 1922 -2014: 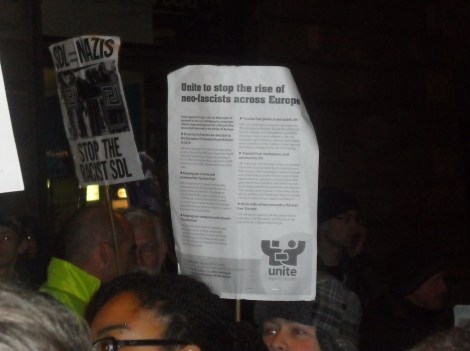 just hold that still for a second…

However, what really got to the SDL was when a few people started chanting “You can shove your Union Jack up your arse” and “We hate Galloway more than you!” at them. While the second one just really confused them, the former made them so mad they resorted to digging out the worst insult in the fash lexicon… “You’re not British any more!”. Unfortunately for them, it didn’t have the desired effect as our side gleefully erupted into a chant of “We’re not British any more!“. By this point the SDL seemed to have forgotten they were even there to protest George Galloway, although the same can’t be said of the other side, where Galloway’s Scottish fanboys (there’s two of them) were making a desperate last ditch bid to get folk to go inside. We can only speculate – maybe they’d just come over with a fit of generosity – but the fact they were dishing out free tickets would seem to suggest that the venue might have been mostly empty. People had been drifting into the Assembly Rooms over the course of the evening, all of them awkwardly avoiding eye contact with the demonstrations either side of them and hurriedly making their way in, which seemed a bit unusual given that they were going to see a “left-wing firebrand” speak. The numbers weren’t exactly massive, but steady, and the demographic struck me as at odds with who I’d have expected to be attending.  It then became clear that the Assembly Rooms also has a Jamie’s Italian inside it, sharing the same entrance. Ah right then, that would explain it…

Handily, Galloway’s entire speech had been printed in booklet form which someone handed to me outside, meaning I could find out all his fascinating opinions on Scottish independence while being spared an hour of over the top oratory/losing the will to live. There’s absolutely nothing new – he rails against Salmond’s “monocratic” rule, moans about how he doesn’t even have a vote (cause he lives in England), how rUK would be left to Tory governments in perpetuity if it lost Scotland’s “71 non-Tory MPs” (Scotland has 59 MPs and that whole argument is bullshit anyway), how outrageous it is that poor wee Nigel Farage got chased out of Edinburgh last year, and how Scotland would go bankrupt without the Barnett Formula and building ships for the Royal Navy (yes, really). Clearly there was fucking no one at Galloway’s event, as if there had been surely someone would have pointed out to him his glaring error about the number of Scottish MPs and prevented him from repeating it on STV later that night, for which he was then widely ridiculed. In fact, the only novel thing Galloway appears to said all night was the headline grabbing revelation that he “fancies” being the Prime Minister of an independent Scotland, presumably if his Naw bid fails. Fortunately there’s about as much chance of that happening as there is of the SDL ever following through on any of their threats and/or managing to have a demonstration of more than 50 people, so we should be okay!

Outside the Assembly Halls, it was pretty cold and the police decided it’d be a good idea to move everyone along, presumably so that Galloway could give his speech to an empty room in peace and the diners of Jamie ‘UKIP are interesting’ Oliver’s Italian could continue buying overpriced food and pretending to be a in posh restaurant without being shouted at for being Nazis, commies, terrorists, separatists, hate preachers or unionists from four different groups of people on their way in and out. What was it we were saying Naw to again? 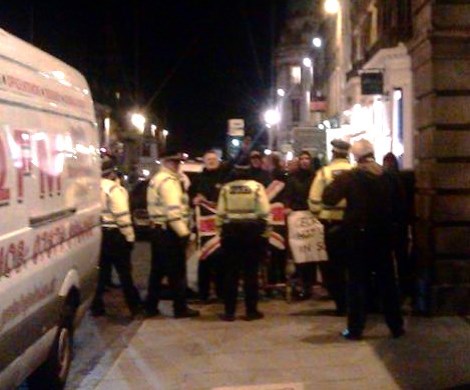 EVERYONE WANTED TO PROTEST IN GLASGOW ON SATURDAY