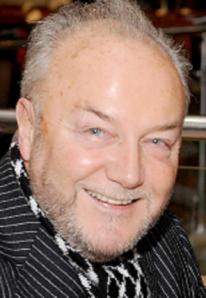 Upon reading George Galloway’s latest ravings, my immediate thoughts were: “one for the wank bank”. Almost certainly the first time anyone’s ever said that about Mr G, sadly for him my intention was to christen him Weekly Wanker. And here he is. Dishonesty and demagoguery turn me off, you see.

So, what’s he been up to now? I’m presuming you saw something about Nigel Farage getting ambushed by Radical Independence protesters in Edinburgh last week. It dominated the news cycle for 48 hours, bursting that Little Englander’s bubble and exposing the growing rift between Scottish and rUK politics.

Liberal bores bleated about an attack on freedom of speech, an argument deflated by Ben Wray on his Communiqué Scotland blog. The UKIP leader himself described RIC (without irony) as “fascist scum” and accused us of anti-English racism. 2 arrests were made on the day, one of them, er, English. Possibly a self-hater, I hear he poured a bottle of cola over Lord Monckton’s heid. Glorious.

Nasty Nigel had expected the usual fawning media coverage, but was outraged when a journalist asked him some tricky questions, culminating in the petulant moment when he hung up the phone on Her Majesty’s Brittanic Broadcasting Corporation. Again, pretty funny tbh.

But enough of Monsieur Farrago. We already called him a Wanker here. This is about ‘Gorgeous’ George. Despite the glaring truth that this was a peaceful (if passionate) protest against a hard-right rabble rouser, Comrade Galloway concurred with the MEP’s assessment that this was “the ugly face of Scottish nationalism”. In a weird article posted in an obscure corner of the internet, the Respect MP also claimed that an independent Scotland would inevitably suffer rising poverty, followed by a backlash against the English, then Irish-Roman-Catholics (quite a mouthful) then non-whites. Elsewhere he described Farage as “a poor man’s version of me”. Please note, the post is titled ‘Scotland, Farage and Me’ – it is not the only post on the blog with a title containing the clause “and Me.”

Strange bedfellows indeed. Other than a bulbous ego (and sexism, and opportunism, and…) the pull factor between the 2 new chums is that most reactionary of political forces: British nationalism. Galloway almost tails Farage’s xenophobia with “Are the people of Liverpool or Leeds really foreigners to you?” – as though foreignness would imply something negative or scary. Dan Paris took this up in an open letter on National Collective: “No, George, they’re not – certainly not anymore than the people of Dublin are. But then, what if they were? Any true internationalist understands that the bonds between people come from our shared humanity, not our common citizenship.”

Not only is the former Labour MP mistaking the unity of the British state for the unity of the working class, he’s ignorant of the near-universal embrace of the social union. When you speak to people about independence, you never hear anyone talking about harking back to ancient Celtic culture or insulating Scotland from the outside world. Or hating the Sassanachs for that matter. In fact, quite the opposite. Devolution and the self-determination debate have tended to make Scots much more relaxed about our relationships with near neighbours and the wider world. The wan that smelt it dealt it: all the cultural nationalism is coming from him.

Even I wouldn’t put this on an election leaflet ffs

The dystopian future he predicts for an independent state will strike many as absurd. Catholic schools won’t last 10 years, apparently. Those of us with Irish heritage can expect a return to the Victorian age, with employers’ doors slammed in our face and hate mobs after us in the street, presumably. After all, “there ain’t no green in the Saltire” (yes he really said that). I wonder: is Mr Galloway so misinformed and delusional that he truly believes this, or is he cynically cross-breeding Catholic tribalism with Better Together fear-mongering? Is the British state really the only thing stopping Jock from tearing into Mick?

I can almost give the Honourable Member for Bradford West the benefit of the doubt. It is, after all, 8 years since he last represented a Scottish seat. A lot has changed in that time. Contemporary Scottish nationalism is of a distinctly civic type; focused on capturing the social-democratic ethos abandoned by Labour, and ending the democratic deficit which has inflicted a series of unwanted Tory governments on us. Scottish identity is no longer monopolised by white Presbyterians with a militarist predisposition. I ‘like’ at least 4 facebook pages run by Celtic fans who advocate Scottish independence. As far as I know there is no pro-union equivalent.

Many factors are worth considering in the disintegration of the old monolith: decline in religious participation; the changing ethnic complexion of our cities due to EU enlargement and asylum seeker dispersal; the development of human- and minority-rights narratives; progressive measures taken by the devolved Parliament. One hot potato is worth a mention: the Good Friday Agreement. The end of the Provo armed struggle has taken some of the edge off the hatred on both sides. Though partial and incomplete, there has been some space for reflection on the ravages of war. Moreover, the British media cooled its anti-Irish sentiment, switching attention to demonising Muslims at the dawn of the War on Terror. When Galloway raises the fear that Holyrood would become “another Stormont”, he is expressing an ossified view of the world as it was 40 years ago, as if power-sharing was never agreed and the Troubles were still raging.

Scotland, for all its faults, is a less divided society than the 6 counties. Despite Galloway’s insinuations, we do not have political parties based on confessional affiliation. His role here is very sinister – tell people that the SNP are the Proddy Party, not for us Kaffliks, whose natural home is Labour (and by extension the No campaign). His narrative of a sectarian binary between Scotland’s 2 main parties is nonsensical in the 21st Century. I can think of no better nugget to negate this thesis than the Orange Order’s instruction for members to vote Labour as a means of maintaining the Union.

Anti-Irish bigotry does still exist, of course. In his reply to Galloway over at Bella Caledonia, Liam O’Hare flags up some prejudicial comments he’s been subject to since the Farage barrage. But where do such murky attitudes stem from? Liam is correct when he says “Galloway is frankly out of touch if he thinks it is Scottish nationalism which fuels this.” Indeed, it is unionism which acts as an incubator for a British chauvinist identity based on religious bigotry, monarchism and glorification of imperialism.

So aye, he’s talking shite. Dangerous shite. And now he’s spitting the dummy when people try to pull him up for it. In his own words:  “I have had to block hundreds of Scots on Twitter for example, who deny my own right to speak on Scotland’s future despite my having been born and raised here.” Call me petty, but I seriously doubt he was in Scotland when he wrote ‘”here”. He’s blocking anyone who questions him, including my teenage nephew who lives in London and didn’t even mention Scotland. The guy doesn’t really like social networking when it involves other people saying things. He recently submitted a motion at Parliament calling for a clampdown on free speech on Twitter. At least he must have shown up at the Parly for once, which is nice as he attends less than anyone else, making it all the more confusing that he refuses to comply with the socialist policy of taking a worker’s wage (a la the SSP MSPs). In fact, he once said “I couldn’t live on 3 workers’ wages!”

There is so much more to moan about, but I’ve spent enough time thinking about this odious individual for at least a week, so I’ll leave you with THAT cat video. Please use the comments section below for more Galloway gripes. We’ve got an article on UKIP & the EU here. Oh, and don’t forget to tweet us @unsavourycabal