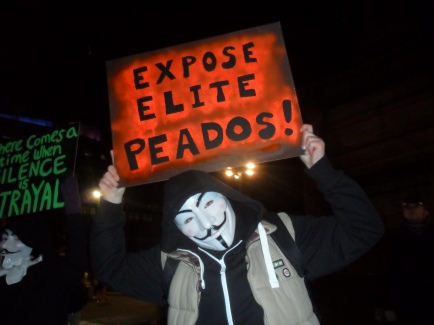 So a couple of weeks back it was brought to my attention that there was going to be a revolution™ in Glasgow last night. And not just here, but every city in the world! However as I live in Glasgow I decided this was as good as any other place to casually observe the global revolution unfold, so George Square it would have to be. Especially as I had other things to do on Tuesday like um, going to court and watching fireworks. Fuck the Government! Sorry, I mean fuck anything unfair!

My first major hurdle to being able to go along to the revolution though was that I don’t own a V for Vendetta mask, which I had assumed was a prerequisite for taking part in the march of a million masks. Fortunately, lots of helpful people were on hand to let me know where I could obtain such a mask, like on Amazon or eBay China. Cause really if the revolution isn’t merchandised under license from Time Warner then it’s not my revolution.

Unfortunately I didn’t have the time/effort to expend on this so it was without any mask that I ventured along to George Square to see what the fuss was about. The fuss was mainly about 50 Assange fanboy bros who enjoy IRC chat and being paranoid about the NSA in their spare time and some confused kids standing about with a megaphone in the middle of the square. We are Legion and We are One and None of Us Are Really Sure What We’re Doing. However, 5.40pm saw the arrival of all women samba ensemble Sheboom, doing their thing with making a lot of noise with steel drums. Maybe they’d always planned to leave ten minutes later or maybe they er, just got a bit embarrassed about the whole thing and made a sharp exit. This vacuum was soon filled by some dude letting off a firework in the middle of the crowd though and then a return to the revolving megaphone. No one could really hear a word that was being said so just rapturously applauded whenever it sounded a bit like they should be.

THERE ARE MILLIONS OF US HERE IN SPIRIT! (no there isn’t there are sixty of you wearing stupid masks)

WE SHOULD BE IN GEORGE SQUARE EVERY. SINGLE. DAY. UNTIL THEY LISTEN TO US! (oh no please spare us that again)

SOME OF US ARE BRAVE ENOUGH TO SHOW OUR FACES, SOME OF US CAN’T! (yeaahhh!)

Does anyone know what’s going on?

Occasionally a member of the SWP (on a full turnout!) would jump on and start spouting something about New Labour or the bedroom tax and everyone would clap along to that as well. This must have all been great if you’d come along for a lecture about the new world order or waking the sheeple or how white men who like the internet are oppressed by the system and they just won’t stand for it anymore. But I was looking for a revolution and despite the overblown rhetoric I was beginning to suspect I was in the wrong place. “I think it will be a lot bigger in London” offered one participant.

We’d had about 45 minutes of this before someone suggested that they decamp what was beginning to resemble a V fanclub AGM to the steps of the City Chambers (the V is for vanguard). Cue the cops getting out their van and what’s that, SIRENS? THIS MUST BE IT! Oh no, it’s just a fire engine. Half the crowd were still dithering in the middle of the square though, perhaps not ready to take the radical step of crossing the road.

The Glasgow million mask circlejerk had nearly come to an end, the BBC still weren’t even covering it (#mediablackout !!!11) and twitter was just embarking on a mass self-aggrandisement exercise. Maybe there’s lessons for us all here, or maybe it was just a bunch of people in different countries wearing stupid masks.

2 responses to “Gunpower, Treason & Losing the Plot at Glasgow’s #MillionMaskMarch”