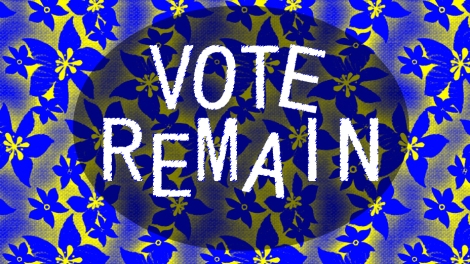 I hate the EU, I’ve said so many times.  There are powerful and compelling theoretical arguments for why lefties would want out, I’ve made them in the past – but today isn’t a fucking theory test, today is not a drill.

If we refuse to look at what a Leave vote will actually mean for the conditions of people, especially those on the breadline and those being forced to the margins, in this terrifying drive to “Make Britain Great Again,” we’re doing politics wrong.  We have to defend those who’re demanding our solidarity, we have to stand up against xenophobia, hatred and racism, we have to recognise the political reality of what Brexit Britain is already being engineered to look like by the Tory right.  Even if the EU is far from our utopian vision, we have to Vote Remain.

This campaign has barely been about the EU and I‘m not about to change that now – it’s been about a coup plot, by a group of far-right extremists who want to re-engineer our society in their image, using immigration and a perception that this is a chance to kick “the establishment” in the baws as its populist fuel.   If they win, they’ll probably have a mandate which far exceeds the mere 23% of registered voters who voted for Dave & Chums.  The potential (intended) consequences of this plot are pretty dire: widespread attacks on immigration and immigrants, another engineered recession which will again be used to enforce austerity, the removal of basic human rights, working conditions, environmental protections, more mistrust, more division, more of the stuff that keeps Tories in power. The ruling class know Cameron is done regardless of the result, so for many, this is their new plan.

The Remain campaign has been a fucking disaster, it was always going to be; it’s definitely suffered in Scotland for doing exactly what Better Together did and just scaring people shitless about the power of the market and how yer boss might have to sack you if you don’t vote the way he wants.   I’d be prepared to stand up to economic threats and Project Fear, if I had confidence the desire for constitutional change, and the forces behind it, were likely to create a better society.  We did and will continue to do just that, as we make the case for an independent Scotland.  But Brexit is a clear and well signposted attempt to create a much, much worse society: where even the extremely low bar of the EU is judged to be too high, where there are no limits to what Theresa May can do to your kneecaps.

And don’t give me this Scottish exceptionalist pish, about how Scotland being dragged out of the EU despite voting to stay in will be automatically amazing; how the pain of this life will be rewarded with a glorious future, how the workers need to be stood on to rise up.  I’m not buying this #sexycalvinism, at all.  This vote might result in a really elongated, complex process, in which Scotland has to undergo a series of huge economic shocks as we perform a constitutional hokey-cokey for the next few years, in order to get back to the status quo/worse, inside the EU…WOOP WOOP!  SNP! SNP! SNP! But people are starving in Scotland right now.  And neither Boris Johnson nor (frankly) another referendum will feed them.   It’s pretty arrogant to say “bring on the pain”, it suggests you’re not too worried about suddenly losing your tax credits or getting deported, so long as we get another referendum within a fixed time period – that isnae radicalism.  I sincerely hope this nightmare scenario doesn’t happen because I’m not a total bastard.

If Remain wins, we are still in for a long battle against the forces this referendum has unleashed: the racism, bigotry, the desire to go back to “the good old days” won’t dissapear, they can’t be packed up with the pasting tables.  But the failure of this wee right wing boys club to drag us out of Europe, solely to attack welfare, freedom of movement and human rights would at least create a tiny bit of space to start reaching, rather than dismissing, those who’re being won over by these ideas.   People are raging with the establishment for a reason but it would be such a cruel joke for those same people to be smashed by the Tories running the Leave campaign.   The gap between what they’ve been promised and what the political class will actually do in the event of Brexit can only create more distrust and turbulence, more hatred.

Some votes are about striving, some are more about surviving.  We’ll be here, regardless of the result, battling on – but we don’t forget that some people in our country don’t feel quite so safe right now.  And we stand with them, today and always.  I may not have much of a horse in the EU but I won’t kick people in the face by delivering a victory to the forces of the right.

Today, we’re stuck between this shitty corporate status quo and being dragged back to the Dark Ages.  In fact, we’re not stuck at all, that’s a very clear choice.

Don’t wake up to a Boris Britain on Friday.  If you can make it to vote today, please vote Remain.

3 responses to “The Shitty Corporate Status Quo Or The Dark Ages? #VoteRemain”