That’s not unremarkable, around 1 in 5 people will live to see their 90th birthday.  It should be noted that her maw reached 101, making her part of what was, for her generation, the 1%. 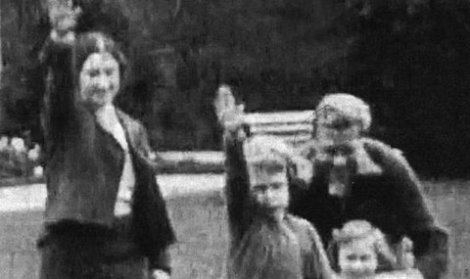 Our young ruler and her maw, giving a wee seig heil.

What’s really remarkable is the amount of fawning pish that’s been written about this person, for managing to wave (or was that a Nazi salute?), not really smile and still be alive, things which obviously have NOTHING to do with her vast wealth and access to an array of elite private units to oversee her health and indeed,  her family’s every whim.

There’s an election happening in Scotland right now, to send people to a building in which their first act will be not to represent the people who voted for them but to stand in line and in silence, before dutifully raising their hands to the Lord/sky and swearing allegiance to some random person, and any and all our her weans and their weans etc. etc., forever and ever, amen.  Which kind of makes me wonder…who elected the Queen again? 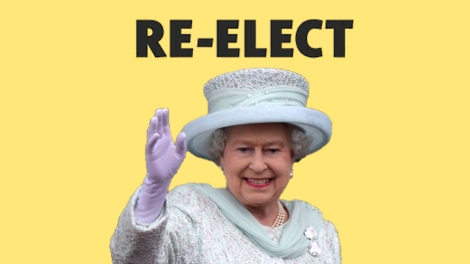 The answer in England is, quite literally, the Lord in the sky.  In Scotland though, the Queen is not the head of the church, “just” the Scottish state, putting her in a unique position of somehow needing to top up her heavenly tasks with some moonlighting and a few big hooses in the northern colony.

The financial cost of the monarchy is often disputed, while the lying scumbags/royal statisticians claim the figure is a mere 56p per subject per year, this excludes all the security and a myriad of other costs, forgets that the Queen and Prince Philip extract personal wealth from public assets and ignores the fact that not everyone pays tax.  Republic estimate the true cost at something like £334m a year, which is more like £11 a taxpayer.  So that’s about an hour and a half on minimum, sorry “living” wage, to fund these people to do what exactly?

Some essential royal costs include £14,692 for the Duke of York to fly not ten thousand men, but himself and his entourage on a roundtrip to see the golf, at Muirhead but even that pales in comparison to the almost quarter of a million pounds it cost for Prince Charles to book his own plane to Nelson Mandela’s funeral, which took place right here, on Earth.

But whether the monarchy was a vast expense or a massive industry generating billions for our economy – it needs to end.  Any claim to be a modern, democratic society is instantly refuted when you realise you’re actually not, at all.  “Royal Prerogative” (which means the Queen can do WHATEVER the fuck she wants) is something royalists say no monarch would ever use, obviously, despite the fact Betty has used it hunners of times, like when the Government of Australia was dismissed.

Up in her majesty’s northern quarters, support for the continuation of the monarchy is pretty shaky.  The SNP leadership of old, running a party less than a quarter of the size it is now, pretended to support the monarchy during the referendum coz they thought working class Protestants and the middle classes would get scared off if they didn‘t.  That’s a pretty weak position and frankly, I think it turned out to be bollocks.  The Yes movement motivated over a million people, not because it offered the status quo but because it stood for something else – a fairer, more equal, erm, monarchy.  The official message from those running the SNP and Yes Scotland clashed pretty glaringly with what most people out on the doorsteps had in mind when they thought of a new Scotland.   #sexyfeudalism has yet to take off.

Independence, for me, is the belief that we’re better off without a bunch of total roasters who no-one elected.  With so much chat about the precise mechanisms for another referendum, so much speculation about “triggers” and “game changers”, it’s sometimes worth remembering what it is many of us are trying to win independence from.  The British State is one of the things, the kind of society which exalts one family as rulers and insists the rest of us are subjects is another.  I don’t believe those are positions too extreme for the general public, I know they’re what most people who want independence basically think, at least if you consider the answers given by the new SNP MPs, 16 of the 17 who responded to a journalist said they supported the abolition of the monarchy.

With much fanfare over a new campaign for independence in the summer months, now’s the time to re-examine what was offered last time, in a huge range of areas – I’d suggest you can’t talk about fairness when you stand for this kind of royal unfairness, that claims to support equality mean very little when some are always more equal than others, that the promise of land reform is empty if so much of it if owned by this random family, that independence, with a monarchy, isn’t really independence.

But to be honest, if you’re paying attention to the Queen today (like I am), what I most feel for you is pity.

Prince, on the other hand, that’s royalty worth celebrating.

Down with the crown, long may the Purple Rain.

Why is anyone suprised that the Royal Family were nazis?