When Gordon Matheson resigned yesterday, I felt a tinge of sadness.  The man who’s led Glasgow City Council for the last 5 years may have made some horrendous decisions but he was a master of unintended satire.  For a brief moment I was, very selfishly, a wee bit scared. 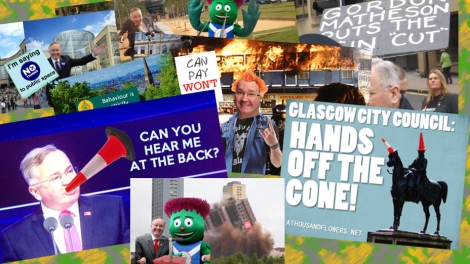 Gordon Matheson: A legacy of lolz

But fear not – once more into his breeks comes former council leader & MSP, Frank McAveety, who has quickly thrown his hat into ring for the “top” job.  Frank’s already risen and fallen a few times since joining Glasgow District Council back in 1988; ironically, perhaps his most notable battle during his spell at the council was against the man known as Lazarus AKA Pat Lally, the then Lord Provost.   Just as McAveety was elected as leader, Labour attempted to disappear Lally over his alleged involvement in the “votes for trips” scandal which plagued the council back in the 1990s.  There were rumours Donald Dewar himself tasked Frank with ousting the former leader.  Lally and his deputy took Labour to court over their suspensions and won but Frank’s loyalty to Scottish Labour’s top brass was soon to be rewarded.

When he wasn’t helping to bump off colleagues, McAveety was cracking down on Glasgow’s troublesome trees and flowers.  In a completely unannounced move,  George Square was transformed into a building site, with £200,000 spent on a “revamp” involving the cutting down of trees and the removal of flowers, to make more space, for corporate events. 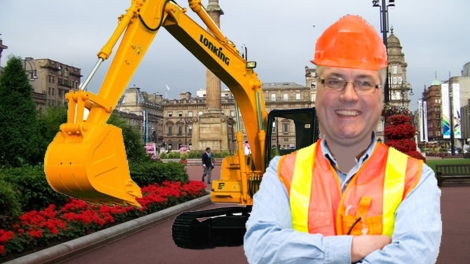 The Flowers will have their revenge. Oh yes we will.

The Council “mortgaged” George Square to Barclays Bank shortly afterwards and it’s since been increasingly closed off and used for commercial purposes.  Not that this was planned or anything…

Just 2 years into his reign as council leader and with his floral assault complete, McAveety announced his intention to stand for election to the newly reformed Scottish Parliament in 1999.   He spent the first Holyrood term as a junior minister, being reprimanded for his frequent “outlandish” photo ops, before being appointed minister for tourism, culture and sport in 2003.  For McAveety, as for Scottish Labour at Holyrood, it was pretty much all downhill from here on in.

As a supporter of the war in Iraq, McAveety was one night confronted by a man and a woman, who expressed their opposition to the war and to the planned closure of the Govanhill pool.  As someone who had a bottle thrown at them outside Maryhill Lidl for opposing the war, I can say with some confidence that heated exchanges on the subject were pretty common on Scotland’s street corners at the time.  Sadly McAveety was less philosophical about the fact that his support for an illegal imperial adventure based on a lie was open to question and  grassed his “assailants” to the Polis.  The pair were charged, as McAveety gushingly recounted how this was the, “worst intimidation in his life.”  In dismissing the charges, the judge declared, “If this was the most frightening thing he has experienced in his career then he must live a very sheltered life…It is naive and unrealistic of a cabinet minister to think he cannot attract attention on the streets, especially at a time when a war is ongoing.”  The two protesters actions were declared “fair game” by the judge, who stated McAveety had “over-egged the pudding.” 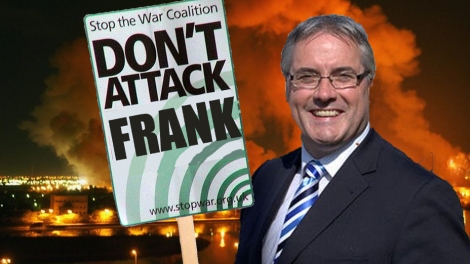 But pudding wasn’t the foodstuff which was to be Frank’s undoing. Just 2 days after his eggy court debacle, McAveety arrived late and visibly flustered to the Holyrood chamber, having missed his scheduled appearance to answer ministerial questions, he declared he had been unavoidable detained on ministerial business.  In fact, he was sitting in the parliament’s canteen, wolfing down a pie and beans. Jack McConnell quietly dropped Frank at the next ministerial reshuffle. 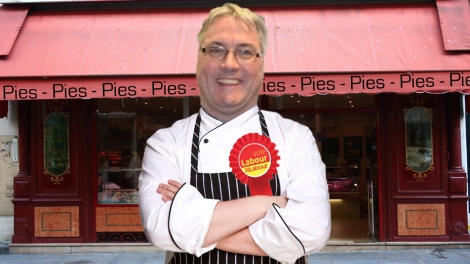 Who ate at least one of the pies?

By 2010, McAveety was doubtless wishing he’d could keep his mince encased.  At the Scottish Parliament’s petitions committee, he overlooked the fact his microphone was switched on. As he leered into the public gallery, the TV cameras picked up the following:

There’s a very attractive girl in the second row. Dark and dusky.

The heat’s getting to me. She’s got that Filipino look – the kind you’d see in a Gauguin painting.

The young women being ogled was on a work placement with the Scottish Green Party, she was just 15 years old.  McAveety resigned as Convenor of the committee in disgrace and lost his Holyrood seat at the 2011 Scottish election, to the tedious/odious John Mason. 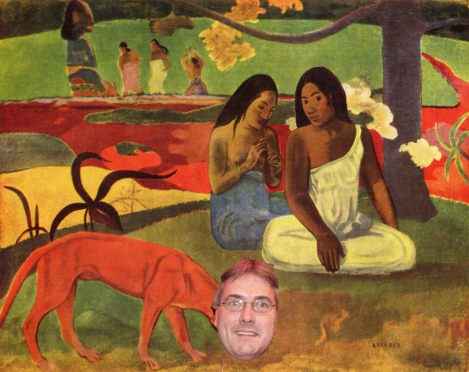 Being got caught creeping on school weans was a new low for Frank.

Someone else was made unemployed in 2011, Ronnie Saez, long time Labour supporter and former head of Glasgow East Regeneration Agency (GERA), one of the many “Arms Length External Organisations” set up by the council.  The GERA was involved in much of the controversial “regeneration” of the East of the City.   Despite his status as an “anti-poverty campaigner”, Saez received a £500,000 payout when he retired, in a move condemned by the Office of the Scottish Charity Regulator as “misconduct” on the Council’s part.  Saez and McAveety briefly went into business together, with notable clients including…Glasgow City Council.

It’s no surprise that a purge at the Council Chambers created an opportunity for Frank McAveety, again. Gordon Matheson was charged with finishing off Labour’s last bout of civil war, expelling a bizarre mix of principled councillors opposed to budget cuts and those believed to be incompetent or worse (e.g. Ruth “where did all the money go?” Black).  This could have opened the door to some fresh meat but sadly, having been discontinued only a year early due to lack of demand, the McAveety pie was reintroduced in 2012, as he again won election to GCC. 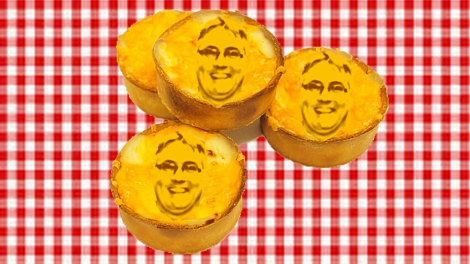 As unsavoury today as it’s always been.

With just 1 day since Matheson’s resignation, perhaps we’re being a tad premature in assuming McAveety will take charge – perhaps we’re overegging the pudding or maybe we’re launching a “pre-emptive strike”, like the kind McAveety cheered on against Iraqis whilst a Holyrood minister.  Perhaps even Glasgow Labour has more sense than to decide this is the person to lead Scotland’s largest local administration.  But perhaps, they don’t even care anymore and why should they?  Being Labour leader at GCC seems like a very fixed term contract; if opinions polls and recent council by-elections are anything to go by, it ends on 4th May 2017.

With nothing left to lose, except the seats they’ll lose anyway, who better to ride the gravy boat at the City Chambers one last time than the pieman of Shettleston himself?  Frank you’re the Weekly Wank(er) McAveety – we may not be oil paintings or school weans but we’ll be eagerly watching you from the public gallery, try not to let the heat get to you, no-one likes a burnt pie.