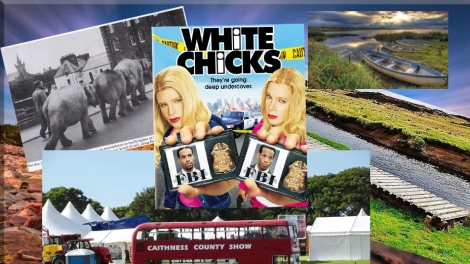 Once again it falls to this blog to bring you yet another installment of the ongoing national riddy that is the enduring popularity of blackface in 21st century Scotland.

You might already have seen the news reports about the three absolute numpties who decided to attend this year’s Wick Gala in blackface and then thought, ‘Hey! Why stop there? Why not go one better and dress up like golliwog dolls?’ Putting to one side the fact that, in the mind of any reasonably intelligent person, at least one very good answer to that question would have immediately and irresistibly presented itself (I mean, did they not Google ‘golliwog’, even for costume ideas?), the thing about these kids is that they are just that: kids. While we might hope to live in a society where teenagers are sufficiently savvy to understand why this was such a terrible, terrible idea, clearly we don’t. And let’s be blunt: growing up in a cosmopolitan melting pot like Wick doesn’t put you at a great advantage in the cultural sensitivity stakes.

What’s more, we all sometimes do stupid or probably even racist things (though admittedly not often that monumentally stupid or that hideously racist); being a good ally/decent person isn’t about always getting it right (thank fuck), but it definitely is about having the good grace and basic decency to admit when you’ve got it wrong and to reflect and educate yourself about the reasons why. So, in the hope that that’s exactly what these three eejits are doing, I say we cut them some slack on this one. However, I’m minded to be less forgiving of the real villains of this tawdry little episode, the admins and an alarmingly large number of the followers of a charming little Facebook page called Caithness Crack.

Caithness Crack, which describes itself as providing curious Facebookers with ‘all the crack & goings on in the county of Caithness’, leapt almost immediately to the defence of the so-called ‘Golly 3’. No sooner had they posted a link to the news story in the Daily Telegraph, disingenuously asking for their followers’ ‘Thoughts on this?’, than it was eyes down for a (very swift) card of White Racist Entitlement and Bogus Victimhood Bingo:

‘Political correctness has taken over the world!’ ‘You can’t do nothing nowadays without some jumped up leftie shouting “racist”!’ ‘Take the MOBO’s, imagine the outcry if there was a MOWO!’ ‘Why should anyone have to tread on eggshells just because someone might be offended over A WORD or a Doll!’ ‘The Dambusters even censors the name of the Dog, for fear of upsetting Black people, who might I add in certain groups use said word frequently as a greeting!’ ‘It’s ok for blacks to dress up as whites yes?’ ‘Are they gonna Investigate the oriental Gaesha girls who paint there faces white?’ ‘We accept other cultures so why don’t they accept ours??’ ‘The real racists are the people who think that this is racist!’ ‘What about White Chicks?” HOUSE!

As if hosting, encouraging and contributing to this outpouring of toxic shit on their page wasn’t bad enough, the fearless admins of Caithness Crack extended their show of ‘solidarity’ with the ‘Golly 3’ even further the next day by changing the page’s profile picture to one of a golliwog doll, just in case any casual observers hadn’t fully got their attempts to paint the people of Caithness as a bunch of timewarp-trapped racist yokels. Later that day they posted a screengrab from the Daily Mail story about the controversy, quoting ‘local resident Lauren Thomas, 23’ sensibly and very moderately describing the costumes as ‘idiotic’ and ‘careless’, under a caption that read: ‘Should be ashamed of herself. The only thing that ruined our gala was you I’m afraid.’ As one of the depressingly few dissenting voices to comment on any of these posts pointed out, this was starting to look a bit like a witch-hunt of the people who’d had the temerity to be offended by all this ‘harmless fun’ – a particularly nasty strategy in a community as small as Wick.

At this point a much-needed reality check was in order and it arrived from, of all places, Police Scotland who announced on the Friday following the gala day that the three individuals in question were facing no charges and that, contrary to Caithness Crack’s accusations of bleeding heart lefties ruining their gala day, no complaints were even lodged on the day. The one complaint that was made to the police came from someone who saw the whole unedifying spectacle unfold on social media. According to the Herald’s report: ‘A Police Scotland spokesman said: “On Monday 27th July 2015, police in Wick received a call from a member of the public seeking to raise awareness of what they deemed as possible inappropriate behaviour at a public event known as the Wick Gala…Suitable advice was provided to the caller. Officers have also been in contact with the charity event organisers to provide advice on guidance for future events of a similar nature.”’ Not exactly the PC Brigade kicking down your front door and dragging you off to a re-education camp, is it?

When it was pointed out to Caithness Crack that this rendered their facile gesture of ‘solidarity’ redundant as well as racist, and that consequently they might want to remove the golliwog doll profile pic from their page (to say nothing of issuing a full apology to Lauren Thomas, whom they baselessly accused of ruining Wick Gala), they remained unrepentant and, at the time of writing, are continuing to trivialise the situation (‘Anyone dressing up for bonfire night? Lol’) and posting more golliwog photos.

They have also seemingly moved on to more big issues of the day, namely a proposed cull of seagulls in Caithness, which you’ll be reassured to hear they are dead against. Because, according to Caithness Crack, gulls should be made to feel welcome in Caithness. Black people though? Maybe not so much.

Selling out and blacking up aren’t worth rewarding

Stirling Uni: There can be no cover up over blacking up