As the old adage goes, giving food to the poor is a Saint-like endeavour. It’s asking why they don’t have any food to begin with that proves more problematic.

It’s been nine years since a quarter of a million people marched through Edinburgh to Make Poverty History, vaguely iterating celeb-fronted demands that the industrialised world do something to tackle poverty and hunger in the Global South. Back then, the story seemed to go, if we all wore white wristbands and listened to what Bob Geldof had to say, we had a chance of eradicating poverty forever.

One decade and a global recession later, poverty has not become history. In fact, its presence feels closer to home than ever. The past few years have seen us become accustomed to hearing about hunger and suffering not as a distant ‘other’ framed by Band Aid and Michael Buerk, but in the helpless ‘other’ of Scotland’s housing schemes and ‘post-hope shitholes’.

Of course, poverty has never been far away, but it’s only recently that there’s been a sense of the public imagination catching up with the idea that people in the UK are not just poor, but are literally going hungry. In step food banks, which have achieved an almost totemic status and have emerged as a mainstay of philanthropic efforts. So while primary schools, supermarkets and workplaces used to be the domain of themed coffee mornings and non-uniform days, raising funds for worthy but ultimately intangible causes, they now collect tins of beans and packets of cereal for people down the road.

There’s many positives to take from this craze of community altruism: it’s clearly great that people care about those nearby who’re going without. There is a direct need here that people are acting to meet, and those giving up their time, effort and money to do so are to be commended. However, there’s another side to the current clamour around food banks that’s been entirely sidelined from any debate. Not least because food banks are frequently attacked from the right, but because the pervading atmosphere around ‘charity’ more generally means that any criticisms of those doing something/anything is verging on sacrilege among the acolytes of the liberal left.

But if we’re in a situation where tax dodging supermarket chains are running food bank drives, where 5 year olds are having fancy dress school lessons on the virtues of them, and where they’ve become the favoured outlet of selfless philanthropy for people who previously thought the height of compassion was RTing bullshit stories about buying McDonalds for ‘the homeless’, at what point do they stop being the exception and become a normal and accepted part of our society?

The reasons why food banks exist are not complex yet, just as with poverty and hunger overseas, are easily lost. Food banks exist because of the Department for Work and Pension’s sanctions regime, which punishes claimants on whatever spurious grounds overworked, target-driven and harassed JCP employees deem appropriate, leaving people without income for at least four weeks, and often many more. Food banks exist because of low pay, rising costs for food, utilities and other necessities,  job insecurity and an intractable social security system where extended delays are the norm. None of these factors are merely incidental, and sanctions in particular are nothing more than destitution by design.

Yet the minute we lose sight of this, the ‘Big Society’ has won. Cameron was widely ridiculed in 2005 when he suggested that volunteers should take over functions of the state, running local libraries and transport services:

There are the things you do because it’s your passion. Things that fire you up in the morning, that drive you, that you truly believe will make a real difference to the country you love, and my great passion is building the big society.

When we now have volunteer-run food banks and donation drives where once we had the welfare state, it’s hard not to see it as anything other than a triumph for Cameron’s vision. This is not to deny there’s a strong tradition on the left of providing for those in need, from the Black Panther’s breakfast clubs to the mass workers’ movement in early 20th century Germany, but I hate to break it to you, the Trussell Trust are not the Black Panthers. They’re not imbued by a sense of class solidarity and mutual aid (even if many donating are, on some level), but classical Christian paternalism. More troublingly, the largest network of food banks in the UK is avowedly ‘apolitical’, whatever that means, meaning that even with their own stats staring them in the face, they jump through hoops to avoid appearing critical of the government. 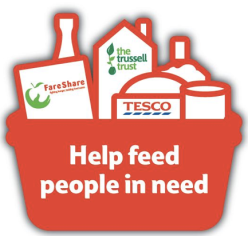 People are going hungry in 21st century Scotland and it’s essential that urgent steps are taken to remedy that here and now. But if we contribute to popularising the view that food banks are anything more than a temporary and inadequate answer, then they may become the permanent one. So while we should keep supporting the vital work that food banks are doing, we need to accept that we’re doing it from a position of powerlessness, and that if we’re not talking about the reasons why they exist, we’ve already lost.

I’m sure readers of this blog are familiar with the causes of poverty in the UK, but the frenzy around food banks has become a broad societal phenomenon, and I have a feeling that primary school classes and workplace collections generally don’t involve discussion of DWP sanctions, in the same manner that the liberal ‘help the poor’ discourse around Red Nose Day rarely features chat about IMF treaties.  In this respect, supporting organisations – like WestGAP or ECAP – which offer advice and support to people on welfare, housing and employment rights can be just as important as donating food.

Tesco launch their new partnership with Anarchists for Smashing Sanctions

The powerful are immensely comfortable with normalising ‘food bank Britain’ with enforced destitution via sanctions and emergency food aid. ASDA and Tesco are unlikely to permit anarchists with pasting tables to start petitioning about sanctions in their car parks any time soon, yet are happy to lap up praise for their regular food bank drives in the same vicinity (In a Kafkaesque twist, these same two supermarkets are strongly rumoured to be among the prime beneficiaries of the government’s proposed “prepaid card” for benefits).

Last weekend I stood in a packed nightclub in the early hours, cheering as the DJ announced how much we’d raised – donations on the door – for a food bank in Glasgow, a latter day Band Aid for hipsters. It was a sizeable sum and a laudable effort, but there was still something about it that didn’t sit quite right with me. Remember when we used to have a social security system worthy of its name? Let’s not forget this, and let’s keep fighting to get it back and make it better. Charity and food banks can’t become the new normal.

Banking of Handouts: Food Poverty in the Big Society

The Positive Case for the UK: Food Banks and Sanctions

5 responses to “We Need to Stop Normalising Food Banks”