It’s a tough time to be a millionaire defending the status quo.  Project Fear seem to be cracking under pressure following  the “crushing” of Alisdair Darling by Alex Salmond. David Cameron was even forced to be jetted all the way to Glasgow to wine and dine the CBI this week, when he’d much rather have been down South negotiating the terms of the next Tory/UKIP coalition.

With call-me-Dave back safely in South Britain, Better Together returned their focus to their one, singular activist, who they’ve been proudly showing off as evidence of how down with the kids they all are.  Then the BIGGEST STORY of the day (or maybe even the whole referendum…based on its prominence on the BBC) unfolded; the single grass root of the No campaign, Jim Murphy, was hit by an egg. 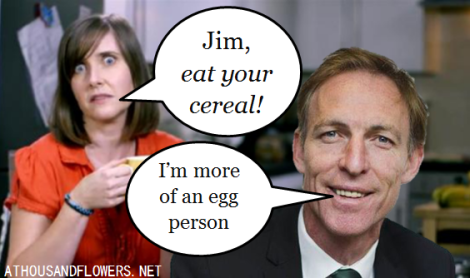 Breakfast: The most important meme of the day

The tradition of lobbing stuff at politicians has a long and storied history.   The usual reaction from the “victim” is mild amusement or in the case of Scottish Lib Dem leader Willie Rennie complete elation, as a tiny bit of paint-filled egg meant for Nick Clegg which hit his jacket got him on the telly for longer than he’s ever been before or since.  Perhaps the most famous poultry-based tale was that which befell John Prescott – or more accurately, that guy he punched in the face for egging him.

Willie Rennie was once on the telly, a while ago.

No such frivolities/fisticuffs for the anti-hero in the MAIN NEWS story of this week.  Instead, Murphy released a riddy statement in which he denounced Yes Scotland chief Exec Blair Jenkins (who as we all know is responsible for the behaviour of every Yes supporter and/or random guy who happens not to like Jim Murphy) and claimed it wasn’t about an egg but mob attacks on democracy and freedom of speech before making a plea for the “attack dogs” to be called off.

A few quick words on the tactical stupidity of deciding now’s the time to militarise the Yes campaign and start knocking lumps out of people – it isnae.  That’s all that needs to be said really.  I doubt the wishing tree brigade could win a fist fight with the Orange Order, so probably best to stick to what we’re good at.  I only wanted to go to the Offie yesterday but decided it best to take off my Yes badge given the huge, militaristic parade that was once again blocking my street.  Who knows what excuse the intimidating No mob were using this week, probably some battle in which some people got a stained shirt or maybe murdered their political opponents in cold blood.

Solving constitutional disputes with violence is condemned by the No camp.  Sometimes.

Back in the hallowed halls of Westminster, the terror threat was raised to “severe”, which we can only assume is to protect Jim, since the Government confessed to having “no evidence” regarding any actual terrorist threat.  This lack of evidence is clearly the compelling case needed to defend the Government’s introduction of a raft of new powers to limit our freedom of assembly, speech, thought and movement while increasing the state’s power to spy on us, take away our citizenship and lock us up.  If you haven’t heard about any of this, it’s probably because so much space has been taken up with MUCH MORE IMPORTANT THINGS, like the fact millionaire Jim Murphy has decided to put his feet up for the weekend while his shirt, and Better Together, enjoy the spin cycle and associated white wash.

Yes campaigners regularly receive death threats (I have a nice one I go back to for lolz when I’m down), have had limbs broken and just yesterday, two thugs from BNP-splinter group and officially registered no campaigners, Britannica, who were in Glasgow handing out No leaflets, kicked a woman in the stomach.  None of these things made the national press, much less would they be deemed the TOP STORY but when your pals run the media, it’s no surprise it’s one rule for Mr. Murphy and another rule for those who’re assaulted on the street by yer actual fascists in the No camp.

So while we’re not rushing to exalt some random guy chucking eggs at this exact moment, we’re just as disinclined to join a moralistic (not to mention slightly late) easter egg hunt which some on all sides seem intent on engaging in.   Who is the mysterious purveyor of poultry products?  Let’s waste the next 18 days hunting him down, so we can prove it’s all a huge unionist conspiracy/was personally directed by Blair Jenkins.   Will the Scottish Justice swing into action when the Proculator Fiscal sends him a sternly worded letter or will we have to wait a year or 2 until he’s handed a £50 fine for this incomprehensible attack on the foundations of our political system? Away and eat your cereal and gies fucking peace. 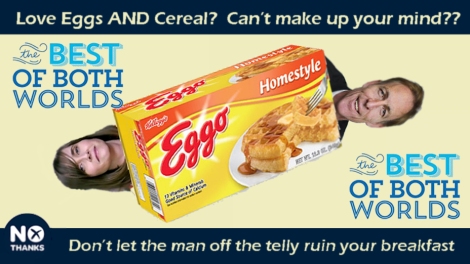 Ordinary people are under no obligation to be nice to our political masters, especially not men like Jim Murphy, who have not just endorsed violence repeatedly but consistently worked to undermine freedom of speech.  As much as anything else, the whole non incident is a gift to a wanker who’s desperately trying to re-invent himself as an action-man of the people.  It’s a joke that’s he’s allowed any airtime to tell his tale of his brave battles with only the entire media, the establishment and who knows how much of the well over a million quid he’s claimed on top of his massive salary while at Westminster at his disposal.   But there’s another tale that needs telling – rather than spending any more time crying over cracked egg, let’s remind ourselves why Jim Murphy is a wankstain on the shirt of Scotland.

Jim has the rare honour of being condemned in Parliament before he was even elected an MP, when he sold out on students as NUS President by supporting Labour’s attack on student grants – against the democratic vote of the student body.  An early day motion in the Commons signed by 17 MPs condemned Murphy’s leadership of the NUS  as “intolerant and dictatorial.”

Having successfully shafted students, he graduated to shafting the rest of us.  In April 2010, he apologised “on behalf on MPs” for the original expenses scandal – with no mention that he’d been forced to pay back some of the £4884 of taxpayer’s money he’d spent on a nice new bathroom, he also played a starring role in the sequel, which was less of a box office hit.  A whole 6 months after his apology, it was revealed he was exploiting a loop hole which allowed him to let one of his houses while simultaneously claiming the cost of the rent from the taxpayer.

An avid opponent of using violence to solve political problems, Murphy played a key role in winning “hearts and minds” during operation Shock and Awe in which he and his Labour cronies bombed fuck out of Iraq, killing thousands of civilians and causing a period of sustained violence and disintegration which continues to this day.  Murphy was a Parliamentary whip at the time, chasing anyone opposed to such mindless violence through the corridors of Westminster to have a “robust argument” about chucking bombs at people.  What’s happening in Iraq is again being used to justify more powers for the state, as the ever lengthening arm of GCHQ reaches further into our lives.

Unlike notorious Scottish Labour hippies like Anas “I want to disarm the world not just Scotchland” Sarwar, Jim’s a keen defender of nuclear weapons and Trident in particular.  We’re not sure how he can reconcile defending something which exists for the sole purpose of unleashing the biggest act of genocidal violence the world has ever seen in the event someone pisses us off with his denunciation of any form of violence or intimidation and since someone’s gone and thrown an egg at him, perhaps we’ll never find out.  Calling on the Yes campaign to disarm seems a bit of a fucking cheek though…

Jim shows off his pacifist credentials

One thing we do know is that if Jim was in charge, there would be none of this pesky “freedom of speech” to be worrying our pretty little heads with. Murphy wants powers to make criticising the armed forces even more illegal than it already is.  What’s billed as being about attacks on soldiers seems more like an attempt to make discussion of non-violence a hate crime.

The biggest riddy of them all is that despite unionist activists being joined in a dog-egg hunt by some from the tin foil nats and despite all the greeting that this is definitely the worse thing that’s ever happened to the Yes campaign (from both sides), Jim Murphy’s wee tour has nothing whatsoever to do with the referendum.

He’s here to show off what a great leader he’d be, either in the event that Dead Ed goes flaccid or when Johann Lamont gets shunted in the not too distant future.  He’s well positioned to be the new plastic patriot of Scottish politics, taking Labour on a much firmer and clearer right-wing trajectory; more austerity and an ever-increasing focus on law and order, the military and flegs (of whichever hue happen to be in fashion).

We should never be ashamed of exposing millionaire Murphy and his poultry pantomime of a Labour leadership bid but let’s also be clear that while chucking pelters is pointless at this precise moment, there is no comparison between the decades of sustained violence and militarism of the British state, which Murphy has so keenly defended, and 1 eggy shirt.

Time to call off the attack dogs: no more Jim Murphys whipping Labour MPs into support for illegal wars, no more assaults on our civil liberties, no more ideologically driven attacks on the poor and the vulnerable.  We have a chance to reject intimidation and threats – about how we won’t get to use the pound, join the EU or cause a nuclear genocide with the missiles which Jim and his pro-union chums love so much.  We also have a chance to get away from a Westminster goose which lays golden eggs for Murphy & Co. while the rest of us are left scrambling for scraps.

Britain must break fast – that’s the only way to make sure this wanker has egg on his face for a long, long time.

Enough of this scary militarism

Vote No or We’ll Shoot