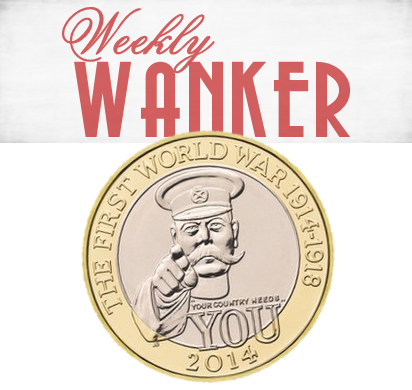 The ‘Blitz Spirit’ is, we’re led to believe, an ingrained part of Britain’s national psyche. We wouldn’t be the country we are without this notion of battling on in the face of adversity, managing our way through crises by drinking tea and keeping calm and carrying on.

Of course, this ‘spirit’, relentless reminders of which are inevitably levelled at anyone who has the temerity to complain that things are completely shit, is never reciprocal.  Struggling to survive due to the DWP’s ideological sanctions regime?  ‘We’re all in it together!’ says the aristocrat wallpaper tycoon and Chancellor George Osborne. Not had any electricity for a week? ‘What on earth has happened to Blitz spirit? #spoiltUK’ tweets millionaire Tory TV presenter Kirstie Allsopp.

This aside, nostalgia for the good old days of World War II is one thing; at least we can agree that objectively it was a worthwhile endeavour, fought as it was against ‘yer actual fucking Hitler’. Brace yourselves, however, for this year – if not the next five – look set to see Britain (England) plumb new depths in its obsession with its own ‘Two World Wars and One World Cup’ view of modern history.  Let’s hear it for World War One everybody!

2014 marks the centenary of the start of the First World War. Now, you may think there isn’t much to celebrate about the beginning of a conflict which saw millions of young men who didn’t have the vote march off to face industrial scale slaughter in the name of competing imperialisms or opposing German expansionism or ‘democracy’ or any number of complicated but ultimately futile reasons. The UK government, it seems, has different ideas, going by the details which are beginning to emerge on how they plan for the country to ‘commemorate’ the start of the conflict. Announcing this a couple of years ago, David Cameron said it would be similar to the Diamond Jubilee celebrations, with events that “capture our national spirit in every corner of our country, something…  about who we are as a people”. From what I remember, the Diamond Jubilee mostly involved the awful Kay Burley jumping about on Sky News telling us about how much fun she was having (even in the rain, hohoho!) and a smarming Gary Barlow, which probably sums up the fucking wretched state of the UK in late capitalism pretty well actually. So hopes are naturally high for this year’s WWI jamboree,  the details of which are now starting to come to light. Last week saw the Royal Mint finalise plans for their commemorative £2 coin (as pictured above), a moving tribute to er… Lord Kitchener!

As war minister, Kitchener was the man who oversaw the mass recruitment effort, from which of course millions would never return. Indeed, these days he’s mostly recognised as the man who wants YOU, Britons, to sign up for your country’s army, which is a shame really as he has many other great achievements to his name, like inventing concentration camps.

Before you could even say ‘what a grossly offensive and short-sighted way to commemorate one of the worst episodes of the 20th century’, in stepped Thinking Man’s Cabinet Minister Michael Gove to offer his ‘two cents’ with a brash Daily Mail op-ed on the paper’s pet subject… “The Left” are ruining Britain!

So what were the dastardly “The Left” up to now? It turns out they (along with Blackadder, Wilfred Owen and the bulk of academics from across the political spectrum) have embarked on a century long lie to convince everyone that the First World War was a needless slaughter overseen by an uncaring cadre of public schoolboys shouting orders at poor people and shooting anyone who dissented. The reality, according to Gove, was that it was a noble and just cause, whose willing participants may have had a horrible time but they were ‘conscious believers in King and Country, committed to defending the western liberal order’. It’s a funny idea of what the ‘western liberal order’ constituted at a time when the European powers were busy overseeing genocide in much of the rest of the world. As Seamus Milne points out in a lucid piece in the Guardian, Britain entered WWI to defend the territorial integrity of “plucky little Belgium”, a nation which had in its recent past been responsible for the deaths of some 10m Congolese from “forced labour and mass murder”.

The revisionist dogma being spewed by senior Tories like Cameron, Gove and Boris Johnson (who used his regular Telegraph column to bang on about how it was all Germany’s fault) is an attempt to reinvent WWI to suit their own worldview. It’s  in much the same way that Remembrance Day/Poppymania has been hijacked by crude nationalism, with the line between it and Gordon Brown’s ‘Armed Forces Day’, Help for Heroes and the Military Wives’ Choir becoming so blurred that all are now just a mush of Union Jacks, jingoism and supporting our brave boys, propping up the notion that all of Britain’s military endeavours are somehow ‘just’. So rather than being remembered as a war criminal who invented concentration camps and  lured millions of young men to their deaths, Lord Kitchener is now the face of Britain’s heroic World War I efforts. The counter-offensive starts here: Lord Kitchener was a wanker.

Interestingly enough, Glasgow is set to be “the focus” of Britain’s WWI commemorations,  hosting a major church service this August that the Queen’s expected to attend. Far be it for us to suggest that there’s anything untoward about it, the date of this falls just short of a month before the independence referendum. Unionist politicians never tire of telling us how much we’ve ‘achieved together’ – which usually amounts to ‘we won WWII and weren’t the Olympics nice?’ – and all signs are we’re about to start having constant reminders of how fucking great the First World War was shoved down our throats too. The truth is that Glasgow (as were England, Germany, Ireland, Russia…) was riven by class conflict throughout the 1914-18 war, destroying the right’s fantasy notion of everyone coming together in a mythical ‘national interest’, the same tired Keep Calm/Blitz Spirit bullshit. It would be a much more fitting legacy to remember those who resisted the inhumane madness of the war, the women who battled against overcrowding and rent rises at home, those who mutinied against their officers and those who were jailed, and worse, for refusing to fight. And by all means, we should remember the brutal nature of the war, the needless slaughter as millions of young men were marched over the top to certain death, whether they were conscious believers in the cause or not. That should be the real legacy of WWI, but it’s unlikely we’ll see it on a £2.00 coin any time soon.

Selective Remembrance & The Problem With Poppymania

Enough Of This Scary Militarism

Vote No Or We’ll Shoot: Hammond’s Military Intervention in Scotland