Since the 1970s, the third page of Britain’s most circulated daily newspaper has featured a woman in nothing but her pants, accompanied by some choice pieces of political and current affairs ‘insight’ from the day’s model. It’s a bit of national joke really, synonymous (albeit in a somewhat classist vein) with the dashboard of the builder’s van and girls called Charlene from Merseyside. Yet page three and The Sun has a daily circulation of 2.5 million and is estimated as being seen by 7.5 million every day, numbers which aren’t particularly funny to the increasing number of protesters who wish to see an end to daily soft porn from Britain’s best known rag.

When a couple of weeks ago Green MP Caroline Lucas stood to speak to a debate on media sexism at Westminster, she was interrupted by a Labour member demanding that she put her jacket back on over her t-shirt in a triumphant display of the sort of ruler-stickling which the nerdy hacks and professional politicians of Westminster just get particularly hard for when they’re playing big boy games at the big boy’s house. The offending t-shirt was one from the No More Page Three campaign launched last summer by writer Lucy Holmes after opening a copy of The Sun during the Olympics to find that although Jessica Ennis had just stormed to Gold, the biggest picture of any woman in The Sun was the one with her tits out.

Since its inception, No More Page 3 has received a sizeable chunk of media attention – the petition is racking up numbers daily and the campaign has earned a hefty Twitter presence, as well as the support of some fairly A-list celebrities and political pundits. It has also permeated a score of universities with several student unions, including those at Edinburgh, Dundee and Stirling, voting to boycott The Sun until it ceases to publish Page 3. In February, many argued that the campaign was particularly timely in light of The Sun’s wise choice to report the murder of Oscar Pistorius’ partner Reeva Steenkamp with a giant picture of her in a bikini on their front page, sexualising and using her as titillation before her body was even cold. However, despite a busy eleven months, so far the campaign has, unsurprisingly, elicited very little response from The Sun, bar Murdoch’s clearly tokenistic suggestion that Page Three girls might be replaced by “glamourous fashionistas” at some unspecified point in the future. 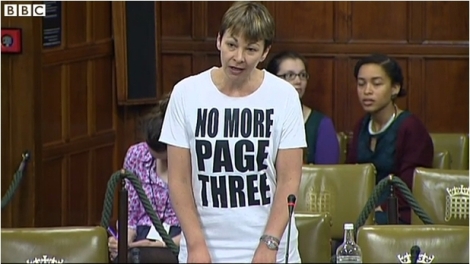 When Lucas made her speech, she made it to almost an empty room. It looks as though there was a grand total of about ten people there. Unsurprisingly, it seems that there is little to no appetite for change or action on Page Three at Westminster or Whitehall. When the subject was broached with Cameron on ITN News in April he suggested just “turn the page” if it offends and in response to the recent debate, Ed Vaizey dismissed the issue away with some half-arsed references to freedom of the press and free expression, even though NMP3 aren’t calling for a legislative response. Vaizey defended Page Three on the basis that it is the right of adults to choose what they read, so long as that remains within the law. A cynic might speculate that this is because it involves the Murdochs but either way, the UK Government have refused to take a stance.

The problem with neo-liberal rights-talk is that whilst everyone’s so busy making sure that they’re seemingly respecting the rights and choices of citizens and avoiding the nanny-state, everyone forgets to actually have a conversation about what rights and choices really mean – both in terms of their content and their execution. This is what the era of ‘liberal individualism’ and society/community apathy has given us – a mainstream understanding of rights from a capitalistic sense of ‘justice’ where state intervention always equals bad, and individual freedom of choice always and unequivocally equals good.

I find this sort of rights narrative to be incredibly oppressive and most certainly patriarchal. It favours those for whom choice and citizenship are natural and easily accessed, not those who have to struggle for recognition, for equality, for their voices and experiences to be heard. Its alliance with neoliberalism is not accidental – it benefits those who are educated, wealthy and who are able to advocate for themselves. In what Day (1979) calls the “fiction of non-directiveness”, we are taught that the role of the state is always and unequivocally to respect the self-determination of individuals. Decision-making on matters which are deemed to be of moral concern is a complex grey area. Yet, it seems clear to me that promoting the wellbeing of individuals and a civilized society cannot be achieved through what is essentially a mechanistic approach to ethical decision-making on what should or should be the responsibility of the state.

Second-wave feminism saw a burst of new activity in the area of ethics and moral decision-making and it is through this lens that I think NMP3 might be best examined and supported. Feminist care ethics present an alternative to the deontological and utilitarian neoliberal consensus routed in abstract principles of freedom and autonomy. Gilligan (1982) argues that moral decisions should be made through contextual understanding fostered through emotional engagement, rather than blind default adherence to a clinical protection of negative ‘rights’ and freedoms. Instead empathy, responsiveness, sensitivity and sympathy all need to be cultivated and context, histories and patterns considered in order to be able to look past objective ‘rationality’ and to conceive of what ‘morality’ truly recommends (Held, 2005).

Essentially, this means actually examining the issue of Page Three on a truly human level – who’s ‘rights’ and interests are served by Page Three and what does Page Three actually *mean* for women and broader society? I think the evidence is pretty clear:

(Object – Joining Up the Dots and Lose The Lads Mags)

The evidence is overwhelming – media sexual objectification of women has a profound and truly damaging effect on women and the attitudes of men towards women. This isn’t sex-positive, this isn’t ‘empowering’ – this is harmful. Page Three is absolutely complicit in this – not only does it portray women as nothing more than sex objects but it also belittles and mocks them in the process. To excuse Page Three on a neoliberal ‘rights’ basis only serves the sexual gratification of men, to the detriment of the respect, equality and safety of women.

A civilized society does not ignore this – in the same way that it wouldn’t ignore material which fuels racism or homophobia. In my mind, a civilized society is one which takes a stance on issues which are clearly evidenced as being disproportionately harmful to its citizens, even if that means treading on the toes of self-determination. It is a society and which looks at issues of ethical decision-making in context and with reference to the voices of those who are oppressed, harmed, or objectified. 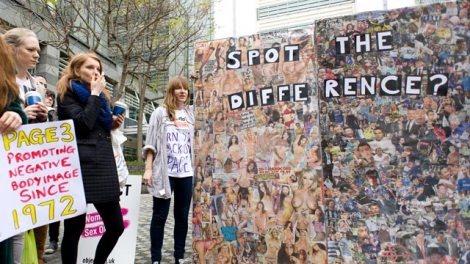 There are many who will read this and whilst agree with my assertions about the need for Government and society to take an active stance against the sexual objectification of women, may disagree with my suggestion that the prominence of the NMP3 campaign is useful and relevant in the face of the abundance of readily available online – pornography which is violent, degrading and misogynist and which consigns female sexuality and enjoyment to a footnote.

I understand that, absolutely. I consider myself to be a progressive, leftist feminist and I am extremely wary of the liberal Guardianistas who typically throw themselves behind campaigns such as NMP3. Liberal politics and liberal feminism doesn’t dig deep enough – it often ignores intersectionalities, it is fuzzy on issues of class, and tends to only applaud female sexuality of the Birgitte Nyborg variety. I dislike that too but I still believe that the widespread prominence of the NMP3 campaign is important.

Despite its liberal tendencies, the campaign has opened up the issue to a broader audience, beyond that of the feminist movement and allies. It has raised a consciousness about what Page Three means for women, for children, for the attitudes that it breeds in men. That can’t but be a good thing. Page Three might not even in the same ballpark as some of what is readily available online but it is all part of a broader picture.

By putting pornographic, belittling material on the pages of a daily newspaper for sale in every corner shop The Sun normalises sexual objectification. It tells men (and women) that to see women as sex toys and little else is ok, and that the prime reason for female existence is to sexual ingratiate men.  This intertwines inextricably with harder material – it helps introduce the idea that porn which focuses purely on male satisfaction is normal, desirable and acceptable. It doesn’t matter if you think that Page Three doesn’t have any effect on how you view and think about women – it might not seem to, but the widespread acceptance of material like this permeates social norms on deeper, more subconscious level.

Purely on the normalisation ticket, I support the NMP3 campaign. However, I do think it could do far more. They need to be more radical and less wishy-washy liberal. They’re too nice, too appeasing, too keen to stick with the “how is this family friendly?” narrative, too bothered about giving The Independent a good story with which to appeal to the middle classes. NMP3 needs more activism, more aggression, bite, and a drive to move to a stage where it takes the attention it’s grabbed and uses this to coherently demonstrate the link between Page Three and the broader issues of gender inequality, misogyny and violence. Page Three might seem more ‘symbolic’ than active in terms of harmful sexual objectification, but symbolism often plays an active part in facilitating darker realities.

[i] Redgrave, K. & Limmer, M., (2005) ‘It makes you more up for it’: School aged young people’s perspectives on alcohol and sexual health Rochdale Teenage Pregnancy Strategy

2 responses to “What’s in a pair of tits? The case for the pishy liberal ‘No More Page 3’ campaign”