Where most people see a crisis, some will always see an opportunity. As Naomi Klein has set out, this has given rise to the concept of ‘disaster capitalism’, where even the most horrifying of circumstanes – manmade or otherwise – can be exploited and, amid the confusion, unpopular policies pushed through and the future reshaped.

And so to Sauchiehall Street, where the same property developer who was twice refused permission for controversial student flat proposals is now seeking to raze the fire ravaged ABC venue. The popular music venue and nightclub, a category C listed former cinema, was badly damaged during the fire which ripped through the Glasgow School of Art Mackintosh building last June. The building has been boarded up since then, although the street directly below has been reopened.

The ABC, in happier times

The ABC sits beside the large brick building that, now vacant, used to house Jumpin’ Jaks nightclub and a Yates pub – the whole block is under the same ownership.  That building was the subject of a long running battle over a seven-storey block of student flats, which ended in December 2017. After initially being turned down by Glasgow City Council, the developer appealed to the Scottish Government. They too rejected the scheme, judging it would be “detrimental to the historic environment”, being directly in front of the Art School’s celebrated Mack building, at the time undergoing renovation after an earlier fire in 2014.

The company behind that plan was KNYSNA (NI) LIMITED. The firm which has submitted proposals to demolish the ABC is OBARCS NO. 1 LLP. Both are ultimately owned by Northern Irish mayonnaise magnate and self-described “shooting, fishing, outdoorsy Granda” Trevor Kells. As we first revealed last year, Kells has also bought out the STUC headquarters on Woodlands Road, which will soon become more student flats in the form of “Glasgow Unilofts”. 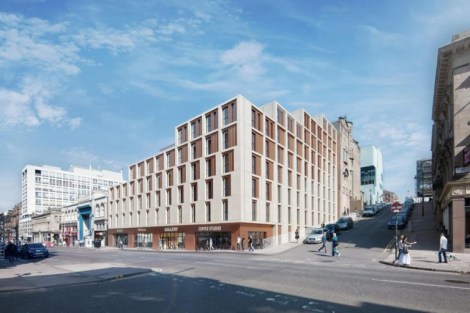 The rejected Sauchiehall St scheme, by the same developer

Since their failure to gain planning for the Jumpin Jak’s block, no further proposals have been submitted for the site. However, the company are now battling to demolish the ABC, which they say they intend to “bring back to life as a world class music venue”. Nonetheless, no plans have yet been fleshed out for what this venue would look like – the current application relates solely to securing listed building consent for demolition. Now under consideration by Glasgow City Council, it has aroused furious opposition from local residents, politicians and heritage bodies.

The all too frequently toothless Historic Environment Scotland chipped in to say that, “It is our view that the applicant has not made an adequate effort to retain and preserve this C-listed building (or any part of it), and has therefore not met the tests for demolition”. Garnethill Community Council have said it would “devastating and totally unacceptable” to lose the building. Omnipresent heritage fan and MP Paul Sweeney pointed out in his objection that the building hosted Glasgow’s first ever public film showing, in 1896.

Glasgow School of Art have also objected to the demolition, pointing out that there are currently no plans for the site’s redevelopment and that the ABC building, with temporary props, is under no imminent danger of collapse. Conveniently, their letter also reiterates that student flat plans for the neighbouring building have been rejected several times and that the ABC’s facade is an effective and important part of the streetscape. We can, perhaps, read between the lines here.

A dispute over the structural integrity of the ABC building is central to what happens next. The developer maintains that the building is beyond repair, unsafe, and needs to be flattened. Glasgow City Council’s Building Control – who have permitted the reopening of the street directly below the boarded up facade – are, however, satisfied that the building is secure for the moment. Historic Envronment Scotland have stated that while the roof has been gutted, the main areas of architectural and historic interest – namely the front facade, entrace foyer, and auditorium walls, are largely intact and capable of repair.

A decision will now be made by council planners. If the owners are granted permission to flatten the ABC, how long will it be before the student flat proposals for the neighbouring block emerge out of the ashes? 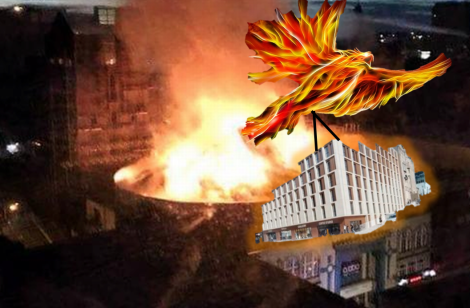 STUC Head Office to be Converted to Private Student Flats