It’s a minor miracle that we’ve got to over seventy Weekly Wankers without ever featuring First Bus before. Because everybody hates the change-refusing, price gouging, route scrapping, scab recruiting transport cartel whose mere act of existence makes all the arguments for a publicly owned bus network that we ever need.

Earlier this year the company hit the headlines after hiking some fares in Glasgow, where they have a monopoly on most routes, by 40%. A huge public outcry forced some minor concessions from the company, but the basic point remained: Scotland’s private bus companies – from the routes they serve to the fares they charge – are entirely unregulated and can do whatever they like. And so it is that every year, as the firm axes routes and announces inflation busting price rises, that we face the unedifying spectacle of politicians pleading with a corporate giant over the running of a vital public service that we have no say over.

First Bus operate internationally – including owning the famous Greyhound Buses in the US – but are headquartered in Aberdeen. It is maybe not a coincidence, then, that the firm is using the city as a testing ground for a severe attack on its drivers’ wages and conditions.

Bus workers in trade union Unite began strike action last week to defend their conditions, with 95% of members backing the action on an 85% turnout. First want to implement new contracts which will see cuts to holiday pay and overtime, an end to paid breaks and a 30% reduction in sick pay. With no resolution, drivers have launched into seven days of strike action this week, and there could be a further four weeks of strikes.

If you’ve been watching Netflix’s honest farmers versus corporate America shoot-em-up western series Damnation recently (you should, it’s good) – you’ll be familiar with the idea of mean-spirited strikebreakers being drafted in to bust industrial action. The response of First Group to their employees trying to stand up for their working conditions has been in a similar vein.

Today, it emerged that First – who reported profits of over £200m last year – have bussed in 60 drivers from England to break the strike. The scab labour is “being put up at the Aberdeen Douglas hotel on Market Street and given a £25 a day meal allowance”, according to the Press and Journal. Scottish Corbynite news site Red Robin has reported that Unite worked hard to “ensure that no drivers from Scotland” would go in to break the strike, forcing the company to look elsewhere.

First Aberdeen’s manager, Andrew Jarvis, shamelessly told the P&J that they have “welcomed drivers from other First Bus businesses who have travelled from our sister companies across the UK to assist us in keeping the network operational. These colleagues have been paid for travel, training and time worked for providing this cover.”

The move likely has health and safety implications, with drivers unfamiliar with Aberdeen roads and routes and stops covering the city. Unite have described it as a “measure of desperation” that big pay-outs are being offered for drivers from elsewhere to break the strike. But it also points to the strength of the local walk-out. 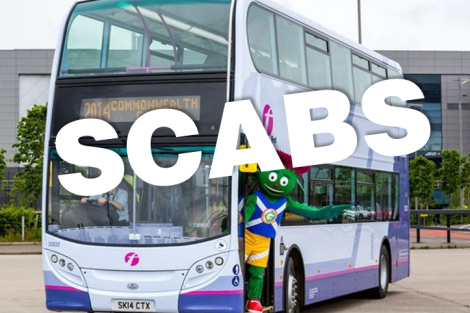 Bringing in scab labour is the worst response possible to the strike by First and for all the company’s talk of wanting to get back round the table with the union, graphically illustrates their attitude to the action. They are out to beat the workforce and if they do, First’s drivers across the country can presumably expect similar attacks on their conditions. Little wonder, then, that Unite have reportedly ploughed millions into its strike fund for the must-win dispute.

The proposed changes to T+Cs cuts to the heart of the problems with Scotland’s privatised bus network, where cowboy operators are allowed to treat their workers and passengers in equal contempt. Not unrelately, the number of bus passengers across the country is in freefall, down 10% over the last five years, despite the vital role buses have to play in combating climate change, congestion and inner city pollution.

The Scottish Government’s new transport bill is, we are promised, going to “provide local transport authorities with a viable and flexible set of options to influence the provision of bus services in their area to better meet local users’ needs”. If, as expected, this contains provision for local councils to set up their own bus companies, on the model used by council-owned Lothian Buses, then that is welcome. But it doesn’t go nearly far enough – the wholesale re-regulation and democratic control over Scotland’s runaway bus services is long overdue. In the meantime, we are stuck with Worst Bus, Weekly Wankers #076. 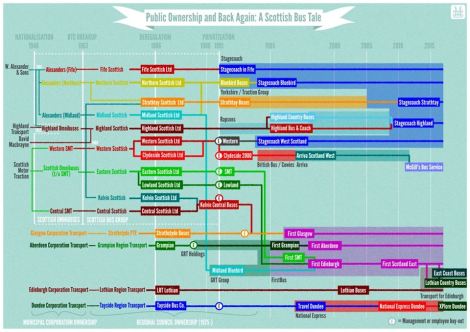 It’s Official: Glasgow’s Buses Are Failing, But Fares Go Up Again This Weekend