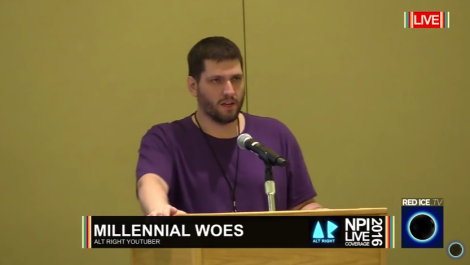 A Scottish Youtuber with a growing fanbase in fascist “alt-right” circles was a keynote speaker at the white nationalist conference in Washington DC, that since Saturday has become the focus of an international media storm. Footage of hundreds of attendees at Saturday’s annual conference of the National Policy Institute raising straight handed salutes, as alt-right leader Richard Spencer commands them to “Heil Trump”, has been beamed around the world.

This blog can now reveal that an Edinburgh based vlogger was one of the main draws at the conference. Since late 2013, self-styled “Millennial Woes” has posted hundreds of videos to his Youtube account, racking up 18,000 subscribers and nearly 2.4 million views. Milliennial Woes – who keeps his real identity secret – claims to earn a living from his Youtube channel and regularly asks his followers for donations.

He flew out to the US from Edinburgh Airport two weeks ago and has since travelled across the country, addressing meetings and providing regular video despatches to his followers. This culminated in his arrival in Washington DC, where he joined a panel of other leading white supremacists including Spencer. 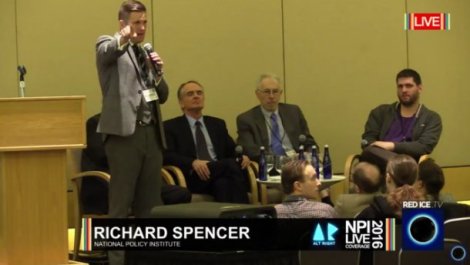 In September of this year, the vlogger also addressed the inaugural conference of the Dutch alt-right in Rotterdam. His speeches and Youtube videos are barely worth quoting. He speaks calmly and at great length, barely ever raising his voice – let alone going full Alex Jones.

Watching more than about 40 seconds of his face requires enormous stamina, as he vomits out a whiny shitfest of victim blaming, misogyny, white supremacy and social darwinism. It’s barely comprehensible as it is, but his tendency to slip into the arcane jargon of the alt-right – all white genocide, cucks, globalists and SJWs – makes it even less so. He even has a two part guide to finding a “traditional wife” and an obsession with bestiality that is probably considered weird even by alt-right standards.

Given the online nature of his movement – and indeed, his source of income – Millennial Woes spends most of his time networking with other alt-righters on Google Hangouts and Youtube. His name is presumably an ironic reference to whatever he perceives as millennial “woe is me” victim culture, which he no doubt thinks is really funny. In fact, it couldn’t be more appropriate: he is the whiniest, smuggest, most self-obsessed creep I have ever come across on the internet.

The vlogger’s route into being a leading alt right figure is not entirely clear. He previously flirted with UKIP, attending Nigel Farage’s “save the union” speech in Glasgow just ahead of the indyref in September 2014, posting a 40 minute video complaining about the “ordeal of the leftist protest” outside it afterwards.

Millennial Woes – who is clearly terrified of being exposed, given the lengths he goes to to conceal his real name – is a living example of the far right radicalisation of educated young white men on the internet, what has been dubbed the “intellectualisation of hatred“. He is living proof that no matter what we would like to think, Scotland is not immune to this phenomenon; in fact, we have one of its leading proponents living in our capital city.

Do you recognise Millennial Woes? Any tips to athousandflowersblog@gmail.com

This Autumn, Neo-Nazis Held a Training Camp in Scotland

Blurred Lines: Roosh V and the Shadow of Scotland’s Misogyny