TECHNICAL  NOTE: WE HAVE NO TECHNOLOGY.

[Our basic WordPress doesn’t extend to an actual live blog, so feel free to press F5 occasionally, and there may or may not be anything new]

Scotland’s votes never matter at Westminster and tonight was no different, we have a Tory Government with no mandate, still.

We’re claiming a landslide for A Thousand Flowers.  Thank you for joining us – now get some sleep before the mutiny. 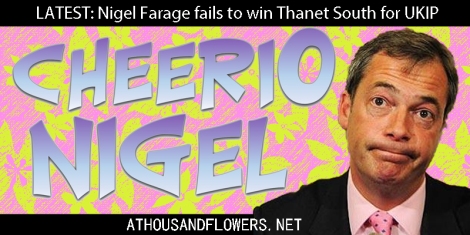 10:04: If every single Scottish seat was Labour, David Cameron would still be walking into Downing Street this morning.  The message to Scotland is, as usual, #voteanyonegettories

09:53: The Queen was “greatly exorcised during the referendum.”  Or “purring” as it’s known to the commoners.

09:41: Milibandwaggon wheels to be taken off imminently.

09:28: “At the end of the day, what we have is a United Kingdom.”  Ian Duncan Smith is clearly hallucinating due to lack of sleep.  A situation we sympathise with.

09:18: Miliband already being tipped to stand down.

09:14: Labour playing the “media were all against us” card works less well in Scotland, as do Labour generally.

09:10: “We’re expecting Ed Miliband to say something”…and have been for the entire campaign.

08:59: Even the BBC has given up but despite being sidetracked by Facebook arguments, we’re powering through.

08:38: Cameron to meet Betty at noon to be anointed as leader of the United Kingdom.

08:35: Kevin McKenna makes a fine point, Holyrood would genuinely be better if Scottish Labour decided to bother with it, although whether defeated careerists are the best people to take up a safe Labour listie, we’re not sure.

08:29: Nicola Sturgeon: “People have voted overwhelming for Scotland’s voice to be heard and for the end of austerity.”

08:28: Nick Clegg’s “heights” were apparently those TV debates i.e. that brief period when people said he was quite nice but didn’t actually vote for him.

08:12: Kipper Mark Reckless loses Rochester & Strood back to the Tories.  Remember when UKIP were supposed to be the story of the election?

08:03: We know Nigel Farage will lose and be forced to resign but again, he will not stay up later than us.

08:00: The Tories are rapidly approaching the finishing line.  First Past the Post hides the fact they’re rising again in Scotland.

07:42: Caroline Lucas wins by nearly 8,000 votes in Brighton Pavilion.  The Green surge has been strong but not nearly strong enough to beat First Past the Post anywhere else.

07:19: And congratulations to Humza Yousaf for winning the #SNPout competition, with this smokin’ piece of poutage.

07:15: Congratulations to those behind the hashtag #SNPout for capturing the mood of the nation so well.

07:05: “I’d like to say the police are nothing but an arm of the bourgeoisie”  is a phrase we’ve yet to hear from any candidate.  So many thanks, so few attempts to accurately contextualise the role of the police under capitalist tyranny.  Although maybe George Osbourne wasn’t the most likely person to deliver that message.

06:58: And also the seat which resulted in the best officious letter of the campaign:

06:52: We should point out that the one seat yet to declare, has quite literally the greatest candidate in all the world standing as an independent, Jesse Rae. Yes, that guy with the Claymore who made P-Funk tunes in the 80s.  Legend.

06:41: How long before someone says, “Bring back Johann Lamont”?

06:37: Completely ignoring the last thing we said…IF the projections are correct, then shock horror, Scotland’s vote will have made no fucking difference whatsoever to the overall result and Labour were just too shit to win.

06:25: Fully aware that the swing suggests a Tory victory but when Labour are still actually winning, why the fuck are the media declaring Cameron the winner?

06:23: South Thanet yet to declare.  We will stay up later than Nigel Farage, he’s not outdoing us.

06:10: Danny Alexander talking about “the flame of Highland liberalism”, which appears to have burnt out.

06:00: Carolyn Leckie wins at piss taking by describing the Unionist MPs as a “troika of Pandas.”

05:50: We missed Weekly Wanker Brian Donohoe being voted out.  We don’t think it was on the telly.  Donowho??

05:47: Cameron claims the “One Nation” mantle….but which one will he chose?

05:37: Time to repeat the fact that the Tories have no mandate, again.  We call mutiny, again.

05:34: David Mundell just claimed someone (we’re not sure who) had “no mandate.”  Presumably he means Tories trying to run Scotland.

05:30: We may have to spend most of our adult lives finding out why we hate the newly elected SNP MPs but our childhood baddies have been defeated tonight, so yes, we’re fucking ecstatic.

05:20: “Ed Miliband will be relieved the nationalists aren’t standing in Doncaster North.”

04:56: The Mundell holds Dumfriesshire.  Fans of the chant, “there’s only one Scottish Tory” are safe. For now.

04:53: Nick Clegg thanks ALL the emergency services.  Doubtless, mountain rescue have played a key role in his victory.

04:50: “The party of the working class” now have Edinburgh South.

04:35: English & Scottish politics are exactly the same.  As this picture demonstrates.

04:20: Labour’s Anne Begg, who joined the leader of the National Front in this lovely referendum pic, has lost Aberdeen South to the SNP.

04:18: We missed the vital news that Ian Davidson called for Jim Murphy to resign….

04:15: Shock result of the evening as Alex Salmond undermines democracy by standing for and winning a seat.

03:47: The SNP quite literally BREAK THE SWINGOMETER in Glasgow North East, it would have been been 39%, if it wasn’t so big it covered up the numbers.

03:45: 2% for our wee pal, UKIP’s pro-fascist candidate Scott Cairns in Coatbridge.  Another £500 of wasted kipper money.

03:37: “The wounded” have bayoneted Ian Davidson in Glasgow South West.

03:32:  Jackie Bird has returned to her role as being the one who mysteriously peers out from the back of BBC broadcasts. 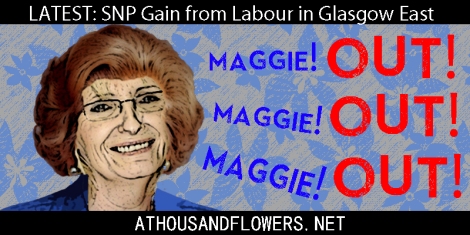 03:18: “A hundred years from now, we’ll still be around.” Jim Murphy needs to learn when to stop lying. 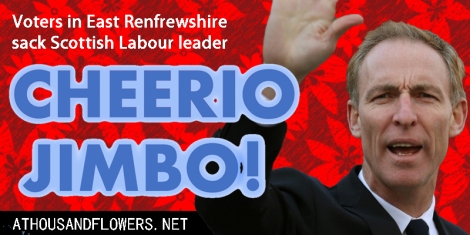 03:03: Equal Marriage roaster Iain McKenzie shat it there as presiding officer said “one thousand” instead of “thirteen thousand” by mistake.

02:57: Cannabis is safer than the Trade Union & Socialist Coalition in Paisley and Renfrewshire North. 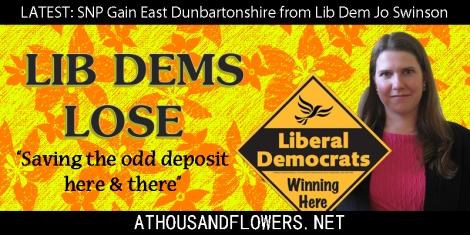 02:42: Frank Roy gone in Motherwell & Wishaw, Nats also take East Kilbride.  We might be easier just telling you what the Nats haven’t won, which is nothing so far.

02:40: Glasgow Labour now hiding at the lobby in the count 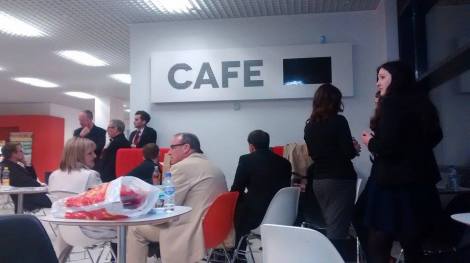 02:39: TUSC candidate in Dundee trying to sell Stewart Hosie a copy of the Socialist Worker!!

02:24: SNP supporters in Glasgow chanting “all the seats” as Paisley results announced.  A 33% swing to the SNP. 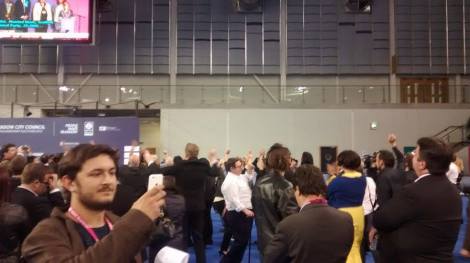 02:11: First result of the night in Scotland.  SNP gain from Labour in Kilmarnock and Loudoun.  Huge turnout, massive swing.

@bugmenot44 @jimmurphymp I don't believe the SNP will take a single seat from Labour in 2015. You'll get good odds on that.

02:06: Nicola Sturgeon & A Thousand Flowers both arriving at the Glasgow count!

02:00: Yet more images of Douglas Alexander & Mhairi Black staring at pictures of willies and swastikas on ballot papers.

01:49: Wee Dougie looks like he’s shiting himself, in fairness, so does Mhairi Black.

01:35: Michael McCann tells Catriona Renton, “I don’t need to talk to you, I’m not a politician any more.”

01:33: STV reporting Scottish Labour have conceded defeat in ALL Glasgow seats.  We’d rather wait and gloat when it actually happens.

01:29: Exclusive first sighting of Sturgeon arriving at the count in the natcopter: 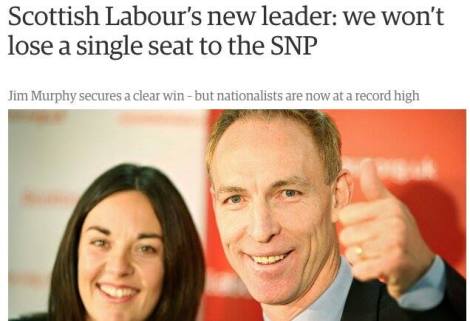 01:21: Word on the street is that Gordon Matheson has LEFT the Glasgow count.  We’ll definitely go and check.

01:14: Lib Dems Tooting away more cash as they lose another deposit.

01:08: Michael McCann has deleted his Twitter.  A great loss we’re sure.

01:04: Brace yourself for whiney Labour arseholes bemoaning the fact the entire country has fallen to nationalism.

00:58: BBC showing live pictures of people eating, instead of counting the fucking votes so we can have something to talk about.

00:37: Before any Nats get too comfortable, we’d like to remind you that Gordon Wilson is a total wankstain.

00:36: Rumours there are lots of Yes votes in the Murphy pile.  We knew they’d turn up.

00:33: Still only 3 seats announced.  We currently live in a Labour One Party State. 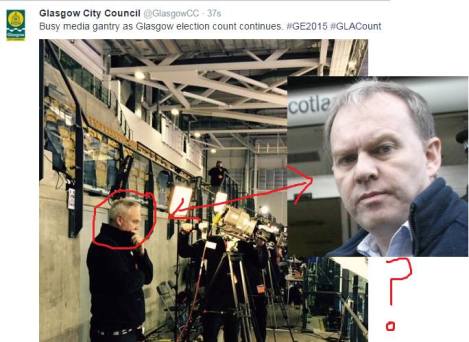 00:08: We’re gutted not to be a voter in South Lanarkshire or have visited the dentist recently.  No stickers for us. 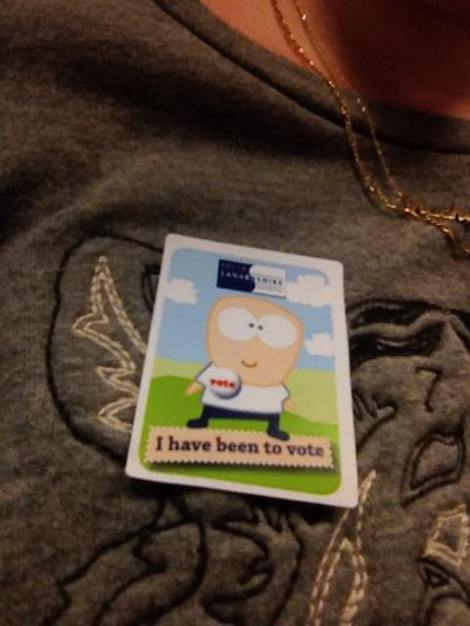 00:03: Apparently, a tablet was found in a ballot box in Aberdeen.  Someone’s buzzin at the count.

23:49: Only 3 seats declared and already the Lib Dems have lost a grand and a half.

23:45: In other news, there are lots of other rumours we’ve yet to speculate on.  Let’s just say the Greens are beating Murphy & Al Murray looks to take South Thanet.  More on what people are making up as they do.

23:42: Speaking of Paul Mason, he’s just reported that Glasgow North East, the “safest Labour leader seat” is looking good for the SNP.  Is this the end of the People’s Willie??? [Bain]

23:35: Rumour has it the SNP have won the postal vote in Rutherglen and Hamilton West.  Ruth Davidson’s at the BBC.  Coincidence???

23:34: Weighing up sending someone to the count in Glasgow, purely to take pictures of Labour looking sad.

23:31: Odd that the BBC seem to be suggesting the SNP will win Falkirk.  Scotland’s sooth sayer David Coburn called that for UKIP, we believe.

23:23: Sorry, I’ve been smoking & making this.  There are no results except Sunderland, where Labour win, still.

22:54 Since we’ve had 1 whole result, it’s time to call for a mutiny in the event the Tories can’t form a majority Government.  Might as well get that in early.

22:51: It’s that part of the night when all the safe, urban Labour seat gets called.  Greens beat the Lib Dems into last place in Sunderland South.

22:49: Most of the people on the BBC look like there in the wrong aspect ratio.

22:46: Wee cameo from John Swinney there, Deputy Headmaster of Scotland.

22:44: Not surprisingly, the top of the wanted list are the Scottish Labour MPs who went to Westminster in an attempt to stop Equal Marriage in England & Wales.  #YESHOMO

22:36: Exit polls in East Renfrewshire suggest Jim Murphy will be re-elected with a clear majority after an excellent turnout of 130%.

22:32: At the last General Election, not a single Scottish seat changed hands compared with the previous one.  Exactly fuck all chance of that tonight.

22:22: Exit polls suggest 58 SNP seats and just 10 Lib Dems across the whole UK.  Let’s wildly speculate about who has a better opinion about how wrong that definitely is for at least the next hour.

22:11: Well, we’re here/queer/not going away etc. etc.  It’s gonnae be a long night but the drinks cabinet is well stocked.  We’re compiling our most wanted list as we speak…and it’s also very long.

00:00: Join us from 10pm(ish) tonight for insightful/inciteful analysis of the results as they unfold and the almost guaranteed bayoneting of the political wounded.