So, we’re weren’t planning to do this but we’re bored and about to be drunk, so it’s almost definitely a good idea.  Feel free to press F5 to probably get updates about what you saw 5 minutes ago on the. BBC.

06:28: We’re gonnae bow out, since we’ve come full circle.  Scotland is not any more independent than when the night began, nor does Danny Alexander look any less like a giant finger with hair.  We’ll leave you with our eternal slogan.

06:02: And that Kaiedoscot poll put LGBTI Scots as 85% Yes.  So we’re throwing “straight people” into the responsibility ring.

05:59: That map is depressing.   However, we have heard that not only did all the wards in Glasgow go Yes but the one far too many of us live in was the most Yes.  So when the blame game begins, bagsie not us.

05:33: We should have quit when someone said, “the balloon is in the piss” just after Clackmannanshire came in.  Then again, you can tell it’s a decent party when no-one flinches at that statement.

05:31: Willie Johnston in Dumfries, it’s not quite Dick Stiff in Angus but it’s hard to keep up the penal puns at this hour.

05:28: Rumour has it, every constituency in Glasgow voted Yes.

05:20: Coburn’s on ITV now, he doesn’t look tired.  He looks the type who doesn’t sleep and spends a month a year hanging upside down in a cave.

05: 17: We’re powering through.  I’d be here if it was the Euros to be honest.  Just here for the graphs and Scotch pie charts from this point.

04:57: “A protest vote about the conditions in which people live” – Lord Reid totes get it.  Bit late.

04:42: Glasgow coming in 10 mins…will it join the WestDumbartondee Free State?

04:41: It’s been fun watching everyone else get bitter tonight.   Welcome to the Cabal.

03:58; 6000 votes in it.  Sturgeon just walked into Glasgow Count to cheers.  Could we actually still do this?  Can we endure more crushing disappointment??  Did I just have 2 coffees??? YES! YES! YES! 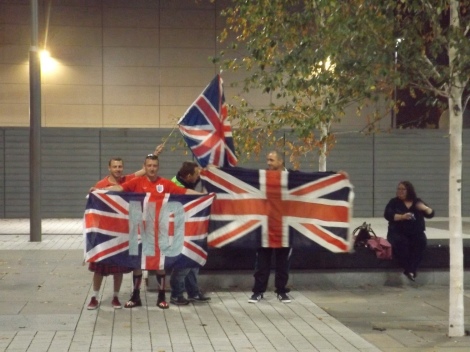 03:38: Better Together party.  OMG.  We look better having had our hearts ripped out.  Imagine if that was you happy.

03:27 – If constitutional settlements were dinners, Devo Max is a Rustlers burger. It’s better than eating a piece n jobby, but is it really that satisfying? We’ll see.

03:21 – We’re basically back to where we were a couple of weeks ago. As long as Yes doesn’t get slaughtered, we’ll have a platform to keep grumbling for the next 10 years. Narrower than 55-45 looks a more realistic target.

03:06: The Deep State certainly don’t seem to want the Dundee declaration to go ahead.  ANOTHER fire alarm.

03:03: The real winner here is whoever figures out what Jackie Bird is doing.

02:51 – We’ve had 3 out of 32 areas declaring. If it was a football match we’d only be 9 minutes in. And I’m always at least 15 minutes late for everything. So lalala shutup stop talking I can’t hear you nay-sayers.

02:46 – John Swinney going bald with the stress of it all. I’d be raging too if I’d polished my head especially for the big night.

02:41 – Despite the fact we have only heard declarations from 2 local authorities, the recriminations have started in earnest. So far we’ve got lizard people rigging votes on Sky News (“there’s a Yes vote in a No pile”) – a mix-up which has been clarified by Yes Dundee – and folk cursing the feckless Glaswegians for their laziness in delivering a record-high 75% turnout. Play nice.

01:55: 75% turnout in Glasgow.  A figure the nation is now analysing fuck out of while we await more numbers.

01:37: Speaking of roasters and homophobes, David Coburn now on the Beeb.  Joy.

01:24: We’re hedging our bets with the bevvy – buckfast and milk, a balanced choice. Wonder what we chose today.  Hopefully not sour milk.

01:15: First declarations now “imminent” “soon” and “shortly” depending on your choice of media outlet.  The nation shites it – or worries that they already have.

01:07: Re: the earlier paranoid outburst

To clarify, ballot papers have not yet been sorted into Yes/No and are just resting on table where No will go once sorted. No need to worry.

00:57: Announcement from Clackmannanshire.  Someone actually went onto a platform to state the results would be available “in due course”.  Riveting.

00:52: Twitter going crazy over a picture of a Yes vote in the No pile.  Let’s keep the tinfoil nat hats off folks, for now anyway.

00:45: Sky & Daily Record reporting electoral fraud in Glasgow as some voters turned up to be told they had already voted.  It amounts to an alleged 10 votes.

00:39: Twitter reporting that Dundee is 95% Yes.  If we confuse turnout and the Yes vote all night, we’ll probably win!!

00:34: BREAKING NEWS FROM THE COUNT: C4’s Paul Mason just finished our correspondent’s whisky.  Maybe he’ll give us some news in exchange but we don’t think there is any.

00:30: BBC looks a bit like a shit episode of Star Trek with Brian Taylor at the bridge.

00:22: “I will have a full blown tantrum in the next half hour” – it’s all getting too much in the Flower household.

00:17: “Low grade intelligence” from Aberdeen that Salmond will or won’t be at the Count.

00:12: We’ve sent a Flower to the Glasgow count, to find out how people are responding to the lack of news there.

00:07:  Henry McLeish, the great muddler is still muddling on voting no, apparently.  The turnout is high.  News remains low.

00:00: They keep playing the clip of Jim Murphy “warning” us to get ready to have to run things.  I think that might have been the point.

23:53: BBC have sent a reporter without a functioning microphone to the Yes Scotland party. BRITISH BIASED CORPORPATION, amirite??!?

23:50: BREAKING – BBC have an update regarding the status of the ballot boxes. Some of them have arrrived, while others have not. More as it comes in…..

23:49: Here’s our projection of how tonight’s exciting STV coverage will unfold.

23:45: Alastair Darling reckons the No side have won. This from a man who looks like a GP but somehow isn’t – how can we possibly trust anything he comes out with?

23:21pm: Discussion now turns to how Obama likes nuclear weapons and cannon fodder.  Not news though.  American news has of course been superior to the biased coverage we’ve had here: 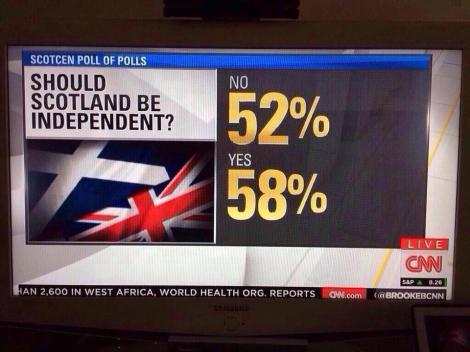 You do the maths…

23:19pm: Are we going to be spending the evening talking about whether Scotland will be an unbroken member (of the EU)?  Ball breaking exciting now,  still no news though.

23:10pm: So, not much going down the now.  Danny Alexander looks like a finger, Gerry Adams refuses to lend explicit support to Yes (whevz) but we are exciting that Brian Taylor will be spending the evening hopping around an interactive map.  Very excited.