On 23rd January 1952, Alan Turing, a man who’s now hailed as a war hero and the godfather of modern computing, had his house burgled.  The Police investigation resulted in his arrest for his relationship with another man. Charged with “Gross Indecency”, Turing was convicted and underwent chemical castration at the hands of the state as an alternative to custody.  2 years later, he was dead.  The burglar was never caught.

It took over 50 years for the laws under which Turing was convicted to change; while homosexual acts between men were decriminalised in 1967 in England & Wales, Scotland didn’t catch up until 1980 and the “Gross Indecency” laws themselves remained on the statute book until 2003.   Thousands of gay and bisexual men have a criminal record for no reason other than their sexuality and many have long campaigned to have these historic convictions overturned.

While Alan Turing received a pardon under royal prerogative back in 2013, the long running campaign to clear his name and the names of all those convicted under similar laws has culminated in calls for an Act of Parliament to pardon them, dubbed “Turing’s Law.”  Many put their faith in Government assurances – the Manifesto on which the Tories were elected was very clear, stating,

Thousands of British men still suffer from similar historic charges, even though they would be completely innocent of any crime today. Many others are dead and cannot correct this injustice themselves through the legal process we have introduced while in government. So we will introduce a new law that will pardon those people, and right these wrongs.

It’s important to note the two distinct groups the Government had promised to introduce this new law to help – let’s call them “the living” and “the dead” for the sake of argument.  SNP MP John Nicholson put forward a Private Member’s Bill this week which would help both groups, as the Government promised they would – and the Government’s representative sat through an incredibly emotional and moving debate before wasting 25 minutes rambling to ensure the Bill ran out of time.

Cue righteous anger online, followed by the predictable headlines demanding we stop being furious cybernats/oversensitive queers and understand the Government does plan to introduce a similar Bill and just didn’t vote for this one coz they really hate the SNP.  Well, that’s alright then. 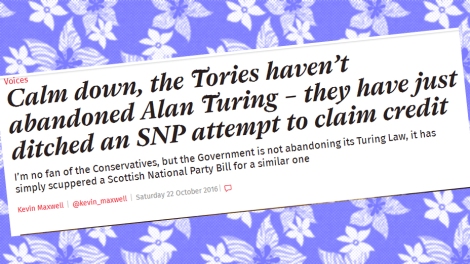 Nothing provokes more fury than calls to “Calm down.”

Except there’s a massive difference between what John Nicholson’s Bill is proposing – which would fulfill the commitment made in the Tory Manifesto, and what the Tories are proposing, which won’t.  [We should be used to the SNP trying to keep the Tories promises for them by now, given the same manifesto which commits to righting the wrongs of historic homophobia also contains the words “we say: Yes to the Single Market” but I digress…]  It’s clear the Tories have no plans to pardon people who’ve committed the heinous crime of having lived through a homophobic branding and shaming by the state: their current plans will grant pardons only to the dead.

Those who’re alive – people who could easily be in their seventies or eighties, could have been to jail, lost their jobs, lived their whole lives with a conviction hanging over them which prevented them from full participation in society – they’ll have lots more bureaucratic hoops to jump through, if they want a pardon. Subjecting people who’ve been through so much already to the degrading process of applying to have their convictions overturned is simply unacceptable.

The excuse from the Tories, that John Nicholson’s Bill would have pardoned people who committed acts which would still be a crime, doesn’t stand up to scrutiny; the Bill contains  a specific clause which ensures this is not the case.   This is solely about the Tories trying to take credit for introducing a shitter version of this Bill further down the line, in a way that disgracefully forces those who’re still alive to have to beg for mercy.

We shouldn’t care whether this is resolved by a Private Member’s Bill, a Government Bill or whether the PM just tells Betty to do it, as happened with Alan Turing’s conviction – what matters is that everyone gets the justice they’ve been fighting for. 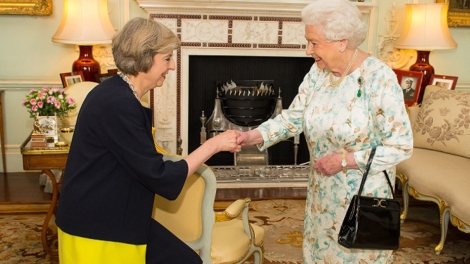 And we should remember that thousands entrapped by the state are unlikely to ever be pardoned.  Many targeted as part of successive Government “crackdowns” on homosexuality, people caught in public places in a world before it was vaguely safe to be gay anywhere other than a minging lavvie, will forever live with the consequences of state sponsored homophobia.

But we should and must care about the Tories attempt to humiliate people who could be helped by this legislation.  We may end up with a Tory Bill, cynically branded with Alan Turing’s name, which sees thousands of men still wrongly criminalised when that needn’t be the case.  There’s a limit to how emotionless we can be expected to be, when the message being sent by the Government to gay and bisexual men is so clear: we’ll pretend to care about what the state did to you, if you’re already dead.

It’s too late for so many who were convicted – but it’s not too late to take a small step towards recognising the hurt caused to those who’re still here.  The Tories must be held to their manifesto commitment: to “right these wrongs”, for the living and the dead, not to play politics with the lives of those who’ve been tarnished by the state.