The boss of a Glasgow based recruitment firm has told his Twitter followers, “I have an anti-sectarian policy… don’t employ Celtic fans…. Simples.” 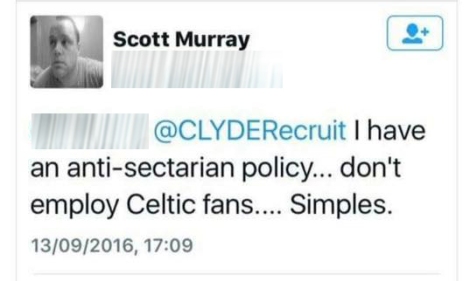 Scott Murray, the Managing Director of Clyde Recruitment based on West Regent Street, made the comments several days ago before hastily setting his Twitter account to private.

Clyde Recruitment was set up by Murray earlier this year after his years in IT left him “frustrated and fed up with the poor service and attitude with the majority of recruitment agencies.”  The firm claim to specialise in “recruiting IT, Financial service and Administration professionals across all sectors.”  Although presumably not the sectors who are “Celtic fans”…as if we don’t know what that’s code for.  It’s perhaps useful to remind ourselves that discrimination in employment, on the basis of religion, is a criminal offence in Scotland, so Mr Murray could find himself in pretty hot water if there were any suggestion his company wasn’t keeping within the law.

For a recruitment firm, Clyde Recruitment don’t quite seem to have understood the point of social media.    You’d imagine an agency would use their presence to advertise their jobs, rather than share generic articles from other recruitment websites and mispelt adverts…but you’d be wrong. 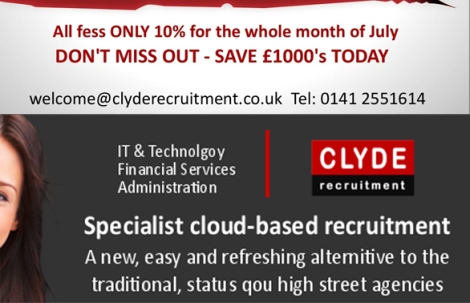 What little advertising is available all boasts of the companies “people first approach.”  As if to clarify who “the people” were in this scenario, Scott Murray helpfully Tweeted this 2 days ago:

There’s not much even we need to say about how spectacularly stupid it is to set up a recruitment firm in Glasgow and then goad a massive chunk of the population on Twitter.   Many are rightly fuming and pointing out Glasgow’s history of sectarianism, particularly in employment – which quite evidentially isn’t history when it’s still happening.

But given Clyde Recruitment has yet to lodge accounts, doesn’t have a functioning website, has 12 likes on Facebook and a private Twitter account (presumably to avoid being spammed with reminders of what their boss said for the next week/forever), we have no way of knowing whether Scott Murray is a successful entrepreneur who’s denied employment to thousands of the huddling masses – or just some fantasist spewing nonsense on Twitter.  If he keeps up his current form, that question will soon answer itself.