Yesterday, 31st March, marked Trans Day of Visibility (TVOD). While we have Trans Day of Remembrance in November, when we pay respect to the many trans people we have lost to transphobic violence and hate, TDOV is a day to celebrate trans lives, identities and accomplishments.  In Glasgow, the day was marked by an event in George Square. 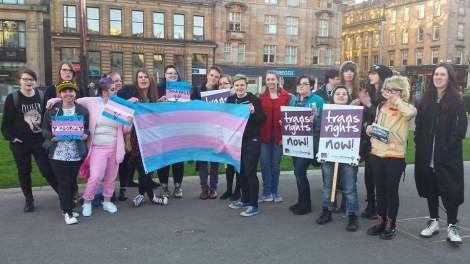 Yesterday was also the day the SNP announced plans for new gender recognition laws which could finally allow non-binary people, who are neither male or female, the basic legal right to have their gender recognised by the state.  Most crucially, there is a pledge to reform the current gender recognition process, to allow trans people to register their genders without going through specific psychiatric and medical procedures, which they may either not want/need or on the flip side, be completely unable to access – some people wait 3 years for their first appointment at a gender clinic.  Any changes in the law are welcome but we need to be careful too, this can’t be an excuse not to pour resources at basic healthcare provision for the many trans people who need and are entitled to it.  But on trans day of visibility, anything which makes many of us more visible can only be a good thing…right?

The notion of trans visibility is complex, and among trans people there are very mixed feelings about Trans Day of Visibility. For AFAB (assigned female at birth) trans people- trans men, trans masculine/AFAB non-binary people- one of the biggest problems we face is invisibility. Cisgender society is less familiar with our genders, and we often go totally unseen, often perceived as butch women, or just not queer at all. Shite as this is, and much as it can still have a devastating effect on mental health, this invisibility is also what awards us a lot of safety, and privilege within trans spaces, in comparison to AMAB (assigned male at birth) trans people- trans women, trans feminine/AMAB non-binary people.

For trans women and other trans feminine people, hyper visibility is much more the issue, and a much more urgent issue, as they face far greater harassment and violence. Celebrating visibility can then seem like a slap in the face, when visibility is the exact problem you’re suffering.

There’s also a danger that we frame it as an issue of confidence- assuming that trans people might not live openly purely because they don’t have the confidence, and that one day like this is an opportunity to change that. There’s a very real issue of safety for many people, and how we come out is often necessarily a delicate process. It’s important that every trans person is given our own space and time to come out as we see fit, if we choose to delay coming out to family members or colleagues or sexual partners, or to never come out in these parts of our lives at all, 100% that’s got to be respected, and no one should ever be made to feel ashamed for being less ‘visible.’ Visibility is a complex fucking thing we navigate, and TDOV can’t just be a call to all to stand up and be seen.

Trans Day of Visibility is most important, not in making ourselves visible to cis people, but in making ourselves visible within the trans community. Often our trans identities and bodies are only seen as valid when we conform to dominant norms of beauty, gender, and race. Only if we appear cisnormative enough, that is, only if we look cisgender enough. This is at its core anti-trans, and perpetuated not just by transphobic cis people (you are of course the main problem but I’ll come for you later), but sometimes by trans people as well. 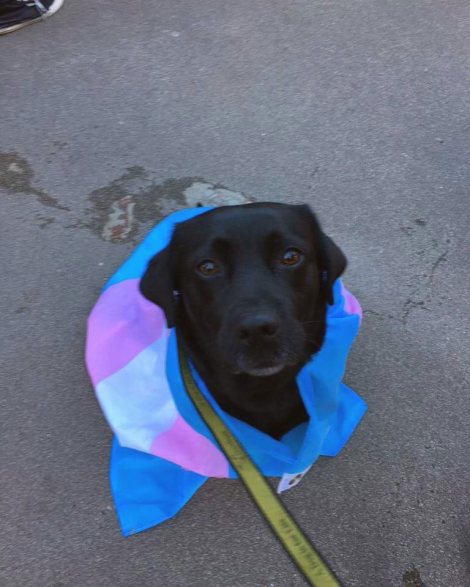 Dogs on the other hand, are part of the solution

From the reddit posts collecting upvotes based on how well someone ‘passes’ (ie how cisnormative they look) to the articles celebrating ‘hottest trans people’ (ie most cisnormative trans people), there’s a toxic attitude towards appearing trans. While there’s absolutely nothing wrong with wanting to appear cisnormative, or feeling that you need to (because yes society is less cruel to you if you do), it’s not always an easy goal or even a goal at all for many trans people. For people just starting out in their transition, having only cisnormative and conventionally attractive public role models can actually hurt more than it helps. Saying ‘look how beautiful trans people can be’ is totally toxic if ‘beautiful’ is synonymous with ‘cisnormative.’ We don’t all have thousands of pounds at our disposal for facial surgery, and shit, some of us are non-binary, or just don’t want to conform to very narrow gender norms. Perpetuating this idea that beautiful=cisnormative increases the internalised transphobia we all face as it is, as we look at our trans bodies and examine all the ways they seem flawed because they’re not cis enough, and this is something we need to tackle as a community. Our aim needs to be to celebrate ALL types of trans identities and bodies.

Trans Day of Visibility has definitely been a day for this, as trans people have blogged, have posted their pictures across social media, and have generally been out supporting each other. In George Square, the people who gathered shared their stories, experiences and outright fucking love and appreciation for each other. It wasn’t just about being a visible crowd in a public place, it was about appearing to other trans people, in a diverse range of ways, and reminding ourselves there’s no ‘correct’ way to be trans. You do you, trans people. 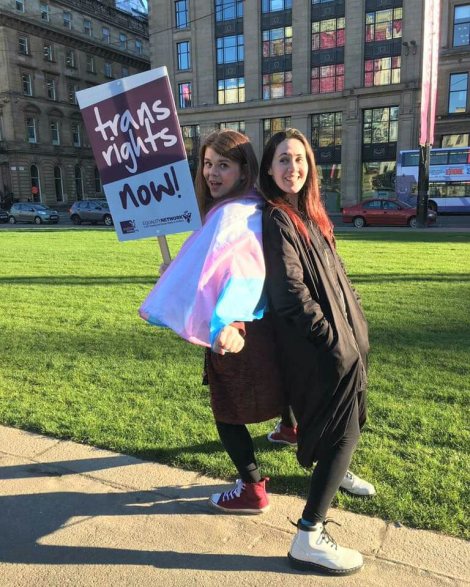 Glasgow demo for trans rights in memory of Leelah Alcorn

Remembrance is not enough while transphobia remians a fatal reality

One response to “Trans visibility, invisibility and outright fucking love”