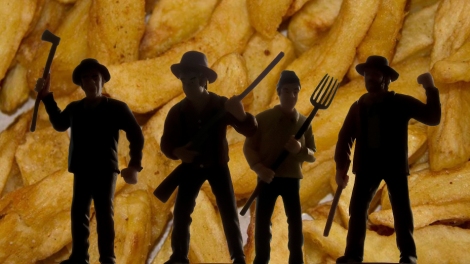 I may not know art but I know what I like – and nothing excites me more than a massive online shitstorm.  Step forward artist, Ellie Harrison, whose latest project, “The Glasgow Effect,” seems to have offended every single human in the Greater Glasgow area.

The blurb for her work is as follows:

The Glasgow Effect is is year long ‘action research’ project / durational performance, for which artist Ellie Harrison will not travel outside Greater Glasgow for a whole year (except in the event of the ill-heath / death of close relative or friend).

By setting this one simple restriction to her current lifestyle, she intends to test the limits of a ‘sustainable practice’ and to challenge the demand-to-travel placed upon the ‘successful’ artist / academic. The experiment will enable her to cut her carbon footprint and increase her sense of belonging, by encouraging her to seek out and create ‘local opportunities’ – testing what becomes possible when she invests all her ideas, time and energy within the city where she lives.

So like many people in the city, someone’s unlikely to leave for the next year, unless something happens.  It reads like the shitest New Year’s resolution in history and after the backlash, Harrison may be considering sending it the way of that new gym membership you’re staring guiltily at.

Everything about the project’s presentation is in some way offensive.  The “Glasgow Effect” is the name given to the fact that people in Glasgow have much lower life expectancies and much poorer health than the levels of official deprivation suggest we should.   Except the project’s really about the struggles of a “successful” artist, eeking out an existence in a major metropolis and artistic hub, with our money.  The “experimental” blurb has given many the boak; dedicating your scarce resources near where you live is a new concept to exactly no-one, it’s what most of the planet does every single day, most for a lot less than £15,000 a year.  To top it all off, the Facebook event was illustrated with a picture of chips…CHIPS!!!  Can you smell the outrage/vinegar? 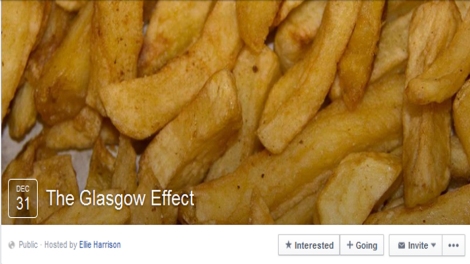 It all reads like a particular insult to Glasgow’s huge artistic, creative, musical and cultural scene: as well as institutions like the Glasgow School of Art and the GOMA, thousands of residents work tirelessly on top of their shit jobs (and for little or no pay) because it‘s what they love to do – if you’re an artist, there are few better places to be stranded at public expense.   We’re not savages hunting down outlanders either, we love artists coming here, like London based collective Assemble, who engaged with residents in Baltic Street in the East End and built an adventure playground for the community.  They won The Turner Prize for their work, at a ceremony which took place in Glasgow.

The thing annoying most people is that someone’s been paid for this.  Most of the comments online revolve around the belief that the £15,000 of Creative Scotland funding could be better spent on absolutely fucking anything.  I’m inclined to share that view and  sympathise with those whose tremendous work in our city goes shamefully unrewarded –  but I hate to break it to you troops, this money would literally never have been spent solving deprivation in the East End or fixing the pavement outside your house, no foodbanks would have benefited from this grant.   I get why this infuriates people, it infuriated me when I saw it but also…come on to fuck.

Nerf Guns and 150,000 10p mixes have been amongst the most popular suggestions.

I enjoy a vociferous discussion about funding for the creative industries as much as the next person and if this one grant really bugs you, then by all means contact Creative Scotland and tell them about the more worthy ways to spend their cash.  I can’t help wondering if we were all so outspoken in our support for community art projects yesterday.  If this is a catalyst for a campaign to properly fund Glasgow’s massive artistic community, Creative Scotland could be forgiven for thinking this will have been money well spent.

But we need to be wary that a social media shitstorm directed at the person who applied for a grant is serving as another excuse for men to engage in horrendous misogyny, body shaming and sending death threats to a woman for no reason.  And there is absolutely no reason.

Beyond this obviously horrible behaviour, the desire to economise everything into oblivion is one of the left’s least attractive and most dangerous traits. “There’s ‘no value’ in this or art in general, so get it and the obviously middle class arseholes responsible for it to fuck.” In an even vaguely civilised society, there should be £15,000 available for many kinds of nonsense.  Artists deserve to be paid, for at least as long as the rest of us have to put up with wage slavery, whether I chose to look at their tumblr or listen to their crappy bands or don’t. We certainly shouldn’t be implying we have to chose between funding the arts and dealing with poverty when we live in one of the richest countries in the world.

I refuse to believe art needs to benefit my cause or advance my ideology and I don’t think I get to decide something’s “not art” just because I personally happen to think it’s a lot of pish.   In an ideal world, I don’t see the problem funding someone’s weegie safari and the fact we don’t live in an ideal world remains not the fault of Ellie Harrison.  A sense of perspective would benefit those inside and outside the art world.

We’re not saying “No Mobs.”

The lack of funding for the arts – or to deal with the myriad of other issues which blight our city – won’t be solved tomorrow, when we’ll (probably) be on to hating on someone else for something totally different.  Nonetheless, it probably shouldn’t require much state assistance to figure out that nothing annoys Glaswegians more than the slightest implication our city isn’t the shining centre of the entire universe, even though we spend every waking hour complaining about what a total shitehole it is.

If our anti-hero learns one thing from Glasgow in 2016, it may be the expression “don’t piss on your chips.”

Eat Your Cereal? Hipsters, Yes men and the demonisation of journalism

8 responses to “The Glasgow Effect, funding the arts and pissing on your chips”